When Jill (Remiticado) Uyeda ’03 arrived on campus in 1999, Pacific University did not have a women’s wrestling program.

Uyeda had recently turned down a full-ride wrestling scholarship to Missouri Valley College, because she was committed to Pacific, where her older brother Randy Remiticado ’02 was already attending. 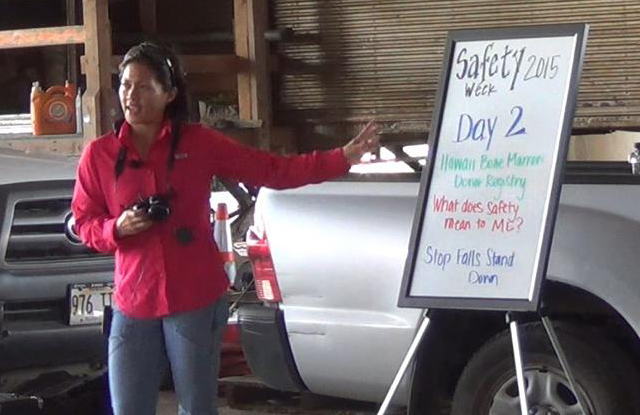 She liked Pacific’s academics and the opportunity to study Japanese along with math and science.

But she didn’t want to give up wrestling entirely.

She requested permission to attend practice with the men’s team.

“I knew I’d be happy if the coach just let me practice,” she said. “I just kept showing up.”

“The only thing she ever asked for was a chance to practice,” her coach, Frank Johnson ’90, later said, as she was inducted into Pacific’s Athletic Hall of Fame as one of the school’s first women wrestlers. “She inspired me more than I inspired her.”

Pacific is one of just a handful of colleges nationwide to offer a women’s wrestling program, and it grew up around Uyeda.

“I guess they built it around me because I was there and I wasn’t going anywhere,” Uyeda said.

At the same time, Uyeda’s love of math and science inspired her to major in physics.

Like wrestling, physics is a field not frequently tackled by women. According to the American Physical Society, when Uyeda was a student, roughly 22 percent of bachelor’s degrees in physics were earned by women.

Pacific offered a welcome environment for her to explore her interest in science, though.

“At the time Jill was a student, we had more women professors than men (in the Physics Department),” recalled Physics Professor Juliet Brosing. “I think it helped Jill see herself as a physics major.”

Pacific has a strong balance of men and women studying science, Brosing said. It can still be a struggle to attract women to physics, specifically, but once they begin, they are well supported in Pacific’s program.

“The physics community here has always been small, but pretty tight,” Brosing said. “Students quickly forget, for the most part, gender roles, and just acknowledge others’ ability to do the physics.”

Brosing, who has worked to bring more women to scientific fields, said she was proud of Uyeda for tackling both wrestling and physics.

“I remember being so impressed that she was involved in starting women’s wrestling at Pacific,” Brosing said. “Jill was tenacious. She was a good student, always working hard. She was very well organized, and never, ever made excuses if she didn’t do well or get something done, which was rare.”

Uyeda competed in the World Team Trains in 2002, but lost to Tela O’Donnell ’05, who advanced on to compete in the 2005 Olympics.

After graduation, Uyeda continued working toward a shot at the Olympics. Though unsuccessful in her bid for the Olympics, Uyeda was not deterred. She returned home to O‘ahu and kept practicing.

She spent the next six years immersed in wrestling culture as a coach at her high school alma mater Iolani School.

“My dream changed from wanting to be an Olympian to wanting to produce a state championship caliber team … I wanted my legacy to be a program of highly competitive girl wrestlers from Iolani,” she said.

In 2005 that dream came true when the Iolani girls wrestling team was the first private school to win a state championship since the tournament added girls to the competition in 1998.

“At first, work was just a placeholder, something to occupy my time before practice,” Uyeda said.

More than a decade later, though, that placeholder turned into a meaningful career with Hawaiian Dredging Construction Co. Uyeda now balances her role as a parent of two with a deep immersion in the massive projects reshaping Honolulu.

She spent seven years as a construction engineer — “That time afforded me the experience and understanding of how the company works” — and eventually moved on to become a health, safety and environment (HSE) professional tasked with the health and safety of the crews during construction projects.

“I’m responsible for the culture of the work place,” she said. “I make sure they have everything they need, including safety.” She’ll soon transition to a focus on the environmental aspects of her work, which will include reviewing project environmental plans, facilitating training, and auditing for compliance.

She relies heavily on her education and her wrestling experience at work.

“Safety is basically helping to educate people. It is coaching and science,” she said. She describes construction workers as “industrial athletes” and takes on the great responsibility of ensuring their safety.

As in wrestling, Uyeda has to prove herself at work, but she relies on her years of experience and the relationships she’s built. “I go to a job site and people already know me.”

She reminds herself, “You’ve just got to stay with it and try to make it work. This will all be worth it in the end.”

Uyeda works hard, but she is deeply proud of her work, which still connects her to her studies in physics at Pacific.