Brosing and her husband, Keith LeComte, live on a sloping 2-acre plot at the end of a long gravel road in Cherry Grove, Ore., some 20 minutes from Pacific University’s Forest Grove Campus, where she has taught physics for the past 30 years.

Nasturtiums bloom on the deck, while an old broken wheelbarrow has been repurposed as a planter for lettuce. There’s a lush vegetable garden fenced off from marauding deer, and the neighbor’s goats and llamas peek in from down the hill.

The hot September afternoon would be idyllic — if not for the periodic gunshots and raucous laughter.

Don’t worry, though: It’s all in the name of science.

For years, Brosing has hosted students from an upper-level classical mechanics course at her home for an afternoon experiment with potato guns.

“Say hello to my little friend,” jokes a student, crossing his Al Pacino accent with a little Arnold Schwarzenegger, as he hoists a black PVC-pipe gun in front of his chest.

The experiment involves filling a chamber in the pipe-gun with propane, then turning a switch to strike a spark inside. The resulting contained explosion shoots the potato out of the tube with remarkable force. Students are measuring the velocity and distance of the potato’s flight in a study of projectile motion.

It’s this kind of creativity in the curriculum that has marked Brosing’s 30-year career at Pacific. It led to her 2012 title as Oregon Professor of the Year, and it is a legacy that will continue at the university after her 2017 retirement. 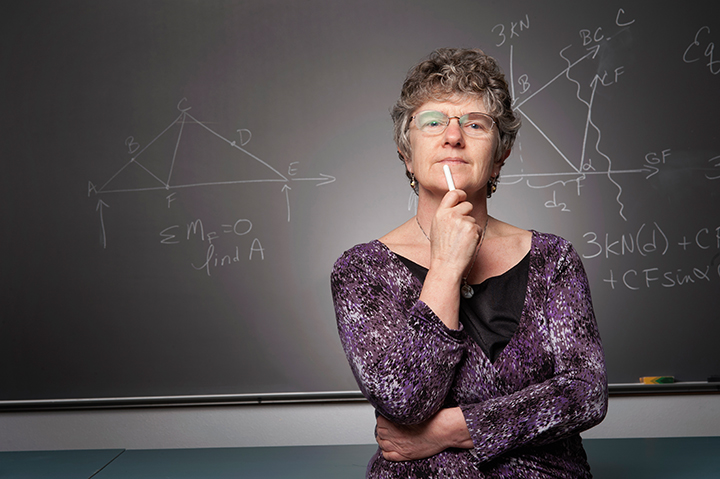 Brosing never planned to become a teacher. For years, in fact, she was adamantly against it.

A California native, she grew up in a tiny rural community, learning to sew (one of her passions) in 4H and spending early mornings doing extra math lessons before school. After graduating high school in a class of 25, pulled together from two neighboring towns, she attended Humboldt State University, intending to major in biology.

She was a self-proclaimed “flower child,” known for going barefoot throughout her time at Humboldt and later while earning her master’s degree at Florida State University. She started wearing shoes during her doctorate years in the colder climes of British Columbia and later during her post-doctorate studies in New York. (These days, she’s almost always shod.)

All along, she was immersed in the idea of doing, not teaching, science. Plus, she says, there was always an underlying attitude that teaching was the “appropriate” track for women in her field, and she naturally rebelled.

“Since I was one of the few women in the profession and felt I needed to prove myself as a scientist, research won, hands down,” she says.

“It was more challenging and interesting, or so I thought.”

It wasn’t until several years later that she realized her career trajectory was taking her away from the lab anyway (“A lot of staff scientists don’t actually do the science,” she explains) and she started looking for other options. A teaching position was the first offer.

“Once I started, I just loved it. I realized it was intellectually challenging and very fulfilling,” Brosing said. 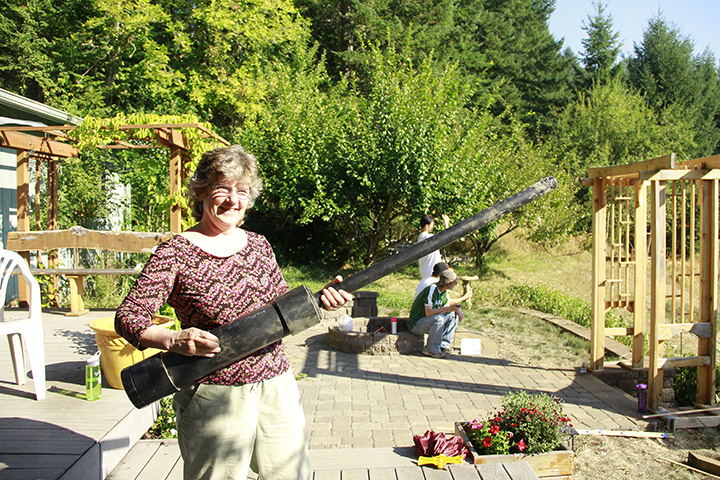 Back at her house, Brosing offers water, tree-fresh apples and occasional advice. (“You know, I should probably go down there and tell them where the poison oak is,” she realizes, mid-experiment.)

The atmosphere is casual but efficient. Students jot down measurements and quick equations in their composition notebooks, in between gossip and teasing. They call her “Dr. Brosing,” not Juliet, but they make friends with her husband and rescued wire-haired dachshund, Walter.

Throughout her 30 years at Pacific, Brosing has had an integral role in moving the Physics Department to its current project-based curriculum. Retired Professor Mary Fehrs, Brosing’s first mentor at Pacific, started the process, and Brosing was quick to see the value. There are few lectures in the program, and every upper-level course features a lab component (a rarity in most physics programs).

Pacific was one of the first universities to put physics education research — scientific studies of how people learn and understand physics — to work in the undergraduate classroom. What that means is that experiments like the potato gun project are the rule, not the exception, and that they work.

“… There is an average increase in understanding of only 17 percent when the force and motion concept is taught in a traditional introductory physics lecture environment,” former College of Arts & Sciences Dean John Hayes wrote in a letter supporting Brosing’s 2012 Professor of the Year Award. “Dr. Brosing, in contrast, achieves a remarkable average increase of 72 percent.”

“There is real value in these types of projects,” she says. “They are learning the same physics, but in a context. They will retain more. They learn other valuable skills. And they have fun, they really get into it.” 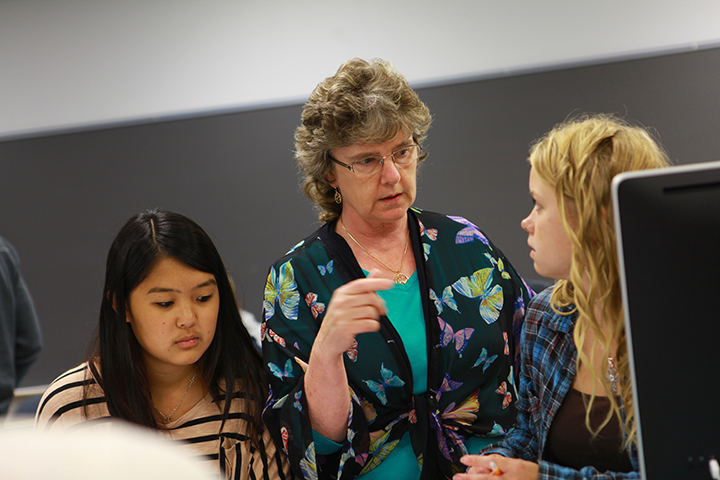 Where are the Girls?

When it’s time to shoot the potato gun, Brosing encourages one of the few women in the class to step up.

Nationally, the number of physics majors is small: Fewer than 0.3 percent of all undergraduate degrees conferred in the United States are in physics. Among those, the number of women graduates is miniscule.

It’s been that way as long as Brosing can remember.

She realizes, in retrospect, that her inspiring, female high school physics teacher was an extreme rarity.

In her own research career, she experienced discrimination, but, she says, “I ignored it.

“I wasn’t working for women in science, I was just doing it.”

These days, her advocacy is more intentional.

In the 1990s, she and others at Pacific started a summer camp for middle school girls to get them — or keep them — in science, and she and Computer Science Professor Shereen Khoja relaunched a similar camp a few years ago.

“When girls came to camp, they’d say, ‘I didn’t know there were other girls like me,’” Brosing says. “It’s disturbing that 20 years later we’re still hearing that.”

The lack of interest isn’t innate, she said; it’s taught.

“There’s a stereotype of scientists in a white lab coat, glasses, and they don’t see anyone. That’s not how science is done, but young girls see it and decide they don’t want that isolated life,” she said. “It’s a stereotype. That’s one of the ways we, as scientists, have failed.”

So, Brosing focuses on defeating that stereotype by reaching young girls before they abandon the pathway to math and science, often in junior high.

“Someone who is good at science and math might be good at a lot of things. They have a lot of options open to them,” she said

If girls get more praise for their skills in the arts than in science — or worse, if they get negative feedback for their interest in math and science — they’re likely to change course.

“We want to give them ammunition before they get into high school,” Brosing said. “In kindergarten, there’s equal interest [in science, among boys and girls]. By high school, it really narrows down.” 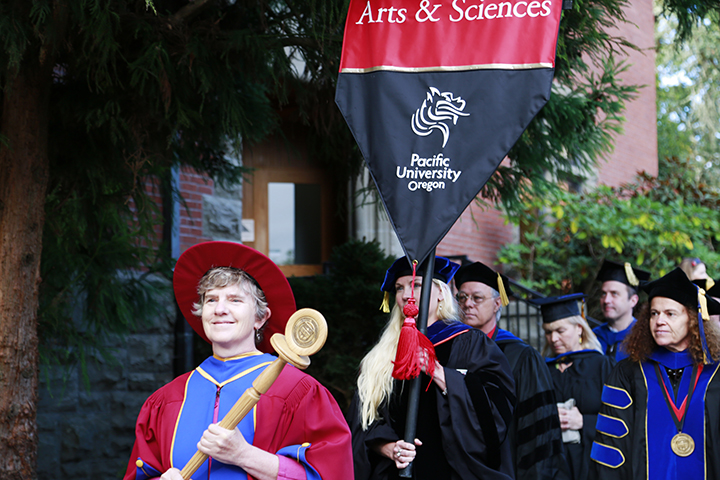 Joel Hoyt ’93 didn’t come to Pacific University with a particular interest in physics.

One of Brosing’s former student advisees, he had a vague notion of interest in physical therapy but, he says, he was mostly just following his high school sweetheart.

“I am careful not to refer to myself as a student, at that point in time, as I had little aptitude or motivation to that end,” he wrote.

Brosing, he says, helped him discover his academic strengths (mathematics), a cohort of like-minded peers (through a physics dinner) and, ultimately, a way to transform academics into a career through health physics.

Today, he’s a project manager for the Battelle Pacific Northwest National Laboratory and says Brosing has been “the most influential person in my academic and professional life.”

Kristine Callan ’05 credits Brosing not only for introducing her to physics but also for being a mentor after graduation.

“Despite my preparation, I must admit that at times I struggled to find my way in the intense and male-dominated environment I found myself in post-graduation,” writes Callan, who earned a PhD in physics at Duke University and now teaches at the Colorado School of Mines. “Even though I was across the country, Dr. Brosing found many ways to reach out to me: We exchanged emails and Facebook messages, she invited me to dinner on one of her visits to the East Coast, and we even began playing online games of Scrabble (of which I have yet to claim a victory).”

Those stories are what Brosing holds dear.

“The best part is that with some students, you touch lives and make a difference,” she said. 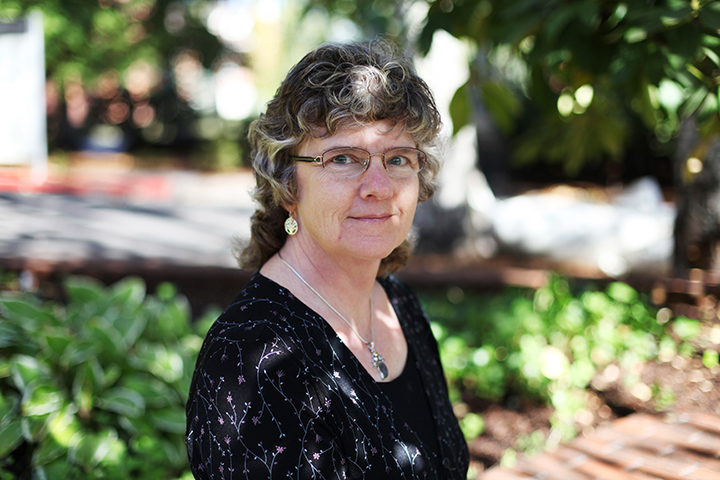 As she retires in June 2017, Brosing is looking for new ways to continue touching students’ lives from beyond the classroom.

Brosing hopes that those who want to honor her career at Pacific will join her in contributing to the funds — and her retirement celebration will offer an opportunity to do so.

The celebration will take place at 6:30 p.m. Friday, May 5, at Vernier Software in Beaverton. Tickets are $15 and available online through April 20. The evening will include drinks, dinner and a silent auction — all benefiting Brosing’s chosen funds “I really want my legacy to be these endowed funds,” she said. “I love the idea that years from now, students could be doing research and getting scholarships in my name.

“That’s what I want to leave.”

This story was originally published in 2012 and was updated in advance of Brosing's 2017 retirement.