Pioneering Woman Lawyer Got Her Start at Pacific University 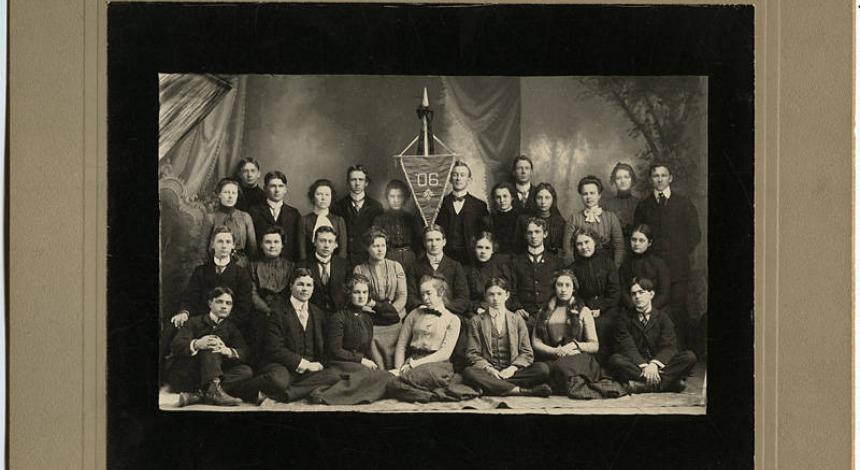 Manche Langley was one of the matriarchs of women lawyers in the Portland area in the 1900s. The 13th woman admitted to practice in Oregon and a founder of the Queen’s Bench — a professional organization of women in law — Langley got her start at Tualatin Academy, the predecessor of Pacific University.

Langley was enrolled at the Tualatin Academy from 1898 to 1900. At the time, the academy was advertised as a three-year preparatory school, said Pacific University Archivist Eva Guggemos.

The academy offered “thorough preparation for the Classical, Scientific and Literary courses at the College, and [at] the same time offers special opportunities for those desiring thorough training in the common English branches,” according to the 1901 Register of Tualatin Academy and Pacific University.

Langley spent three years at the academy, then went on to study at Pacific University as a special student from 1900 to 1903. That meant she could earn certificates in proficiency from particular departments but wasn’t necessarily on a degree track.

“She would have been able to take college classes, but she didn’t advance formally along with the other students, and she did not have to take all of the required courses,” Guggemos said.

“She may not have thought it was necessary to get a formal degree, but instead took only the classes that were relevant to her chosen career.”

At the time, lawyers were not required to attend law school.

Historic photos also show Langley spending time with the Pacific University Archery Club, though she is not listed as a formal member.

In 1927, she earned a bachelor of law degree from Northwestern College of Law, which later merged with Lewis & Clark College in Portland.

She then lectured in several law-related courses at Pacific from 1928 to 1934, before going on to her distinguished law career in Portland.

Langley worked to enable women to serve as jurors in Oregon, a right passed into law in 1921. She served as president of the Women’s Lawyers’ Association in 1926, then as second district province director for Phi Delta Delta, an international women’s legal fraternity. She was a member of the League of Women Voters from 1925 onward.

During the Franklin Delano Roosevelt Administration, she worked overseeing the building of Timberline Lodge on Mt. Hood. She was active in the outdoors as a member of the Mazamas, a nonprofit mountaineering education organization in the Portland area, and she climbed Mt. Hood several times, according to her relatives.

In 1948, she helped found The Queen’s Bench, an independent nonprofit organization of women lawyers, which still works to promote the professional advancement and camaraderie of women in the legal profession.

She also volunteered for the Oregon Prison Association, serving as its vice president in 1949, and was active in the Democratic Party, serving as national committeewoman for Oregon.

At the time of her death, July 15, 1963, Langley was still practicing law with Multnomah County, where she served 17 years as a deputy district attorney.

A tribute to Langley, written in 1964 by another distinguished Portland-area attorney, Helen F. Althaus, said Langley was not only a dedicated lawyer but also a person of many talents.

“She was something of a connoisseur of art, western and oriental. She was a lover of poetry, literature, theatre, ballet,” the tribute said. “Manche was a humanitarian. Despite her efforts at anonymity, Manche’s ever-impulsive, unselfish generosity to those in need became legendary in her lifetime.”