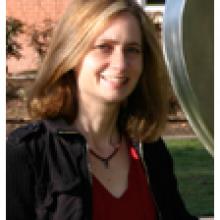 Pacific University mathematics professor Christine Guenther is among a select group of academics who presented during the 2018 John H. Barrett Memorial Lecture Series at The University of Tennessee, Knoxville, held May 29-June 1.

Dr. Guenther, whose research includes geometric evolution equations, presented The Second Order Renormalization Group Flow as part of the 2018 series theme, "Mean Curvature Flow." Her lecture was one of the 10 to comprise the 2018 Barrett lecture series, with other scholars representing the likes of MIT, Johns Hopkins University, Rutgers University, NYU Courant Institute and the University of Toronto.

"The Ricci flow appears in physics as the first order approximation of the renormalization group flow that arises from the nonlinear sigma model in quantum field theory," Guenther described in her abstract. "In this presentation we introduce the fully nonlinear second order flow and compare it with the Ricci flow, considering for example scaling properties, parabolicity, and special solutions. We further present a new entropy for the flow."

The John H. Barrett Memorial Lectures were established as a tribute to Dr. John H. Barrett, Mathematics Department Head at the University of Tennessee from 1964 to 1969, upon his death in 1969. They have been held annually since 1970 in a variety of mathematical fields by a succession of distinguished speakers.

Guenther has been a member of Pacific's College of Arts & Sciences faculty since 1988 and received Distinguished University Professor status in 2016.