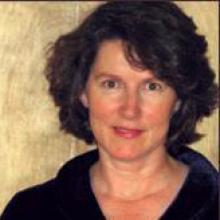 Ellen Margolis, professor of theatre and Theatre and Dance Department chair at Pacific University, has been honored by the Portland Civic Theatre Guild for excellence in local theatre.

Margolis received the Drammy Award for Best Original Script of the 2017-18 season for her play, Pericles Wet, at the guild's annual honors ceremony on June 25. The Drammys are the highest honors the guild annually bestows on Portland-area actors, directors and designers.

Pericles Wet is an adaptation of one of Shakespeare's more obscure plays, Pericles, Prince of Tyre. Like the original, Margolis' adaptation finds Pericles fleeing his homeland by ship after a dangerous encounter and having strange, troubling and hilarious adventures. Pericles Wet, however, focuses more on an abusive situation the protagonist witnesses in the first scene that prompts questions of what an individual's responsibilities are when they witness horrific events.

Pericles Wet was commissioned by the Portland Shakespeare Project, which went on to produce the play last December, where it ran at the Arts Hub in Portland under the direction of Michael Mendelson, a resident artist at Artists Repertory Theatre. The production received rave reviews by Willamette Week, Broadway World and Oregon Arts Watch, particularly in light of its proximity to the national Time's Up movement against sexual harassment.

When first seeing Pericles, Prince of Tyre at Northwest Classical Theatre several years ago, Margolis said she found the show enchanting, but was also troubled that the first scene told a story of abuse that was never revisited in the rest of the play.

"I always felt like I had unfinished business with the play, which is what led me to my adaptation," she said.  "In Shakespeare's play, Pericles simply takes off and travels the world after learning of a young woman being abused by her father. But in my play, he is haunted by whether he could have helped her, and ultimately makes his way back to try to do right by her."

The Drammy is the second of Margolis' career, and she joins fellow Pacific faculty member Tal Sanders as a two-time Drammy Award honoree. In addition to Margolis, another Pacific University community member received a Drammy honor for outstanding work. Alec Lugo '16 received a Drammy Spotlight Award, which recognizes individuals who do things behind the scenes for the Portland area theatre community. Lugo, a marketing and development assistant with Bag and Baggage Productions, has worked both on stage and backstage on a large number of productions throughout the metropolitan area over the past two years.

Margolis is a founding member of Playwrights West, a Portland-based theatre company, and member of both Dramatists Guild and the International Centre for Women Playwrights. She has received commissions from Portland Shakespeare Project, Mile Square Theatre, and the Susan G. Komen Foundation, and her work has been widely published and recognized nationally by the New York International Fringe Festival, the Trustus Foundation, and Jane Chambers Competition, among others.

The Portland Civic Theatre Guild is a volunteer based, non-profit organization that enriches the Portland theatre community by giving annual awards to students, theatre companies and individual artists while bringing audiences the highest quality, professionally staged readings Portland has to offer. Since 1979, the Drammy Committee consisting of guild members has striven to promote live theatre in Portland by recognizing and rewarding the outstanding work of Portland-area actors, directors and designers through the Drammy Awards.

Theatre studies at Pacific develop and encourage creativity, collaboration, critical thinking and communication. Faculty are committed to a high standard in the performing arts and to the rigorous study of performance from a liberal arts perspective. For more information, visit pacificu.edu/theatre.