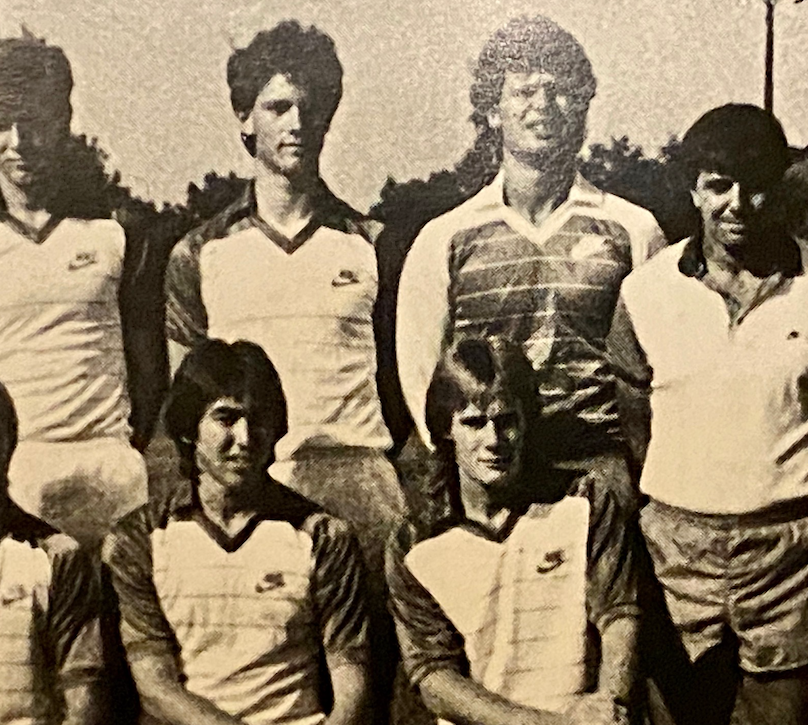 Former Pacific University men's head soccer coach Jimmy Conway died in Portland Feb. 14 at the age of 73. He fought a decade-long battle against trauma-induced dementia. Conway, at right in the accompanying picture from the 1987 yearbook, coached the Boxers for five seasons, beginning in 1983.

By the time he arrived in Forest Grove, Conway already had Hall of Fame credentials as both a player and coach in top-tier leagues in the U.S., England and his native Ireland. Born in Dublin in August 1946, Conway began his senior career in 1964 with his hometown Bohemian FC, then an amateur club but the oldest club in the country and a member of the very top division in the League of Ireland. He played 44 matches for “The Gypsies” and scored 10 times before a move to the Football League in 1966 with Fulham FC, one of the major London clubs. He spent 10 seasons with the Cottagers, then moved to Manchester City for two years.

During his time in English soccer, Jimmy was also called up 20 times to represent the Republic of Ireland, scoring three goals.

In 1978, the Portland Timbers signed him as both a midfielder and captain and he led the club back to the playoffs with a 20-10 record. In 1980, his final year as a player, the club gave him the added responsibility of assistant coach.

Conway and Jim Brazeau, a later Boxer coach, would also serve as assistants for the third version of the Timbers in the A-League/United Soccer Leagues. Conway served as an assistant coach during the period 2000-2005. In 2011, the Timbers inducted him into their “Ring of Honor.”

In 1981, Conway became director of coaching for the Oregon Youth Soccer Association. He held the job for 28 years, guiding elite youth teams in regional play and training parents in proper coaching techniques. During his time with OYSA, he helped develop coaching programs to serve the more than 24,000 youth players registered at that time. He also helped 1,100 adults get their US Soccer Federation coaching licenses.  Conway himself earned his “A” level certification in 1991 and eventually join the US Soccer Federation's national coaching program.

In 1983, he took over the Pacific program, finishing as the Boxers' second-winningest coach in program history with a 51-37-9 record.

After leaving Pacific, he was hired as Oregon State University's first head coach of its men's varsity program, a position he would retain for 11 years despite commuting 160 miles each day to the Corvallis campus for practices and games. He is the winningest and longest-serving coach at OSU (97-88-14 for a .523 win percentage). While at OSU, he was twice selected as conference coach of the year and still holds numerous program records for both season and career play at both schools.

Conway was diagnosed with trauma-induced dementia in 2009. When his medical diagnosis was determined, former Timbers player Mick Hoban, his wife Linda, members of the Conway family and a group of volunteers spearheaded plans to honor Jimmy. In 2010, a series of events including a testimonial dinner at the Nike World Headquarters in suburban Portland reunited Jimmy with hundreds of former youth players and coaches, teammates from Irish and English playing days, college administrators and U.S. Soccer and Oregon Adult and Youth Soccer representatives. Pacific was part of that tribute, honoring Jimmy at a men's match in fall 2010 and making Jimmy an honorary letterman.

Survivors include his wife of 50 years, Noeleen, sons Paul and Mark, daughter Laura, eight grandchildren and 10 siblings. Private funeral services details will be posted on Jimmy’s Facebook Page (Fans of Jimmy Conway) when they are finalized. In lieu of flowers, the family suggests contributions toward research on Chronic Traumatic Encephalopathy (CTE), a neurodegenerative disease associated with contact sports.