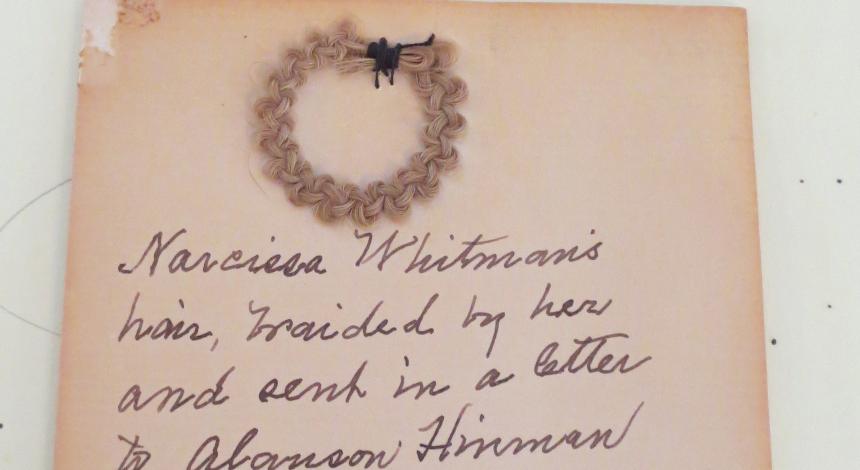 It’s not surprising that Pacific University has collected a bit of history in its 160-plus years.

But the pieces of history themselves can, at times, surprise.

On a recent summer morning, docents and staff working at the Old College Hall Museum uncovered a piece of history of interest to local researchers.

“Many of you who grew up in the Pacific Northwest probably learned about the ‘Whitman Massacre.’ Marcus and Narcissa Whitman .. along with 12 others, were murdered by members of the Cayuse Tribe in 1847. The context was complicated …

“It is not commonly known that after their deaths, the Whitmans were buried in a shallow grave and their bodies were desecrated by wolves. People who came later to re-bury them took locks of Narcissa Whitman’s hair as souvenirs and sent them to various people around the country. Over the years, the Whitmans became symbolic martyrs of the pioneer period, and Narcissa, in particular, became mythologized as a symbol of pioneer women.

“… Over the past two years, we in the Archives had heard several rumors that one of the locks of Narcissa Whitman’s hair was in the Old College Hall Museum collection. We have had to requests just within the last few months for us to track it down.”

As it turns out, the collection did include a lock of Narcissa Whitman’s hair, in a box of stored items not currently on display. However, the lock is not from her grave; it is one she cut, braided into a small wreath and sent to Alanson Hinman, who had taught school at the Whitman Mission and later moved to Forest Grove, where he became an early trustee of Pacific University.

Coincidentally, George Williams, one of the Old College Hall Museum docents, is the great-great-great grandson of Hinman, and he was there for the discovery.

The hair ultimately was turned over to the Pacific University Archives, where it will be accessible to researchers and others who are curious to see it.

In the meantime, a wealth of other historical artifacts remain in the Old College Hall Museum, which is open for self-guided tours and docent discussions from 1 to 4 p.m. the first Wednesday of each month. The museum also now is accessible in a virtual tour online.