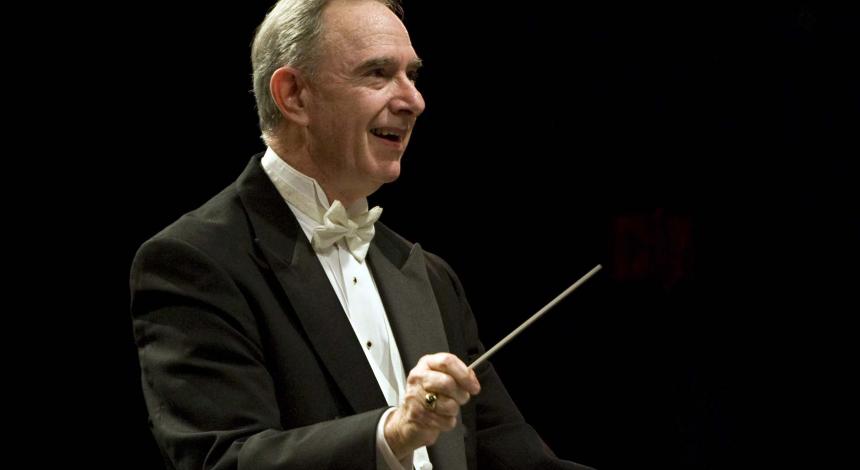 “From the time I was in junior high, I always knew I wanted to teach,” says Michael Burch-Pesses, Pacific’s director of bands.

Now, a few decades and many musical milestones later, he’s still living his dream, he says. “I just consider myself so incredibly fortunate…because I get to do what I love to do and have a great time.”

Burch-Pesses currently directs students in the Jazz Band, the Pep Band and the University’s Symphonic Band.

In addition, he is the conductor and musical director for the award-winning Oregon Symphonic Band.

Comprised of musicians ranging in age from 20 to 80, it is considered to be the state’s premier adult band and has performed nationally and internationally.

He is also the director of the Music in May festival, which brings some 450 high school students to the Forest Grove campus for three days to perform under some of the best conductors in the country.

Burch-Pesses joined the Pacific faculty in 1995, after a 33-year career in the U.S. Navy. When he enlisted in the 1960s, the Navy gave him a guaranteed position in its School of Music.

After boot camp, he played French horn in the Navy Music Program. He re-enlisted after his first four years, earning officer status as a Navy Bandmaster in 1971.

While in the Navy, he earned a bachelor’s degree at the University of the State of New York at night, and later a master of music and doctor of musical arts in conducting from Catholic University of America.

Burch-Pesses worked his way up to senior bandmaster and head of the entire Navy music program, as well as teaching at the U.S. Naval Academy in Annapolis, Md.

When he retired from the Navy, he says, “I was still very young…the idle life was not for me.”

So, he applied for college teaching positions, came to Pacific for an interview and found the students to be “just the most wonderful students you could have.” During that initial interview, music students took Burch-Pesses for a lunch, but he says, “I never got to eat lunch because they peppered me with tougher questions than the search committee.”

However, once he got here, “my first rehearsal was with 19 students and seven were flute players…so I started recruiting the next day.”

And the best part, Burch-Besses says, are the students. “Man, oh man, they just energize you,” he says.

One can often see Burch-Pesses on his twice-daily walks around the Forest Grove campus with his dog, Moose, a rescued whippet who sleeps in the music professor’s office during the day.

Moose also is a magnet to students, who sometimes come to his office just to visit the dog.

“You can see their stress meter go from red to ‘I can deal with life again,’” he says.

Being a music professor has been a wonderful life, says Burch-Pesses.

“Every day that I come in I know I can throw myself into what I do with my whole heart.”  n