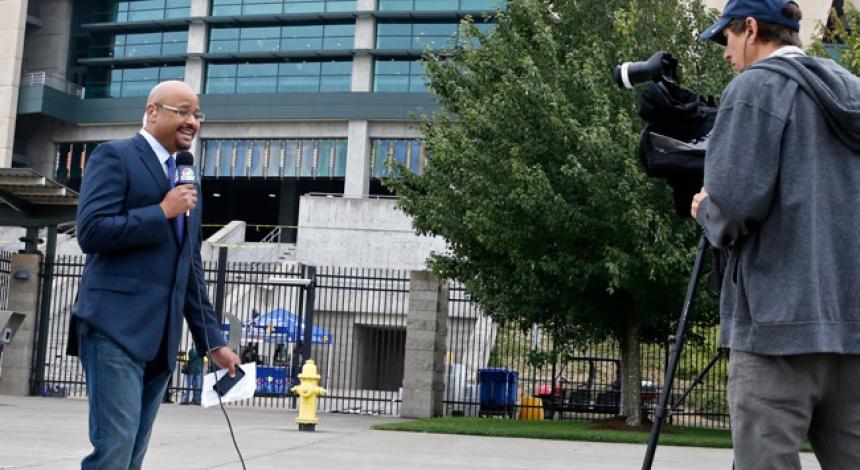 Aaron Fentress ’91 is a guy who likes to hold his own in an argument.

Catch him on Talkin’ Ducks, the weekly cable TV program, and you’ll see him engaging his co-panelists in a variety of arguments about the University of Oregon Ducks. Chief among the combatants is former Oregon quarterback Joey Harrington, who is also a former NFL player and doesn’t back down from verbal thrusts.

For hardcore football fans, it’s like watching verbal boxing. After the match is over, comments pop up all over the Comcast SportsNet website about who is right.

Even Fentress’s two children, Payton, 7, and Taryn, 8, take notice. When he comes home from a show, he says, they’ll call, “Daddy! We saw you arguing on TV with that man.”

Well-known as a sports writer for The Oregonian, where he worked for some 21 years until this fall, Fentress is a television sports commentator and writer for Comcast SportsNet with a variety of roles. He appears on the sports shows Talkin’ Ducks and #DucksFootball. He covers the Ducks’ football, basketball and baseball teams for the website CSNNW.com. He interviews players on camera and, on game days, either appears in the studio for pre-game shows or broadcasts live.

Finding His Way to Pacific

Fentress played football himself, first at Grant High School in Portland, then on a partial football scholarship at Portland State University. But, he said, he wanted to major in journalism, a program not then available at PSU. Instead, he picked psychology as a major.

On a bit of a lark, he visited Pacific University with a friend, Craig Lisko ’91, during the winter of 1988.

“I thought to myself, ‘I really don’t want to live in Forest Grove,’” he recalls with a laugh. “I had no intention of transferring.”

When he saw a journalism/communications degree in the handbook, though, he changed his mind.

He and Lisko both transferred to Pacific during the winter term of 1989.

Fentress wrote for The Pacific Index, serving as a sports editor his senior year. He credits David Cassidy, associate professor of media arts, as instrumental in stretching his abilities by forcing him to cover more than sports.

“I hated him for it then,” Fentress says. “But I learned the value of it later.”

Fentress also played football during the two and a half years he studied at Pacific, though it wasn’t the best time for the sport.

“No one cared much about the program,” says the former wide receiver.

Pacific dropped its football program in 1992 and renewed it in 2010 with a new stadium, field and coaches. In the fourth year of its new life, the football program now enjoys popular support among students and alumni, and the team kicked off the year with a school-best 5-0 start on the season.

“The fact that now the school went out and brought it back, it’s better off,” Fentress says. “The school saw the value in having it, and it’s good to see it return.”

Fentress not only writes and comments about football, he’s also a coach. For the past 11 years, he’s coached semi-pro football, and his teams have won five league championships, four Northwest titles, and have been ranked among the country’s best semi-pro teams. He recently became head coach and part-owner of the Portland Raisers.

“I love the complexity of football’s choreographed brutality,” he says. “A lot of people wouldn’t understand … it’s really very technical, very strategic with a lot of elements in it, but unfortunately, very violent.

He adds, however, that his wife, Tracy Fentress ’92, who attended Pacific and later earned a pharmacy degree at Oregon State University, is adamant that their kids won’t play. (Fentress’s 24-year-old son Isaiah, also grew up not playing football.)

While many sports-minded Oregonians know Fentress by name for his writing in The Oregonian, he says the path there was a long, hard process.

Fentress wrote a weekly column for a community paper, The Portland Observer, while he was a senior at Pacific. His first year out of school, he worked part time in a baseball card shop in Forest Grove then another one in Hillsboro. He began working as a sports clerk at The Oregonian in 1992, answering phones on Friday nights for sports scores and filing stats and photos.

In 1993, he got a two-year internship at The Oregonian, but it had nothing to do with sports.

“It was painful,” he says. “Here was a guy who wanted to cover sports, but I was covering the blueberry festivals.”

He also covered a murder trial in Gresham and community news in Forest Grove and Cornelius before landing on the general assignment desk, where he staked out Tanya Harding, the U.S. figure skating star who hatched a plot to assault her rival Nancy Kerrigan during U.S. figure skating competitions.

Finally, he says, “After six and a half years of kicking and screaming the entire time … finally, they magically, mystically moved some pieces around and put me in sports.”

He began his sports reporting career covering high school sports, including Forest Grove, then went on to cover sports at PSU and, finally, both college and professional sports in Oregon and Washington, including the Seattle Seahawks and Mariners.

Leaving The Oregonian and moving from writing to talking about sports has been a transition, Fentress says.

“It takes some getting used to,” he says, adding that he always typed as fast as he could while writing.

“My processing of information is really fast … but (on television) you have to slow down. … It’s basically training your brain not to try to get everything out in 30 seconds.”

Plus, he says, on a computer, “You have time to backspace, but you can’t backspace on TV."