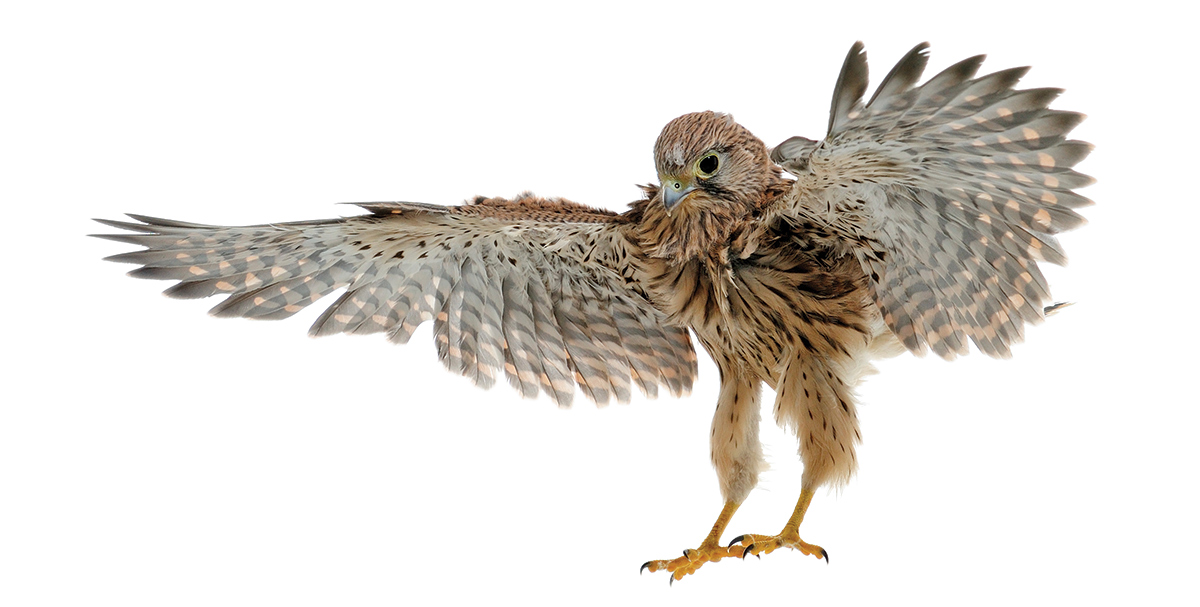 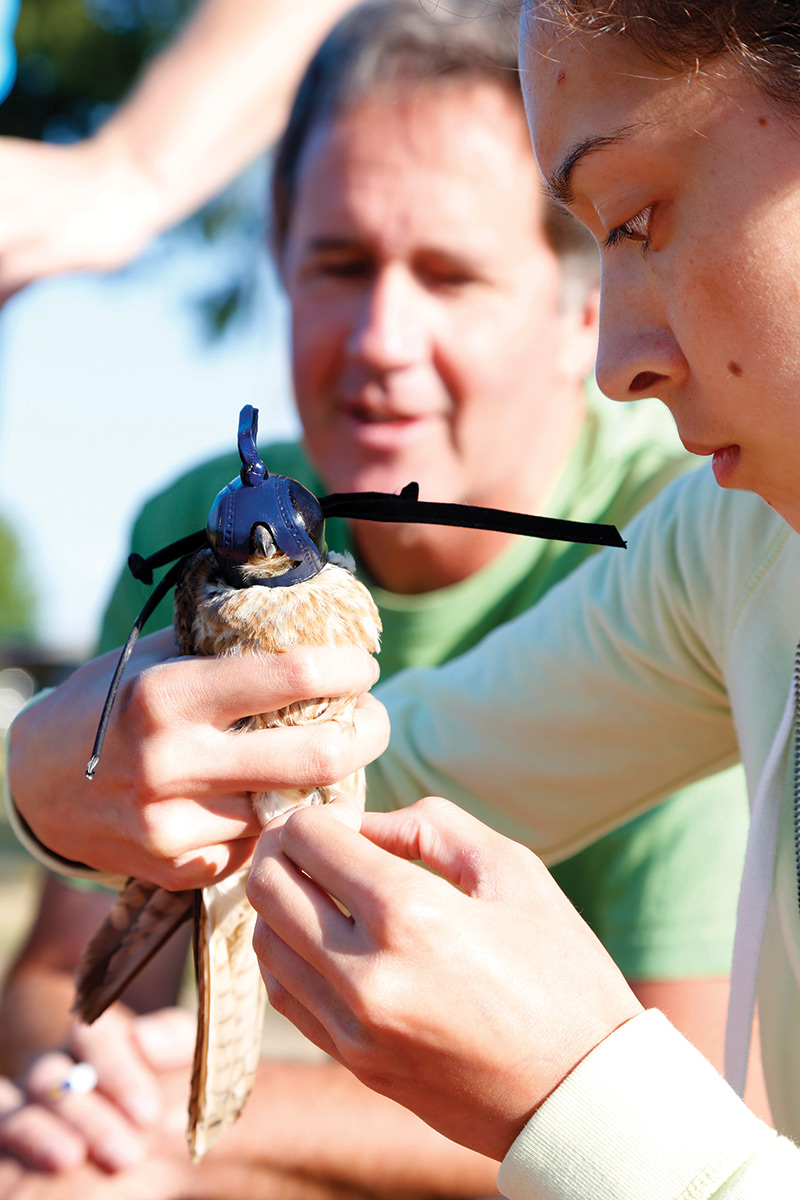 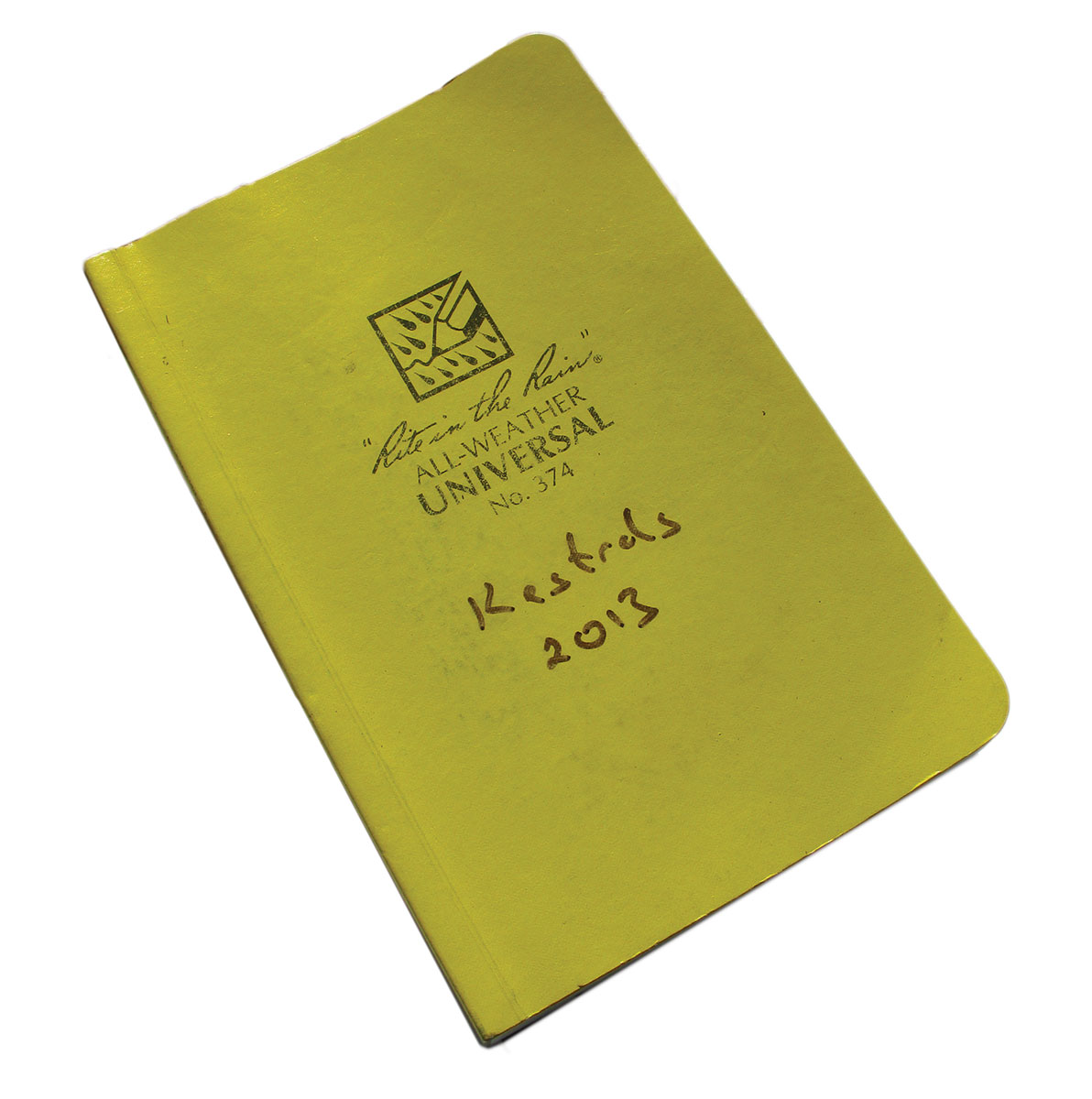 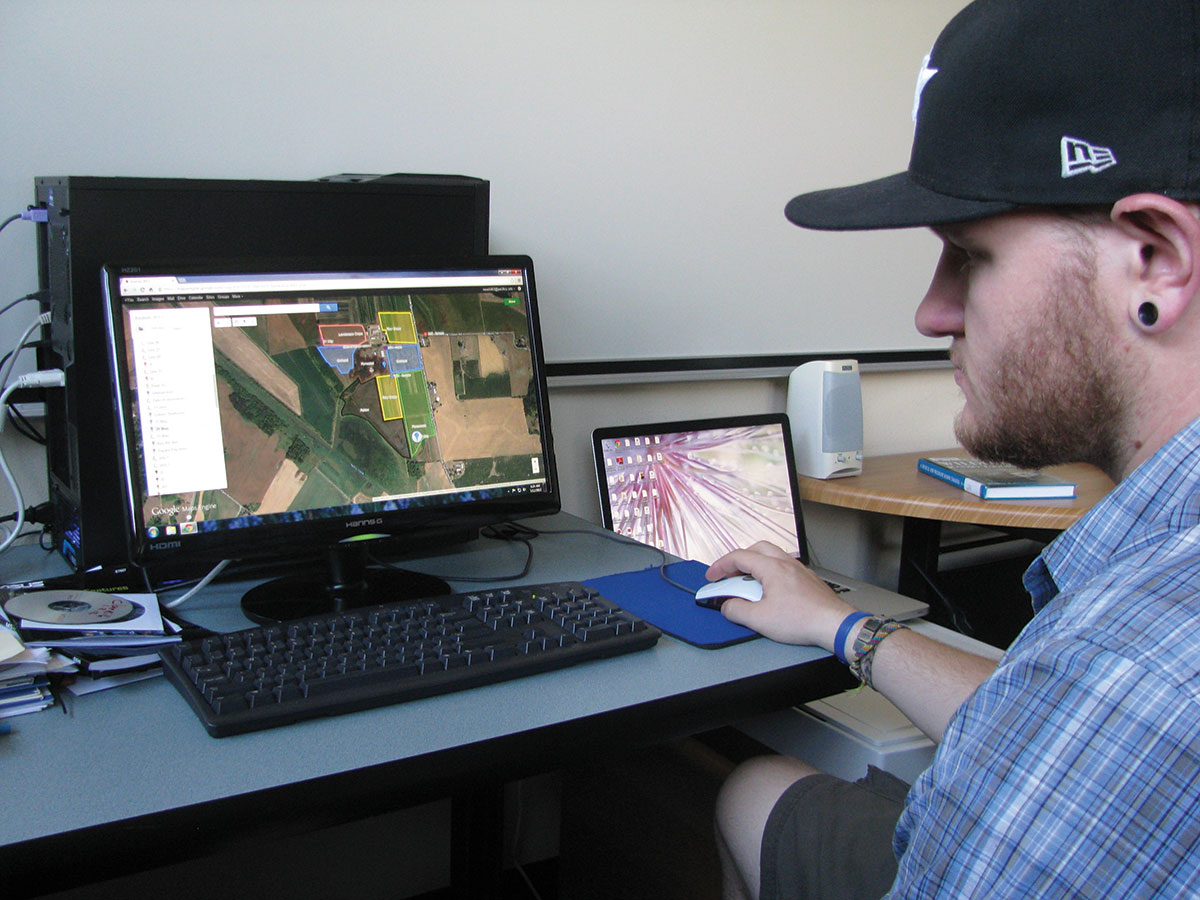 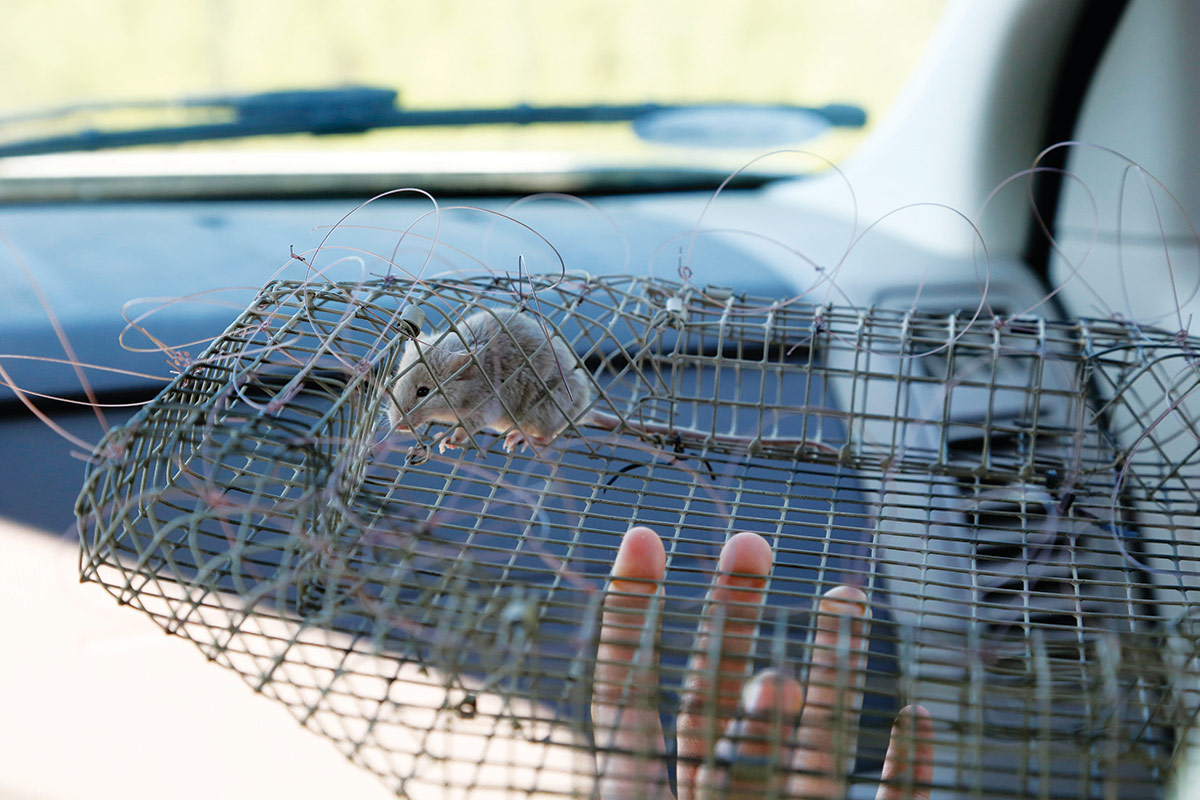 Professor Rich Van Buskirk talks Kelsey Brown '14 through the examination of a wild kestrel they will tag for tracking.

Notebooks like this one are used to take notes in the field, without a worry of ruining the paper.

A small mouse used to lure the Kestrals for research.

There are mice in the car.

Two of them: Quiet little rodents in a shared cage, sipping at a water bottle and running on a brand new red exercise wheel.

Little do they know, they are bait on this early morning in July.

They ride in the backseat of an ultra-quiet hybrid Ford Escape with me and senior Kelsey Brown. Senior Nikk Novero rides shotgun, while Environmental Studies Professor Rich Van Buskirk steers us down a rural gravel road.

Less than a mile from Pacific University’s Forest Grove Campus, we’re in the heart of Oregon farmland. Houses sit nestled in small groves of trees, separated by acres of crops. To the east are rows of berries; to the west, recently cut hay fields. The horizon is broken by small stands of old growth forest.

All of which, it appears, makes this prime habitat for the American kestrel, a once plentiful small falcon seen throughout the continent. The birds, Van Buskirk explains in a soft nature-documentary voice, are one of the smallest species of raptor, measuring about the size of a robin. A favorite of farmers, these “sparrowhawks” feed on mice and voles in the fields. But despite their popularity with human landowners, their numbers have been on the decline for several decades.

Except here, in the countryside just outside of Forest Grove.

Kestrel populations here are thriving. Bird pairs near the Pacific University campus are hatching as many as five young in a season, while in Sherwood, not 20 miles away, as the, well, kestrel flies, a good year means a brood of one or two young.

Van Buskirk and the two undergraduate research students working with him want to know why.

“What about this landscape is successful?” Van Buskirk asks. “When you work with endangered species, it’s hard to identify what’s missing, what’s caused the population collapse. If we can see what works here, we might explain the decline elsewhere.”

JUST MINUTES INTO THE DRIVE, Brown raises a pair of binoculars and announces a kestrel perched on a nearby powerline. Van Buskirk stops the car, and we stare for a few moments before Brown pulls a trap from the back.

It’s called a bal-chatri, a common means of catching falcons. But like all the equipment they use, Van Buskirk and his team have had to modify the design for the kestrels, which are much smaller than their hawk and eagle cousins. This one is a metal bicycle wheel with a cage fastened in the center. The outside of the cage is covered with fishing line nooses.

"When you work with endangered species, it's hard to identify what's missing, what's caused the population to collapse. If we can see what works here, we might explain the decline elsewhere."
– Richard Van Buskirk

Brown opens a small hatch and sets a mouse inside.

Van Buskirk creeps from the driver’s seat to lay the trap in some brush off the road.

We back up to give the bird some space, but she’s not shy. She immediately swoops down, intent on a mousy snack. On her fourth dive, she’s caught in one of the snares but quickly escapes. Surprisingly, she keeps trying.

“She’s more cautious than the first time, but she keeps coming back in,” Van Buskirk says. “These mice are just too much of a draw. They can’t resist.”

It takes a few more tries, a different trap, and a site several yards up the road, but it’s a lucky day. The waiting game has been short, and we have a bird within 30 minutes.

The team springs into action. The kestrel is gently removed from the trap, a blanket is spread on the roadside dirt berm, and the process of weighing, measuring and tagging begins. (The mouse is returned to its cage in the car, no worse for the experience.)

A falconer’s hood covers the bird’s eyes and a soft jacket wraps its wings. It seems docile, but when the hood slips, the bird almost bolts.

Van Buskirk catches it in his hands, “like a ninja!” Brown exclaims.

“We’re lucky this is a young bird,” the professor replies.

“An adult would have been gone. They just kind of wait for that moment when the person who has them isn’t quite paying attention.”

It takes 35 minutes for the team to finish their business, tagging the bird with a radio transmitter. That’s incredibly fast, Van Buskirk says, especially since the tagging process is still a matter of trial and error. Like the traps, the radio transmitters have had to be modified for the small birds. A falcon can only carry about 3 percent of its body weight unnoticed, meaning this 119-gram bird’s transmitter has to weigh about the same as a penny. The team has experimented with different transmitters and different ways to attach them, and today’s method involves a vest-shaped harness that fits over the wing joints and sets the transmitter on its back. Its battery will power the signal for three or four months, and the whole unit will shed when the bird molts over the winter.

THE KESTREL SPREADS HER TAIL FEATHERS for just a moment, showing off brown-red plumage, then she takes flight. Brown and Novero watch her through spotting scopes, then grab their telemetry gear — handheld antennae and radio transmitters — to try to pick up her signal.

Tagging the birds is exciting, but it’s only the beginning of the project. They will now spend hours tracking the birds’ activity, documenting the vegetation in various sectors of land, and mapping all of the data on computers back at Pacific.

The information will be added to Van Buskirk’s ongoing research, which will require years of data. This is his fourth year studying kestrels, with different undergraduate students each summer. The ongoing study is supported in part by a Murdock College Science Research Program grant from the M.J. Murdock Charitable Trust.

While Brown and Novero won’t be present for the final outcome of the long-term research, they stand to gain from the experience.

Both will develop their senior projects out of the summer of research. Brown has been looking specifically at kestrel nesting sites. Kestrels are cavity dwellers, often building their nests inside abandoned woodpecker holes. She has been examining nest sites in ash and oak groves to identify the conditions that seem to work best. Novero, meanwhile, is interested in the land characteristics that appear to contribute to nesting success and is running a toxicity study on addled eggs to see how the mother bird’s diet might impact breeding success.

Both said the fieldwork has given them insight for the future. Novero hopes to work outdoors, perhaps with Fish & Wildlife or the Forest Service, while Brown said she has always dreamed of becoming a primatologist. They’re hoping to continue conducting more research and getting field experience before exploring graduate school to pursue their scientific careers.

Kestrels, Van Buskirk said, give students solid wildlife tracking experience they might not have in relation to a study of bigger animals. Even in the falcon world, hawks and eagles are more dangerous and require more field experience before handling (an eagle’s beak can sever a human finger). High-profile projects, such as local work with extremely endangered condors, take years of experience.

“This is really great for students. They love the ability to work with animals directly,” he said. “Students can get out and learn wildlife tracking techniques. It gives them really good research experience that’s often hard to get in other settings.” ■