The Amazing Grace of Yukie Sumoge 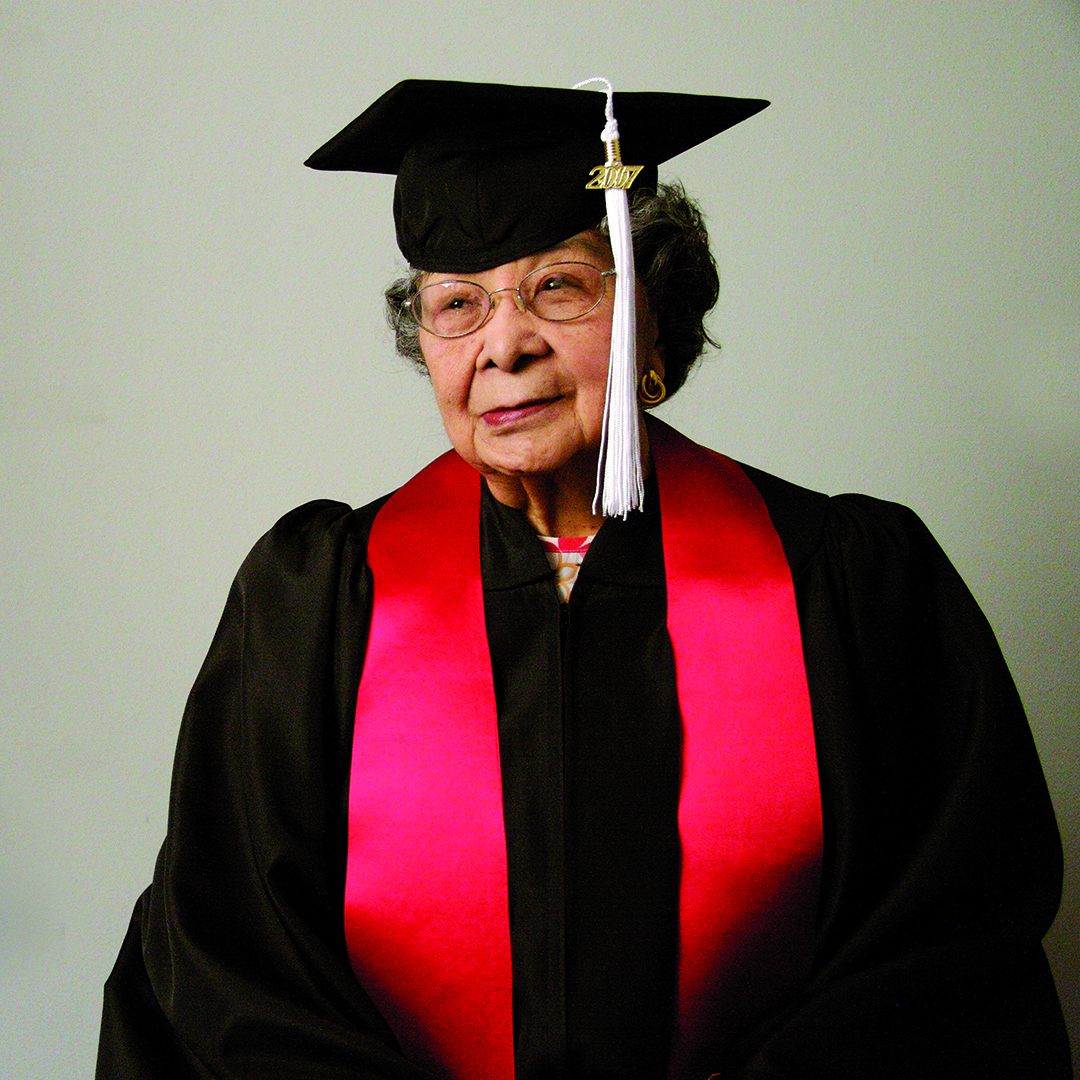 “Today we have the great privilege of honoring Yukie Katayama Sumoge.”

The voice of Willard Kniep, provost and vice president for academic affairs, rang out in the crowded university gymnasium, as he prepared to award the first degree at the May 19, 2007, undergraduate commencement ceremony to an 86-year-old woman who described the experience as “the highlight of my life.”

In her black robe, with a cane in one hand and a purple-and-white floral lei around her neck, Yukie Katayama Sumoge ’07 slowly made her way to the stage, assisted by student Clare Richardson-Barlow ’08.

“Born and raised in Hood River, Ore., Yukie entered Pacific as a freshman in September 1939.”

Sumoge grew up during the Great Depression, when nothing — not material goods and certainly not a college education — could be taken for granted. She worked hard in her parents’ fruit orchard in the small town of Parkdale, Ore., just south of Hood River. And she worked hard in the classroom, pursuing opportunities her parents never had.

“To me, and for my family, school was extremely important,” she said.

Her intelligence and character made a strong impression on Sylvia Lindley Bryan ’33, a teacher, and her husband, Irvin Bryan ’33, the principal at Parkdale High School. “Yukie was a very good student,” Sylvia Bryan, now 96, recalled, “You could see how much she wanted the education, and she was quite capable of succeeding. I always admired her because she kept a positive attitude about what she could do.”

Sumoge is modest, but when pressed she admits she graduated at the top of her high school class. Did she have a 4.0 GPA? A smile creeps into her voice: “Just about.”

In the first of two acts that changed Sumoge’s life, the Bryans contacted Pacific and helped their star pupil receive a full-tuition academic scholarship. A generation after her father emigrated from Japan to work the pineapple fields in Hawai’i, his only daughter took her first step toward a better life.

“According to our records, Yukie was a superior student, earning all A’s and B’s during her course of study.”

In retrospect, what stands out most about Sumoge’s freshman and sophomore years at Pacific is how ordinary they were. She lived in Herrick Hall and took a full course load, studying everything from English and Spanish to history and physical education.

A shy student who “concentrated very hard” on her studies, Sumoge also found time to be social, joining the Phi Lambda Omicron Sorority. Her classmates accepted her, and at the time she said she “never stopped to think” she was different. Only after she left campus would that difference — her Japanese ancestry — become an issue.

By the end of her sophomore year, she had settled into college life and had set her eyes on her future career. She decided to turn her interest in biology — “kind of my pet subject” — into a career as a lab technician. When she returned home that summer, she took a job packing fruit in a warehouse, a job she continued through the fall term.

Sumoge planned to begin her junior year at Pacific in the winter of 1942. But it would be 66 years before she returned to campus.

“World War II broke out. The world changed. And like so many Americans, Yukie’s pursuit of a college degree was interrupted.”

On her way to the stage where she would stand with faculty members and in front of 250 undergraduates, Sumoge heard Kniep’s voice break as he spoke those words. “I was touched,” she said.

The Japanese military bombed Pearl Harbor on Dec. 7, 1941. Soon after, a curfew was imposed on Japanese-Americans. Sumoge and her family weren’t allowed to travel, and continuing her education at Pacific was suddenly out of the question.

For months, the family lived in fear. “My parents heard the stories about the war atrocities. They heard such horror stories, and they thought we might be sent to a concentration-type camp. We had no idea what was ahead for us,” she said.

An only child, she tried to stay strong in front of her parents. “I felt pretty responsible for them,” she recalled. But was she scared? “Oh, I was. I was.”

Early in 1942, they learned their fate. President Franklin D. Roosevelt signed an executive order that led to the internment of about 120,000 people of Japanese descent — including more than 4,000 from Oregon. Sumoge and her family had just a few weeks to prepare for their forced removal.

They left in May, allowed to take only what they could carry. Trains with blacked-out windows carried them from Portland to California: first to a camp near Fresno and eventually to the Tule Lake Relocation Camp, 35 miles southeast of Klamath Falls, Ore.

Sumoge’s memories of the camps come in snapshots: sleeping in bunks in hastily constructed, tar-papered buildings. Hearing their neighbors through the thin walls. Her parents working in the mess hall. Overcrowding. No phone calls. No cameras. Few books. People standing in line, waiting to get into the mess hall, but falling down from the heat and their own exhaustion.

To make money and stay busy, Sumoge taught classes, earning $16 a month. Her voice thick with understatement, she said, “That wasn’t really my vision.” Her dream of becoming a lab technician seemed a world away.

She and her parents pledged loyalty to the U.S., which helped them earn a transfer in September 1943 from Tule Lake to another camp in Minidoka, Idaho, but they were still considered a risk to national security. It would be another two years — more than three years in all — before they were released.

In 1944, Sumoge left Minidoka briefly to marry Harold Okimoto, a member of the 442nd Infantry who was stationed in Mississippi. Months later, he was shipped out for combat duty, and she returned to camp, where the emotional struggle was even greater than before. Each day brought more letters from the War Department, notifying people in the camp about the death of family members who were serving the U.S. war effort.

“There they were in the service, risking their lives, and here we were, still detained,” she said. “It’s ironic, isn’t it?”

“After the war, Yukie returned to the Hood River area.”

Sumoge and her parents returned home in July 1945. They found their farm run down, their truck gone, their electrical appliances and other possessions stolen. On the bulletin board by the courthouse in Hood River, the names of Japanese servicemen were removed from the honor roll. Stores posted signs reading “No Japs Wanted.”

“I went to a restaurant,” Sumoge recalled. “You stand there and wait … and wait and wait … and other people come in and get served. Pretty soon you get the message and walk out.”

They could have moved back to Japan, but she said, “My parents didn’t want to go back. I think they felt like they came to this country and planted themselves here, and that’s where they wanted to stay.” So, they rebuilt, “starting from scratch, just about.” This wasn’t the time for dreams or a magical return to college and her earlier plans. “You get a little discouraged along the way, and you have to change your priorities,” she said. “That’s what happened to me.”

“Today it is our great honor to bestow upon Yukie Katayama Sumoge her Pacific University degree, Bachelor of Letters, honoris causa.”

For seven decades, Sylvia Bryan has maintained a friendship with Sumoge, the bright student she and her now-deceased husband helped to receive a scholarship to Pacific. When Bryan read a newspaper article about Oregon House Bill 2823, a bill that had yet to pass but would soon grant honorary degrees to former internees from Oregon who were forced to leave the state’s public colleges, she saw another way she could help her longtime friend.

In a handwritten letter to Pacific, Bryan provided Sumoge’s name and contact information so the university would remember to honor her friend when the bill passed. Though as a private school Pacific was not bound by the law, it did not wait to act. The letter was passed from Admissions to the President’s Office, and just six weeks later — and weeks before the bill passed — the university awarded Sumoge her honorary degree.

Sumoge’s hand shook as she touched the lectern on her way across the stage. Okimoto lost his battle to cancer at the age of 41, but her second husband, three daughters, granddaughter and other family members were in the audience, wiping away what Sumoge called “joyous tears.”

Her granddaughter, Julie Whitecotton, who noted the family now has three generations of women with college degrees, said, “I don’t think I’ve cried that much in one day, ever. I don’t know what could ever top feeling that proud of someone.”

In 1990, Sumoge received a reparation payment of $20,000 from the U.S. government, but she said, “It certainly did not make up for what we lost. I don’t think you can put a value on what happened to us and what was taken away.”

But this, an honorary degree from the college where she had pursued her dreams, a degree the university awarded her before any law said it had to be done — this, for her, was gratifying. She said, “There’s no way I can express my gratitude and appreciation and pride that Pacific has honored me. I have no words to explain it. It was certainly the fulfillment of a dream.”

After the ceremony, she called Sylvia Bryan, who was unable to attend the ceremony. Remembering her high school principal, Bryan’s husband, Sumoge told her friend, “Mr. Bryan would be so proud.”

Sumoge’s story aired on a local television station, and she joked she is “finding out I have a lot more friends than I ever realized.” At dinner recently in Hood River — at a restaurant that decades earlier might have refused to serve her — a stranger approached.

“She asked me if I was the lady who received the diploma,” Sumoge said. “And I told her I was.”

This story was originally published in the Spring 2007 issue of Pacific magazine. Yukie Katayama Sumoge died in 2011 at age 91. Another student of Japanese decent — Lillian Hirasawa Kurahara — also was bestowed an honorary degree in 2007. She was unable to attend the commencement ceremony but told her story to Pacific magazine in 2019. Two other Pacific students of Japanese decent from early World War II were identified from research by library archives Student Assistant Elias Gilman ’09. One, Madeline Yamane, received her bachelor’s degree in 1941 before the war broke out and apparently was not interned. She lived in Portland and died in 2004. The other student, Saka Yoneyama Noma, was identified in university records. She was incarcerated during the war in the Minidoka Relocation Center in Idaho. Her whereabouts were unknown in 2007.