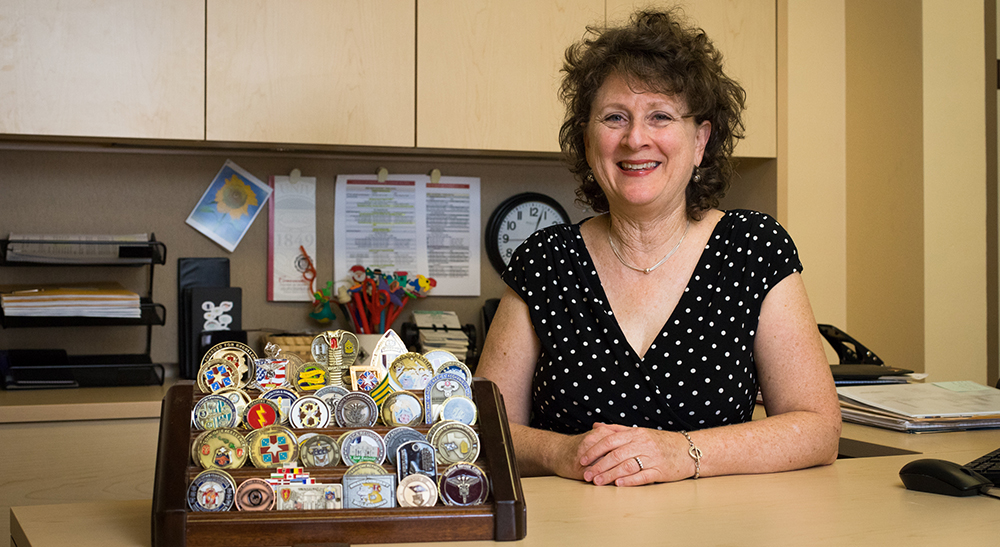 Now Rymer, recently retired from the U.S. Army, where she was the first woman optometrist to achieve the rank of full Colonel, has returned to Pacific’s Forest Grove Campus as associate dean of clinical programs in the College of Optometry. She replaces Professor Emeritus Carole Timpone, who recently retired.

“The timing was perfect; the opportunity was perfect,” Rymer said from her second-floor office in Jefferson Hall. “The stars lined up.”

Rymer oversees Pacific’s EyeClinics in Forest Grove, Cornelius, Hillsboro, Beaverton and Portland, as well as scores of optometric students’ internships and externships. It’s similar to some of what she did in the Army, where she managed optometric clinics at Fort Bragg and other bases.

Her most recent Army tour of duty, though, was with the Army Institute of Surgical Research in San Antonio, where she led the Army’s efforts to improve the way it treats and prevents ocular trauma and vision damage incurred on the battlefield.  A presentation she moderated last year at The Association for Research in Vision and Ophthalmology annual meeting,  “Military Relevant Priorities and Strategies for Injury Diagnostics and Treatments,” stressed the importance of treating eye injuries close to the point of injury, often meaning the forward edge of the battlefield.

That role put her in contact with civilian and Defense Department partners in ocular research, such as biotech companies, NGOs, other federal services, and academic institutions that study new treatments for reducing the visual consequences of eye injuries. That experience already is paying dividends for Pacific, as Rymer says she has invited a former colleague in the Defense Department’s Congressionally Directed Medical Research Program’s Vision Portfolio to speak on campus.

Rymer and her husband Scott and daughter Quinn have settled back in Portland, their first stop after an Army career that moved them to Colorado, Pennsylvania, South Korea, Oklahoma, Texas, Hawai’i, North Carolina and back again to Texas. Rymer said the decision to come back to the Northwest was relatively easy. As her military retirement neared, Pacific came calling.

“I had always stayed in touch with Pacific,” she said. “I really appreciated the educational mission and curriculum, the dedication to the students, and the team culture that was there.” She praised the scope of Pacific’s academics and the quality of its faculty and, she said, “I’ve always looked forward to returning to the Great Northwest someday.”

At Pacific, her desk has an adornment that is familiar in the military; less so in academia. It’s a rack full of challenge coins collected during the course of her career, glittering mementos of a professional journey that included many firsts.

“I had a very fortunate career,” Rymer said.

And it’s not over by a long shot. Rymer said she looks forward to maintaining Pacific’s clinical excellence, and says she hopes and expects to be a mentor to students — especially those attending Pacific on military scholarships, just as she did 30 years ago.

The College of Optometry is celebrating 75 years of focusing on pupils by recognizing the contribution of its programs, faculty and alumni in the Fall 2020 issue of Pacific Magazine. For more stories, visit pacificu.edu/magazine. 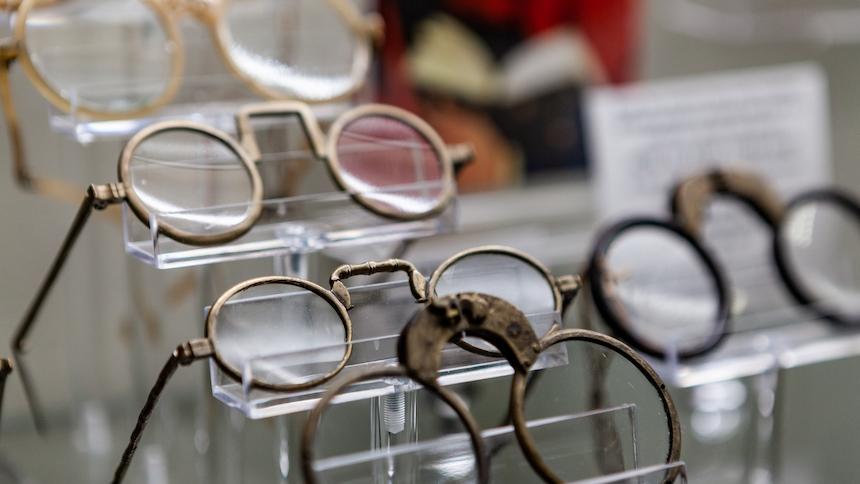 Celebrating the 75th Anniversary of the College of Optometry

From 1945 to today, Pacific University's College of Optometry is celebrating 75 years of focusing on pupils. In honor of this important milestone, discover how optometry came to Pacific and other eye-opening stories recognizing the contributions of its programs, faculty and alumni.