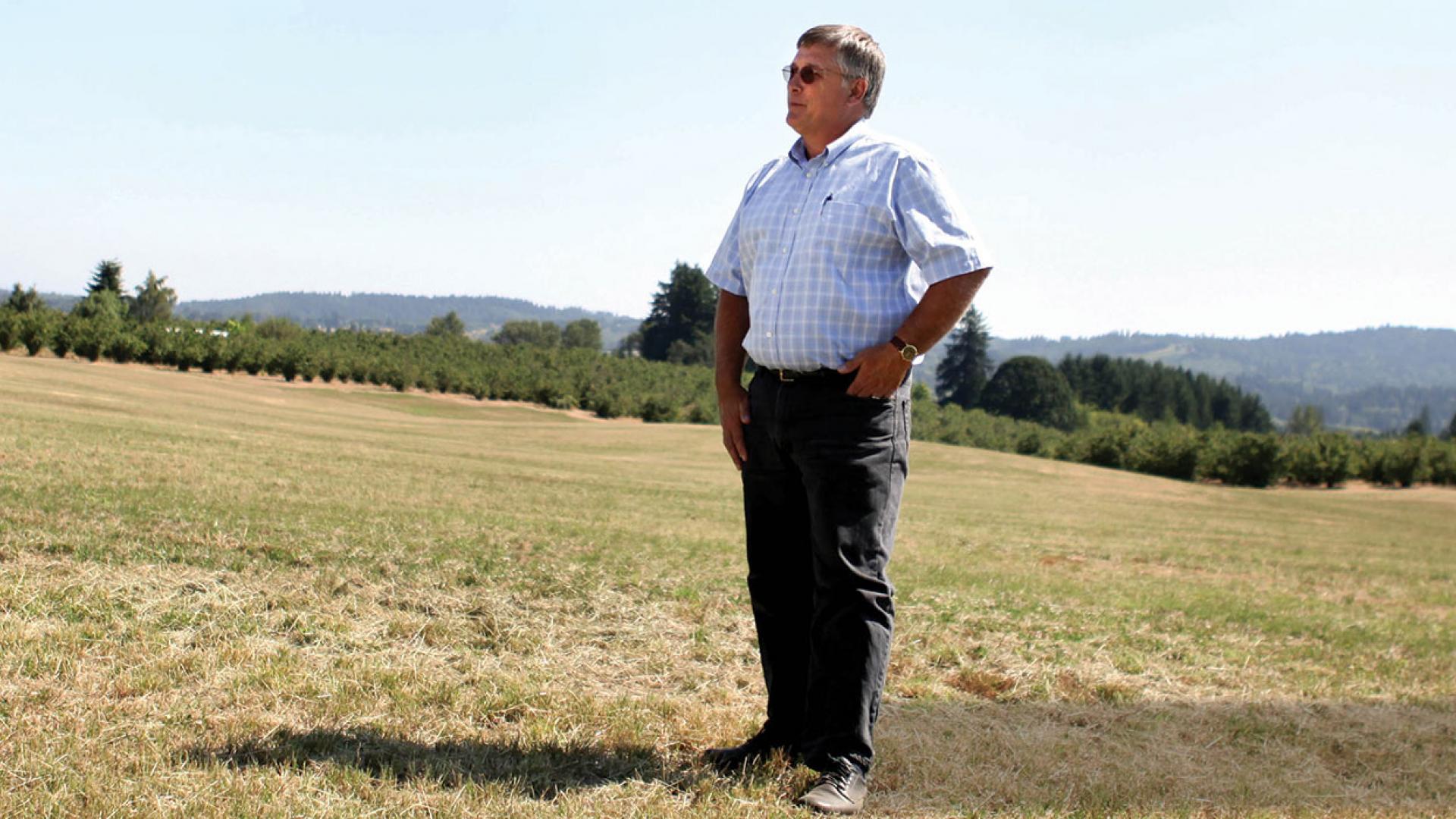 Though English by birth, Fletcher was moved. He joined Lee’s crusade and set out with the Oregon Dragoons, a group of 19 men determined for “Oregon or the grave.” Ultimately, he became one of only nine members of the group to reach Oregon (motto notwithstanding, the others just turned back). He took a donation land claim in Yamhill County, near what is now Dayton, and started his family farm.

He later signed at Champoeg to create the Provisional Government of Oregon (and, okay, became one of the founding trustees of Willamette University).

“We haven’t gone far since, and we’ve been involved in agriculture ever since,” said Fletcher’s great-and-then-some-grandson, Mike Wilhoit ‘77. Though Fletcher’s home still stands in Dayton, the clan has since moved to Newberg, where Wilhoit’s grandfather began growing hazelnuts in an orchard that Wilhoit maintains today.

In his professional life, Wilhoit has been deeply involved in a wealth of agriculture activities in the state, with Evergreen Agricultural Enterprises and more recently with Wilco, a cooperative that operates farm stores and agronomy sites throughout Oregon.

At home, though, his heart still belongs to the family farm, where he spends his evenings and weekends keeping up the orchard—and tradition—72 years in the making.

Even as the population grows, urban areas expand and the state attempts to diversify its economy, agriculture remains one of the top industries in Oregon, yielding some $4.4 billion in 2010 alone, according to the Oregon Department of Agriculture. It’s big business, but it’s also family business: The vast majority of Oregon farms are individual-owned and less than 200 acres in area.

It’s not an easy livelihood in a changing world, but Wilhoit believes now is an ideal time to be a grower in Oregon.

“Farming, it’s what’s keeping America afloat right now,” he said. “It’s a good industry for a young person to be into.”

Oregon is the No. 1 U.S. producer of 14 different crops and the country’s sole provider of blackberries, boysen and youngberries, hazelnuts, loganberries and black raspberries. The state stocks plant nurseries and Christmas tree lots across the country, and Oregon wine and beer have made its mark on the nation’s palette. A growing interest, particularly locally, in organic and close-to-home food is creating niche markets for Oregon farmers, and expanding international markets are raising prices that make farming a viable lifestyle for many.

"About 600-some Oregon growers supply almost all of the hazelnuts for the United States."

Hazelnuts, for example, were a hard life in the 1980s and early 1990s. Eastern blight, a parasitic disease that kills the trees, hit Oregon’s orchards hard. At the same time, land prices were high, and several orchards turned into subdivisions.

“In this area, there was a lot of years of doom and gloom,” said Wilhoit, whose own trees have suffered the blight.

About 10 years ago, though, the Oregon State University hazelnut breeding program developed new tree varieties that had a disease-resistant gene. The new trees can replace the dying ones, producing after four or five years.

“There is a resurgence in the Oregon hazelnut business,” Wilhoit said. (He’s replanting his own orchard about 10 acres a year with the new variety.)

About 600-some Oregon growers supply almost all of the hazelnuts for the United States, and recently China has started buying about half of the crop, too, increasing demand, and therefore price.

“Hazelnuts are really good right now,” Wilhoit said. “In the last 10 years, prices have been outstanding.”

International markets also are feeding Oregon wheat-growers’ market demand. Wheat is the No. 4 ranked commodity in Oregon, worth almost a half-billion dollars in 2010.

“There are emerging economies with a new middle class, and they don’t want to eat grain anymore, they want to eat meat,” Wilhoit said. “So they need more grain to feed more animals. Long term, it’s going to be a good market for growers.”

And Oregon’s moist climate is a good place to grow wheat in particular, he said.

In his position with Wilco, Wilhoit has been active in building relationships with wheat growers, who traditionally have transported their harvests via truck. Wilco has railway access at its agronomy sites, though, and that link is allowing farmers to get their crop to distribution out of Portland faster—taking it from farm, to train, to ship, where a large portion is sent to emerging markets in China.

Wilhoit’s work has taken him all over the world, exploring both markets for agricultural crops and also different techniques of farming. Much of his travels have been related to hazelnuts.

He also had the rare opportunity to travel to North Korea. Portland-based relief nonprofit Mercy Corps gathered 10,000 apple trees to send to North Korea, and Evergreen Agriculture (a branch of Evergreen Aviation) donated a jet to transport the trees. Wilhoit visited after the trees had been planted.

It was a surreal experience, he said, recalling bags inspected on the way into the country and minders monitoring his every move. Still, he said, “when you get farmers talking to farmers, all the political crap goes away.”

And that, alone, is probably what is most meaningful to Wilhoit about farming.

"It's not an easy livelihood in a changing world, but Wilhoit believes now is an ideal time to be a grower in Oregon."

“It’s a lifestyle choice,” he said. “Sometimes it’s not an economic bonanza or a gold mine. I wouldn’t give up the lifestyle.”

Wilhoit remembers when the hazelnut orchard was less automated, when the harvest was raked by hand.

“My grandmother would gather all of her friends together and they’d rake the whole orchard together by hand,” he said. “It was a social thing.”

He also remembers telling his grandmother of his desire to farm. He had attended Pacific because it was close enough to home to help on the farm and because Coach Chuck Bafaro recruited him to play baseball. He was studying history but realized his ambition was in agriculture.

“She had grown up in the Depression and seen family lose farms. She said, ‘No, you don’t want to do that. You went to college for something better.’ I said, ‘No, I do.’

“I think my grandmother would be proud of what I’ve done with agriculture,” he said. “It’s been a long journey, but eventually you get to the right end.” ■