Guide to the Trees 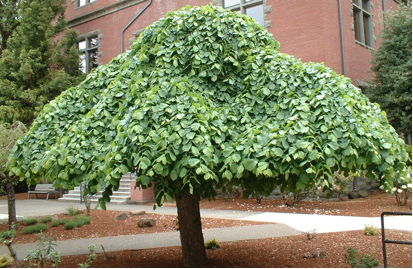 Native to Japan, this ornamental hybrid is planted all over the United States and naturalized in DC and Ohio. The Weeping Higan Cherry is also planted in Portland's Japanese Garden. You may view it by standing on the west deck of the pavilion. It is between the Iyostone (a grey stone about 3' wide by 5' tall) and the flat garden.

It grows up to 25' both in height and girth; easily recognizable for its umbrella-shaped branching.

It produces light pink blooms one week out of the year between late March and early April. Shiny, black fruit do appear, but they are usually shielded by the leaves and are inconspicuously small.

In Japan, the Sakura, or cherry tree, is an idealized plant, because its blossom causes people to reflect on the briefness of human life. Hanami, or Cherry-Blossom viewing, has been celebrated by the peoples of Japan since the Edo Period (1603-1867). They go out with their friends, family, and coworkers to enjoy the blossoms and are commonly found picnicking nearby. The makings of the National Cherry Blossom festival, celebrated yearly in DC, began in 1906. Dr. David Fairchild was a member of the USDA and tested the durability of 100 cherry trees he had imported from Japan in his yard at Chevy Chase, Maryland. He discovered they faired well, so on the last Friday of April 1908, he gave saplings to boys attending schools in DC to plant at the homes of their families in celebration of Arbor Day. Dr. Fairchild suggested that the trees be used to decorate the speedway there. In 1910, when Japanese chemist, Dr. Jokichi Takamine, heard of this he asked whether the First Lady, Mrs. Helen Herron Taft, would accept a donation of 2000 extra trees that he would fund in the name of the City of Tokyo as a gift of friendship to the US. As is common with these disease- and infestation-prone trees, they arrived in poor condition and the trees were burnt. However, on February 14, 1912, 3020 trees (again funded by Dr. Takamine) arrived in good condition. The National Cherry Blossom festival is celebrated yearly in DC as a result of this generous gift. On December 11, 1941, four cherry trees were chopped down. Although the reason was never officially discovered, people suspected it was to retaliate for the bombing of Pearl Harbor. Resultantly, the "Japanese Cherry Trees" became "Oriental Cherry Trees" for their protection.