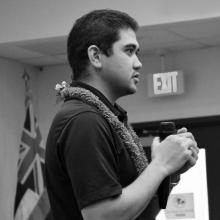 Course Information
At Pacific University, all faculty teach a variety of different courses. Typically, we do not use graduate teaching assistants, which means that your classes will be taught by professors and that you will have plenty of opportunities to get to know the faculty in your discipline. Below I have listed some of the courses that I teach. We are always developing and trying out new classes, so the list may change now and then. You can descriptions of the courses listed below on the website.

PhD in Sociology, University of Hawai‘i at Manoa, Honolulu, HI in 2011.

Master of Arts in Sociology, University of Hawai‘i at Manoa, Honolulu, HI in 2009.

Bachelor of Arts in Sociology, Pacific University, Forest Grove, OR in 2003.

My research is situated in the study of race, ethnic identity, and racial and ethnic relations.  Employing critical race theory and grounded theory methodologies my research examines Filipino ethnic identity development in Hawai‘i.  Many individuals in Hawai‘i grow up being ashamed or embarrassed about their Filipino heritage.  My research focuses on how this sense of shame is shaped by the social structures of Hawai‘i and how individuals eventually assert a Filipino identity in this context.  While this is the main focus of my research I have also done work on racial and ethnic relations on college campuses, the construction of masculinity, and innovative teaching methods that engage students in the classroom.

Eisen, Daniel B., Arlie Tagayuna, and Kara Takasaki. 2012. “What Does it Mean to be Filipino?: Choosing a Side and Developing a Filipino Identity.” Filipino American Historical Society Annual Conference, Albuquerque, New Mexico.

Eisen, Daniel B. 2012. “Being Filipino: Experiences with Microaggressions and the Presence of a Colonial Mentality.” Hawaii Sociological Association Annual Meeting, Honolulu, Hawaii.

Eisen, Daniel B., Kara Takasaki, and Arlie Tagayuna. 2015. “Am I Really Filipino?: The Unintended Consequences of Filipino Language and Culture Courses in Hawaii.” Journal Committed to Social Change on Race and Ethnicity 1(2): 25-53.

Eisen, Daniel B. April 2015. “The Noble Fighter and the Shadows of Empire.”

The following have been published in the Fil-Am Courier, a Filipino-American Newspaper in Honolulu, Hawai‘i:

Daniel Eisen recently published in the Journal Committed to Social Change on Race and Ethnicity.

The Forest Grove Leader chronicles a First Year Seminar class's effort to shed light on some of the university's unsung heroes.