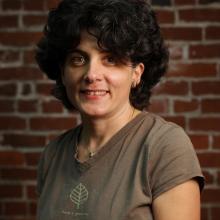 PhD in Microbiology, University of California Riverside, Riverside, Calif., in 2008

Bachelor of Science in Biology and Chemistry, Eötvös Loránd University, Budapest, Hungary in 1995

Antibiotic production and resistance among bacteria in natural environments

Antibiotics are natural antimicrobial compounds, produced by a wide range of microorganisms (fungi and bacteria). Their discovery and ensuing therapeutic use has led to increased life expectancy and to the notion that infectious bacterial diseases are easy to treat. But our casual attitude toward bacterial diseases is about to change, as infections by antibiotic resistant bacteria are getting more frequent.

Many soil bacteria produce antibiotics (as secondary metabolites) although the function they play in nature is still unclear. Antibiotics might help the bacterium to compete with others, but cell-cell signaling is another plausible explanation. The majority of the antibiotics we use today and the microorganisms producing them were isolated in the “golden age of antibiotic discovery” from 1942 till the early 1970’s. There are two main hurdles to antibiotic research today: 1) pharmaceutical companies are not interested as sales from antibiotics do not generate as much money as from medications treating chronic conditions (e.g. heart disease, diabetes), and 2) 99.9 % of soil microbes do not grow in the laboratory, therefore the easiest discoveries have been already made. But these difficulties do not eliminate the need for new antibiotics!

Antibiotic resistance among clinically relevant pathogens is a major problem and a public health threat. Emergence of antibiotic resistance is the result of mutations and horizontal gene transfer among bacteria driven by selective pressure, presented primarily by the antibiotics used in therapeutic settings and animal husbandry. Numerous studies have documented the growing presence of resistant bacteria in hospitals, schools and in facilities for the elderly. On the other hand, fewer studies have investigated the presence of resistant bacteria in natural environments: soil, sediment, fresh and marine water. Natural environments are the main source of antibiotics, therefore also where antibiotic resistance primarily evolved. As most antibiotics are natural products of soil bacteria, it is not surprising that many soil bacteria harbor genes encoding for enzymes providing resistance against antibiotics. Many soil bacteria carry multiple resistance genes. Therefore natural environments provide a source and reservoir for antibiotic resistance. Investigating the presence of such genes in environmental samples and isolating and cultivating the bacteria carrying those genes present an interesting, challenging and useful research project for undergraduate students. This would be of particular interest to students who plan to pursue a career in health care.

My research combines many subdisciplines of microbiology: microbial physiology, environmental microbiology, medical microbiology; as well as provides possibilities for collaborations with other departments. I use classic culturing techniques and the most advanced molecular and computer based genomic tools.

Collaborative research between undergraduate students and faculty will be showcased in the Multipurpose Room on the lower level of the University Center.

Following a national search, Dr. Jo Isgrigg has been named the inaugural Director of the Office of Scholarship and Sponsored Projects at Pacific University.

Small Signs of a Big Impact