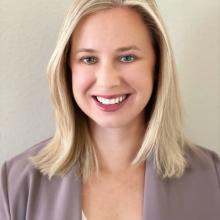 Dr. Jill Speece is an Assistant Professor of Industrial and Manufacturing Engineering at California Polytechnic State University in San Luis Obispo.  She is also currently an adjunct professor in Healthcare Administration at Pacific University and a continuous improvement consultant with Ridgerunner Engineering.  Prior to her academic career, Dr. Speece worked in the manufacturing industry as an Industrial Engineer at Raytheon (2004 – 2009), Abound Solar (2009 – 2012), and Terumo BCT (2013 – 2014).  She received her Lean Six Sigma Expert certification through Raytheon in 2008.  She then transitioned to working in the healthcare industry and served as both a Process Improvement Consultant and the Director of Business Optimization at Radiology Associates from 2015 – 2021.  Dr. Speece has her BS in Industrial Engineering from Cal Poly, SLO, an MS in Engineering Management from USC, and a PhD in Systems Engineering from Colorado State.