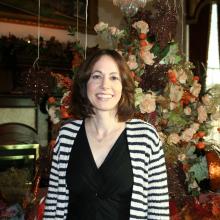 I am an intellectual historian whose work analyzes cultural politics and political culture in modern America and the transatlantic world. My current book project "THINK or Die": A Prize to Ezra Pound, Fascism, and the Fate of Democracy traces ideas about economics, nationalism, and fairness that gave rise to right-wing groups in America and Italy from the 1920s until today.

"The Gospel of Beauty in the Progressive Era: Reforming American Verse and Values," Palgrave Macmillan, April 2011.

"The Intellectual History of Conservatism and the Debate Over Ideas in America," Workshop on New Frontiers/New Currents at Indiana University/Purdue University Arts and Humanities Institute and American Studies Program, July 20-21, 2016

"The Conservative Road Not Taken: The Politics and Poetry of Peter Viereck," Columbia University, March 2009

Moderator, Humanities Institute Conference,"The Other Side of Reason: The History of Madness Today," SUNY Buffalo, October 2008

2011 | Junior Faculty Award for Excellence in Teaching and Scholarship