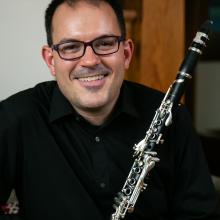 Louis frequently performs with the Oregon Symphony and has performed with the Vancouver (BC) Symphony, Astoria Music Festival, Britt Festival Orchestra, Kansas City Symphony, Boston Symphony Orchestra, Omaha Symphony and other orchestras around the country. Louis was a member of the New World Symphony for three seasons and he was a member of the Chicago Civic Orchestra for one season. In addition, he performed for four seasons as the 2nd/Eb clarinetist of the Eugene Symphony in Oregon and one year as the 2nd clarinetist of Orchestra Iowa in Cedar Rapids. In the past, Louis was a fellow with the Tanglewood Music Center and he was also a member of the New Fromm Players, a contemporary music ensemble in residence at Tanglewood. Other festivals include Spoleto USA (Charleston) and the AIMS Orchestra in Graz, Austria.

Louis studied at the New England Conservatory with Craig Nordstrom where he received his Bachelor of Music in performance. He received his Master of Music from Rice University where he studied with Michael Webster. He also studied with Lawrie Bloom at Northwestern University. Louis traveled to Auckland, New Zealand where he performed as the guest principal clarinetist with the Auckland Philharmonia, and was subsequently offered the full-time position as the principal clarinetist there. Louis currently splits his time between Honolulu and Portland, Oregon.