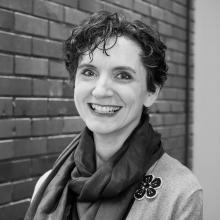 Topics in Moral Philosophy (a 400-level course focused on one topic, e.g., it was focused on Sympathy and Empathy in 2012)

Dr. Ilea has done over 60 conference presentations. Here are a few:

There is a common conception that philosophy is interesting and deep, but it does not make much of a difference in the real world. This is in part because in the 20th century, philosophers in the Anglo-American, or analytic, tradition aspired to the objectivity of the sciences; and this aspiration led philosophers to think that they needed to be neutral on controversial social/political issues. My work fits within a growing movement to reverse this trend. I argue that it is possible for philosophical work to contribute to public debates and social issues in ways that do not undermine our roles as philosophers. Through systematic and rigorous thinking about our distinctive roles, skills, and knowledge, philosophers will be better able to make valuable contributions to important social issues. Philosophers' engagement in the world, collaboration with others, and the motivation to search more deeply for new and innovative ideas will enrich and further issues of public concern.

Interim Director of the Center for a Sustainable Society, January 2017 - July 2017

I like to make crafts out of recycled materials. For example I made a dress and jewelry made out of 27 containers of Purely Decadent ice cream (the best ice cream ever)! It was an outfit I wore on Halloween and it was part of Junk to Funk, a fashion show of outfits made from recycled materials. Right now, I'm into making things with little bits of fabric and modifying clothes (real clothes, not ice cream container ones!). I'm also into crocheting with plarn (yarn made from torn/useless plastic bags), making rugs, purses, etc. Plarn is an awesome material to work with (google it if you want to know more). I also make wallets from soy milk and juice containers as well as beads/jewelry from all kinds of scrap paper and other "trash." Unlike other kinds of activism I do, this is not a social justice project. It's just relaxing!