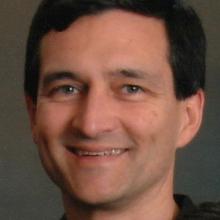 Dr. Steve Rhine comes to Pacific University after serving as Professor of Education at Willamette University for 19 years. He received his doctorate from UCLA in Administration, Curriculum and Teaching Studies. Before entering teacher education he taught high school mathematics and was a counselor in Los Angeles, California.

Steve has been awarded numerous federal and other grants focusing on mathematics education and uses of educational technology that total approximately $4 million. He directed the Oregon Technology in Education Network (OTEN), from 2001-04 that was then funded by a grant from the Preparing Tomorrow’s Teachers to Use Technology (PT3) program. He was also instrumental in a Teacher Quality Enhancement Partnership grant and recently served as Principal Investigator of a four year Fund for the Improvement of Post-Secondary Education (FIPSE) grant that made use of research on algebraic thinking to help prepare pre-service teachers with understanding of how students struggle as well as technological tools to help develop understanding of challenging topics in algebra.  That grant helped establish the Center for Algebraic Thinking (algebraicthinking.org) of which he serves as director.

He has presented at multiple conferences around the world and has published three books. The first, "A Brilliant Teacher", an engaging account of his year-long trip around the world with his wife and three children. The second, he co-wrote with Mark Bailey, "Integrated Technologies, Innovative Learning: Insights from the PT3 Program", an edited book of stories of efforts by institutions to integrate technology in the development of preservice teachers. The third is a book of activities for teachers implementing iPad apps from the Center for Algebraic Thinking. His fourth book, “How Students Think When Doing Algebra,” was published by Information Age Publishing in 2018.

Rhine, S. & Abraham-Rhine, T. (2004). A Brilliant Teacher: Lessons Learned from One Family’s Journey Around the World. Salem, OR: Sawtooth Press.

Rhine, S., Harrington, R., & Olsewski, B. (2015). The role of technology and research in increasing preservice teachers’ anticipation of students’ thinking in algebra. Contemporary Issues in Technology and Teacher Education, 15(2).

Harrington, R. & Rhine, S. (2019). Can We Meet the Standards for Mathematical Practices with Web-Based Curricula? The Oregon Mathematics Teacher, May/June.

Rhine, S. (2012). Power to the educators: The decentralization of textbook publishing.  Interface: The Journal of Education, Community, and Values, 12(10).

Rhine, S. (2009). A technological solution to the algebra dilemma? (Feature article) Interface: The Journal of Education, Community, and Values. 9(6).

Bailey, M. and Rhine, S. (2008). Sharing notes in our classroom. Learning and Leading with Technology, Dec/Jan.

Rhine, S. (2017). Preparing Teachers of Mathematics for the Realities of Technology in the Classroom.  Association of Mathematics Teacher Educators (AMTE) Conference, Orlando, FL