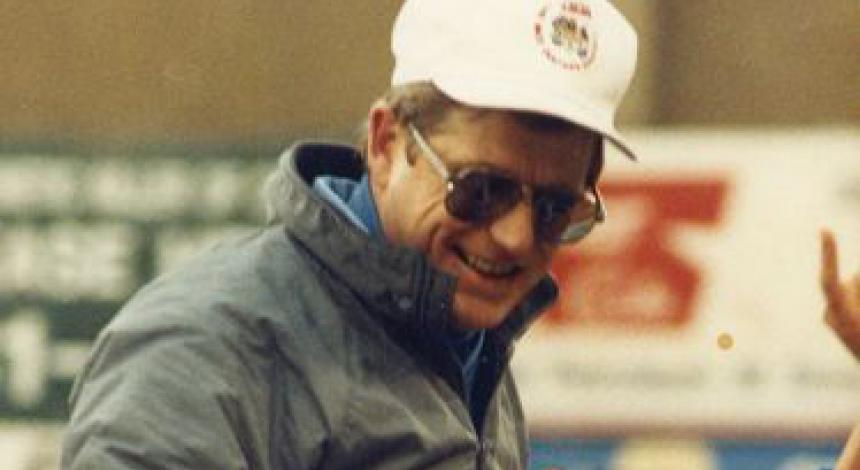 Love was just one of the lessons McQuary learned while playing football at Pacific University, a lesson that translated to a 47-year career teaching and coaching around Oregon. In October 2013, McQuary published 100 Yards of Memories: Memorable Players and People of an Old Coach to recount his experiences as a player and coach.

McQuary attended and played football at Forest Grove High School before enlisting in the military and being assigned to the National Guard. His high school sweetheart, Peggy, now his wife of almost 53 years, was still in their hometown, so he chose to attend Pacific University to be nearby. Of course, the school’s football team was also a draw.

“I wanted to be a teacher and a coach from a very young age,” he said. “I had some very good coaches from Pacific, and I think they instilled in me some values that I carried on in coaching over my career — values like how to treat kids.

“I think the best memories are the guys that I played with, many who are still very close friends.”

He laughed. “[But] none that I want to repeat.”

“I was an avid reader and was just fascinated with history, especially American history,” he said. “I’m rather patriotic.”

He married while still in college and skipped his senior year on the gridiron, working instead. When he graduated with a degree in history and became a high school history teacher, though, he went back to football as a coach.

Those memories he was more willing to recount.

“I have this old saying, 'It's not the size of the dog in the fight, it's the size of the fight in the dog,'” McQuary said. “It always comes down to heart. You see a glint in a kid's eyes.”

Kevin Herinckx, a student at Banks High School, for example: “He was 5'7” and 133 pounds, skinny little kid. And he was the unanimous choice for all-state defensive player. He was just a phenomenal competitor.”

Herinckx is just one of the players McQuary reminisces about in his book, self-published with help from Outskirts Press. He decided against traditional publishing routes because he wanted to retain the rights to his stories and control over their distribution.

“I have nothing but good things to say about [Outskirts].”

In fact, McQuary plans on working with them again when Volume II is finished.

But back to Pacific.

McQuary couldn't speak fast enough about his delight in the Pacific football program being reinstated in 2010.

“A number of us that played together at Pacific have gone out to a number of the games. One of the most memorable experiences has to be this year's Linfield game. My granddaughter's boyfriend plays for Linfield, and both of my children graduated from Linfield, and my son played on two national championship teams at Linfield.”

McQuary remembers it as a phenomenal game. Linfield had gone undefeated all season, beating their competition by an average of more than 48 points per game. Pacific lost, but only by a tight 6 points after a close match.

“Of course, my kids and grandkids that were with me were rooting for Linfield, so I had to keep my mouth closed.”

McQuary has been very happy with the recent progress of Pacific football. In fact, offensive line coach Ian Falconer is one of McQuary’s high school players.

“I hate to get him into trouble, but I always got onto him about his feet. If you look at him for his size, he has the smallest feet in America. I told him, 'You gotta work on that. Foot speed, foot speed, foot speed,'” McQuary said. “He not only became a very gifted football player, but was also a scholar athlete, which to me is a big thing.”

A scholar athlete is chosen based not only on athletic performance, but on academic achievement as well. In his graduating year, Falconer was one of two players in the state to be awarded the honor, and his old coach couldn't be prouder.

The values McQuary learned through football have translated throughout life, he said.

“You gotta work hard. You play by the rules. Hard work pays off. And particularly teamwork. I'm just a real believer in team.”

He remembers a team from Sherwood High School from earlier this year, where he has been substitute teaching for fourteen years. They'd lost a state championship right before a three-day weekend but spent the rest of their days off repainting their school's “skills center” for students with severe physical and mental disabilities.

“You play by the rules and you're a good citizen ... that, to me, is what exemplifies the best aspects of the sport.”

“I just really want people to know that my book comes from the heart, from 47 years of working with kids, and there's also mention in there of people that really impacted me ... and it was just my way of saying thank you.”

100 Yards of Memories: Memorable Players and People of an Old Coach is available from Amazon.com, Barnes and Noble, or as an e-book from publisher Outskirts Press.