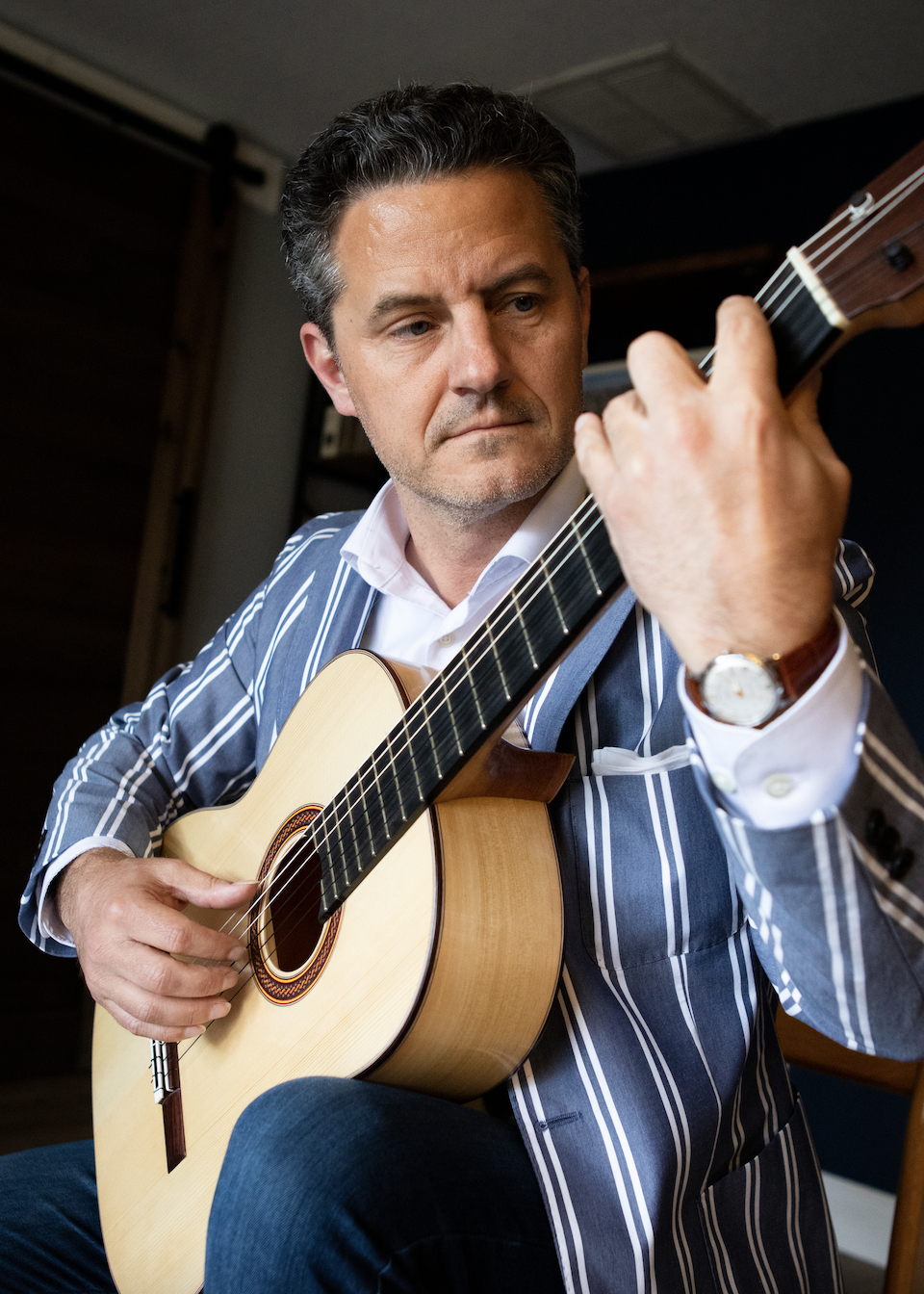 Derek Brown ’98, MAT ‘99, freshly returned from his second, monthlong course with a master luthier in Spain, is talking about why making a guitar appeals so strongly to him.

“Guitar building is this beautiful mix of art and science,” he said. “You have design elements, and then a set of steps, procedures you go through to bring it to life. It’s cathartic; it’s a wonderful thing.”

Blending art and science describes the life and career of Brown, an accomplished player of classical and flamenco guitar, holds a doctorate in educational leadership, an Air Force veteran, a youth music teacher, an education policy maker and a school administrator.

Pacific University is honoring Brown with the university’s Outstanding Alumni Award, which will be presented at a ceremony during Homecoming, Sept. 30-Oct. 2.

“Derek is truly an outstanding graduate of Pacific’s music program,” said Michael Burch-Pesses, longtime professor of music and director of bands, who nominated Brown. Burch-Pesses said Brown “richly deserves” the prestigious award, which is granted to alumni who distinguish themselves in life and in their professions.

Ask Brown who is responsible for his success in his distinctive career, and he offers a long and diverse list. Teachers at Wallowa (Ore.) High School. A school superintendent. Luthiers. Music professors. Fellow musicians. They’re all people who know him from various chapters of his life and who have mentored or encouraged him along the way.

“It's tough to identify one when so many have helped along the way,” he said in an email, with a winking emoji. “I’m incredibly lucky to have had those people all along the way. All the way back to 8, 9 years old, all the way up to now.”

Start here, with Dale Story, an Oregon legend who is perhaps best known for winning a national cross-country championship for Oregon State University while running barefoot in a Michigan winter. A dedicated outdoorsman, Story taught biology and coached cross-country and track at Wallowa while Brown was a student.

“I’d do anything for DJ,” said Story, who called Brown “a dandy.” Brown was calm, easygoing, warm, sensitive and curious, he said.

Those qualities, perhaps especially the curiosity, are what drove Brown through his remarkably non-linear career. Other people certainly have switched fields and used different skill sets, but it’s a rare person who surpasses expectations in so many of them.

His first major career change occurred in 2002, when he reassessed music’s place in his professional life. He had received two degrees in music from Pacific and taught the subject to students in the small towns of Gilchrist and Scappoose, Ore., but began to wonder if he wanted to spend the next 30 years or so doing the same thing. He had a passion for classical guitar, but he thought he might serve it better if his day-to-day job wasn’t focused on music.

He started to think about whether the military might provide a useful pathway.

“Leadership was a powerful idea to me,” he said. He also talked over his options with Professor Burch-Pesses, who had been a bandmaster in the Navy before coming to Pacific.

His service record glitters with commendations. “Unmatched leadership.” “Guided unusual ops with ease.” “Head and shoulders above contemporaries.” “No job is too big for this CGO.” (CGO stands for Company Grade Officer, and Brown was twice selected as CGO of the Year.)

He said he loved the way professional airmen and airwomen responded to urgent tasks, whether welcoming ambassadors, providing dignified passage for human remains from wars, or scrambling to deliver critical equipment used in emergencies, such as the time he had to manage delivery of a deepwater drone that was used to rescue seven stranded Russian sailors.

When the military chapter ended, Brown shifted gears again, this time into the arena of education policy. First he became a researcher at the Educational Policy Improvement Center in Eugene, Ore., then moved to the Oregon Department of Education in Salem, where he was employed for more than six years and ultimately became the assistant superintendent of assessment and accountability. At the Education Department, he helped Oregon and a coalition of other states develop and apply statewide educational assessments, which were used to measure ways in which public schools were meeting, or failing to meet, their educational goals.

While at ODE, Brown went back to school. He worked part-time as a graduate student at George Fox University, where he earned his doctorate in educational leadership with a 4.0 grade-point average. His doctoral dissertation, College Readiness: An Examination of the Relationship Between High School Diploma Requirements in Mathematics and College Remediation Rates, was judged a piece of “cutting-edge” research that led his faculty to present him with an award for outstanding dissertation in educational leadership.

Brown acknowledged that his career trajectory didn’t appear to be a straight line, but said his work as an Air Force office mapped to his post-military career in education policy, in that he helped direct policy, run large organizations and direct broad projects. At the same time, he and his family, which by then included a daughter, could settle again in their home state of Oregon.

The jobs in the Air Force and then in education policy also allowed him to keep his musical focus at the center of his passion for the guitar. He has taught guitar to students for the last 18 years, and has played on his own and with others for even longer. And over the last decade or so, he said, he has been “more intentional” about the way he attends to music. That’s one reason he has now completed two residencies building guitars in Spain with master luthiers. 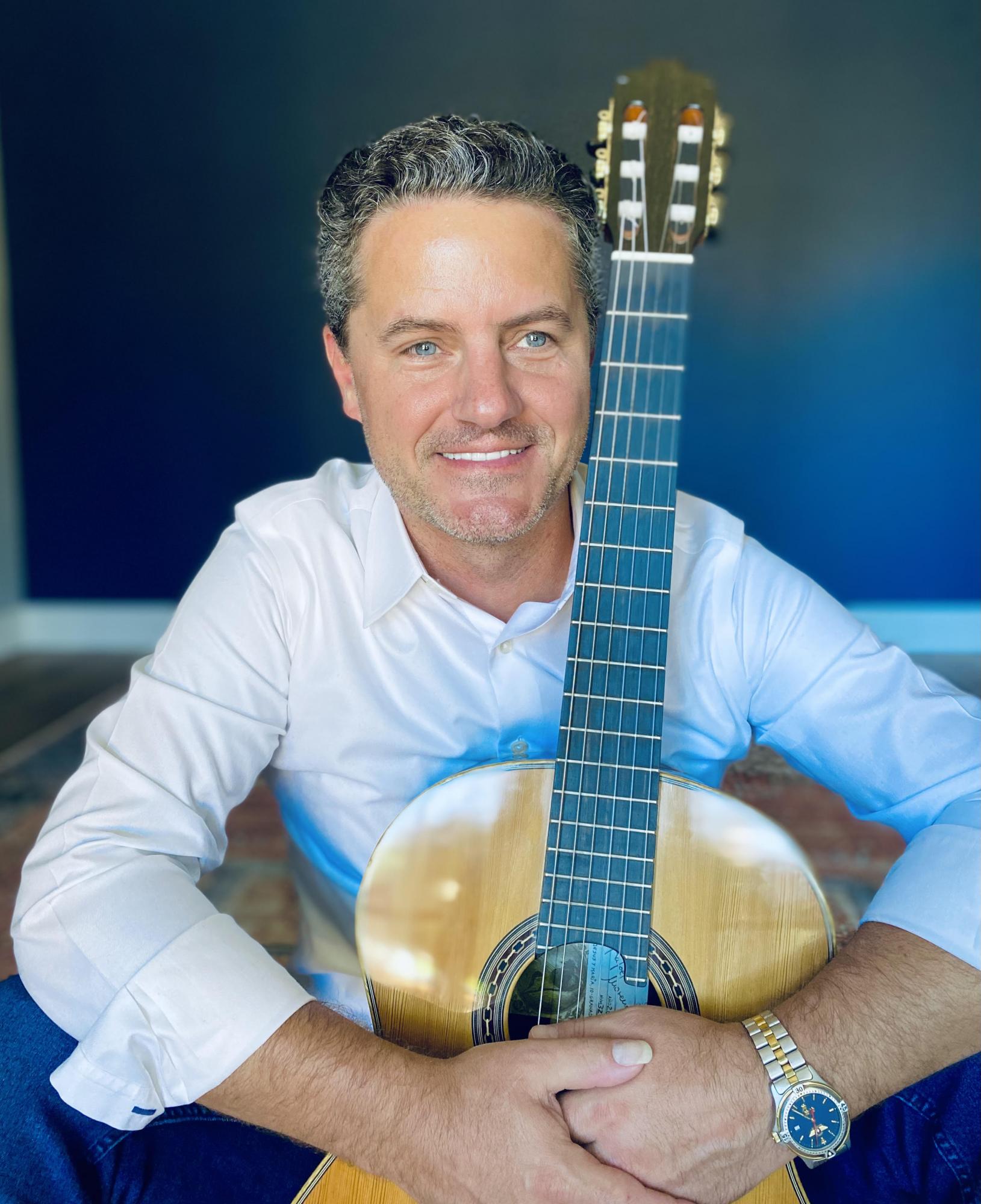 “Derek is one of the most talented, effective and efficient learners I've ever worked with during my many years of teaching guitar,” said Kit Garoutte, an accomplished guitar musician who both gave lessons to Brown and since has performed with him.

After working at the state Department of Education, and a brief stint at another education research center in Portland, Brown returned to the local district level. He served more than four years in the Newberg (Ore.) School District, where he was assistant superintendent and director of teaching and learning. When that district was roiled by change, he shifted to the David Douglas School District in Portland, where he has taken on a role that is part familiar and part new: He is the director of district technology and assessment.

What would Brown say about his own career, and why it merits such distinction from Pacific?

And now that he’s older, with a wife, Carol Pfeiffer-Brown ‘97, a 15-year-old daughter and a 13-year-old son, “I now appreciate what balance means more than I did as a younger person,” he said. “I know how important my family is.”

Dale Story, who is now in his 80s and living in John Day, Ore., has made Brown the backup executor of his will. He says it’s impossible not to like and want good things for Brown.