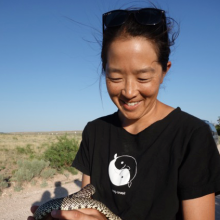 In a paper published Wednesday in PLOS ONE, a scientific journal, Pacific University biology professor Lauren Chan describes the ways an animal’s habitat affects its biology.

The research, which was led by Chan and features seven other authors, examines the Sceloporus Arenicolus, familiarly known as the Dunes Sagebrush Lizard, a threatened species that occurs only in very specifically suitable sandy habitats in southwestern Texas and New Mexico.

“The main message is that this new information shows where populations of the lizard occur and how they are related,” Chan said. “Our results are important for resolving the controversies about the distinctiveness of the lizard and its dependence on the shinnery oak dunes.”

Chan, whose research focuses on the evolution and conservation of biodiversity, says she has “a particular fondness for amphibians and reptiles.” 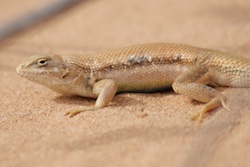 The Dunes Sagebrush Lizard study involved capturing the lizard and extracting tissue or tail and toe tips to conduct DNA sequences that would reveal the animal’s lineage. It revealed the way different populations of the lizard evolved to suit their environment.

The results “show a clear genetic break between the Southern Mescalero Sands and Monahans Sandhills populations,” the study reports, describing the evolution of subgroups of the lizard. The two populations have “independent and distinct histories that are associated with the timing of sand deposition and dune formation in these sub-regions.” The study found further genetic distinctions among these subgroups.

The research showed that human incursions that have fragmented and degraded the specialized landscape have limited connections among the lizard populations and led to the extinction of local populations.

“Continued fragmentation of the shinnery oak-sand dune ecosystem increases the likelihood that ancestral diversity and unique evolutionary lineages will be lost,” the paper concludes.