Both Sides Together: Pacific University’s Production of Veils Explores Friendship and Faith 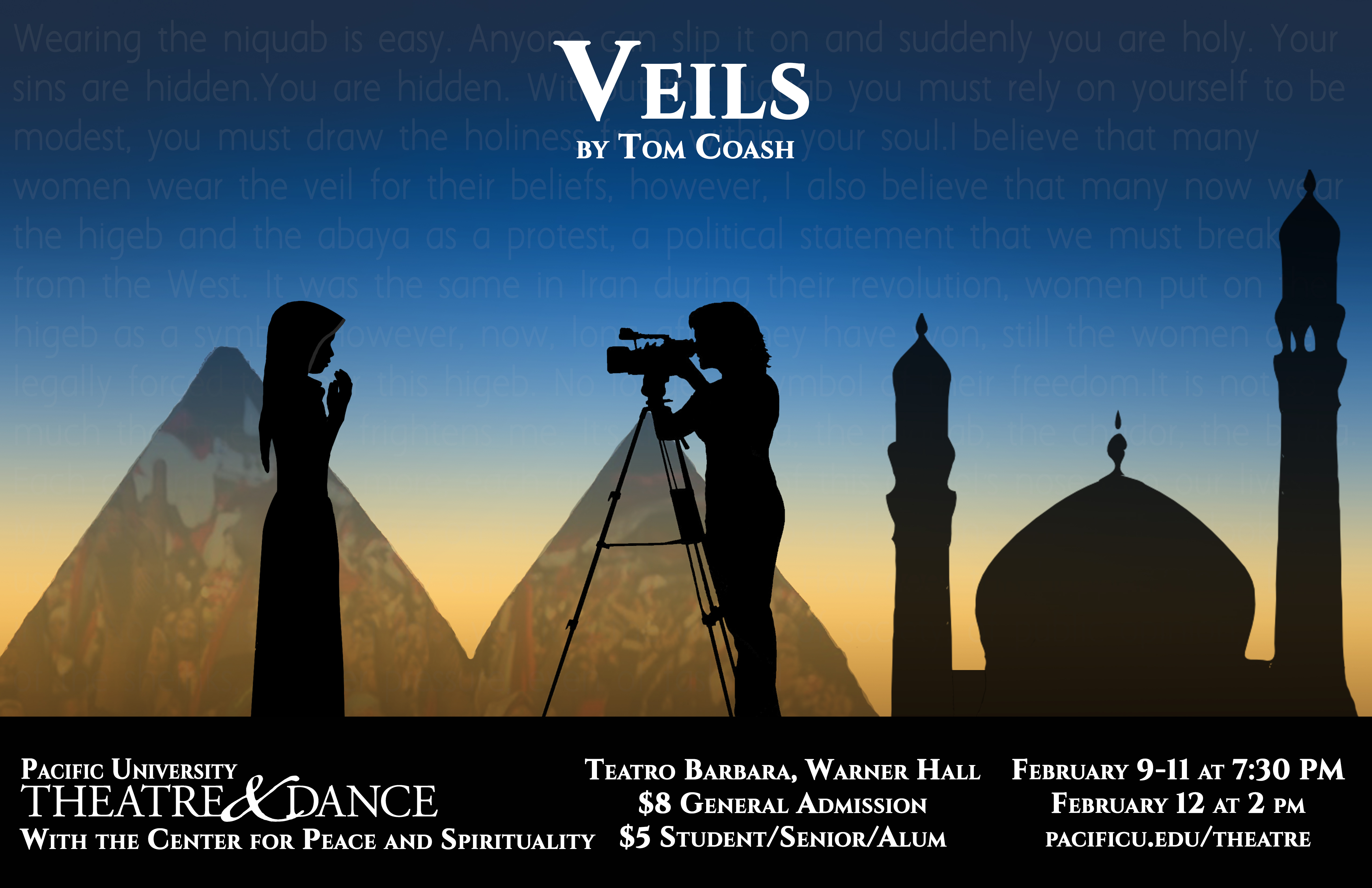 This winter in Pacific University’s studio theatre, the friendship between two Muslim students, one American and one Egyptian, will unfold against the backdrop of the beginnings of the Arab spring. Veils by Tom Coash, is the winner of the 2015 American Theatre Critics Association's M. Elizabeth Osborn Award, a finalist for the 2015 Steinberg/ATCA Award, winner of the 2013 Clauder Competition, and a recipient of an Edgerton Foundation New American Play Award. Director Debbie Lamedman is excited to bring this topical and timely piece to life in partnership with the Muslim Student Association and the Center for Peace and Spirituality.

Set in the lead up to the Arab Spring and Egyptian revolution of 2010, the play centers on two female Muslim students, Intisar and Samar, studying at the American Egyptian University in Cairo. Intisar has travelled from Philadelphia to study Arabic and Islam, while Samar, the native Egyptian, is getting a Masters in video journalism. The two become fast friends through a shared love of music and shared faith. The point of friction is their differing beliefs on veiling. In endeavoring to explore the pro and con arguments for veiling, the two become entangled in the developing political uprising. Without prescribing which way is right or wrong, Coash allows each woman to argue her beliefs in thoughtful, articulate language.

“Even though the play addresses some big ideas and social issues, there is an intimacy to the dialogue and relationships that lets the audience feel up-close and personal with the two young women we see onstage,” says Theatre & Dance department chair Ellen Margolis.

“I got completely swept up in the friendship of these two women, all the while being vividly reminded of the cultural differences between them. I was fully invested emotionally and intellectually in the characters,” says director Debbie Lamedman. “Each of the women in the play has her own distinct personality, and they are both so passionate about their individual beliefs. The actresses, Gabie and Mariam, embody these characters so beautifully. I couldn't have dreamed of a better cast! The actresses are as feisty, passionate, strong and outspoken as their counterparts on stage and they work wonderfully together.”

The show will have four performances in the Teatro Barbara, Warner Hall, at Pacific University’s Forest Grove Campus, running Thursday through Saturday, February 9-11, at 7:30 p.m.; and Sunday, February 12, at 2 p.m. For tickets and information, please call the Pacific University Box Office at 503-352-2918 or visit tinyurl.com/pacutickets.