Building History From the Ground Up With 'The Identity Project' 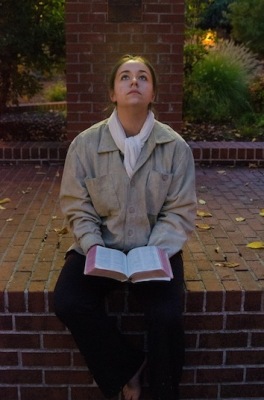 Throughout her life, award-winning director and choreographer Jessica Wallenfels has asked questions about culture and belonging.

Devised theatre pieces like this one — built from the ground up through rehearsals and cooperative effort — are “hard, no matter what your experience level," Wallenfels says. "We are literally making it up as we go along."

But the journey is rewarding.

The Anxious Seat: Pacific Identity Project draws on the University’s rich past and on the experiences of real students today. The show explores questions of ethnic and cultural identity, subjects Wallenfels initially felt intimidated to take on.

While The Anxious Seat is far from her first devised theatre piece, she questioned her own authority when it came to this topic, especially since she has no previous ties with Pacific.

Yet Wallenfels has come to realize that “foreigners [see] what community members are blind to.” And as Wallenfels’ perspective has informed this intimate look at Pacific’s heart, she herself has lost some of the “tunnel vision” with which she first approached the project.

“I went to an art school," she said. "It's eye opening to be with students whose eyes are wide to looking at their choices with a more holistic perspective."

Research into Pacific’s early years is a big part of the process.

“The history is a little dark and daunting, once you really dig your claws into it and discover the shadows of the past,” says Shannon Carlson ‘15, who plays Abigail Duniway and Mary Frances Farnham.

Alluding to the often-tragic interactions between settlers and native people, she adds, “It’s changed the way I see Pacific.”

Meanwhile, Carlson and her fellow cast members have less than seven weeks from casting to curtain in which to shape these shadows into art.

During rehearsals, Wallenfels leads group workshops, improvisations, and exercises, all centered on the play’s core questions of identity and becoming.

“It’s challenging,” says Heather Nichelle-Peres ‘14, who plays Pacific’s founder Tabitha Brown. “I have to be really open to what we’re doing.”

Without even a script to follow, creation is “more about the process,” as each actor interprets his or her own character.

Nichelle-Peres used research and imagination to write her own Tabitha Brown monologue. Then, following one of Wallenfels’ suggestions, she presented a three-minute wordless piece incorporating travel, stillness, music and epiphany.

“It’s very abstract,” she says. “But this is actually a great process for me artistically. I get into my head too much, I get very literal. This helps me be freer as an artist.”

Cast members must be willing to bring very personal issues to the stage, including ones that cause anxiety and discomfort.

“For me, it’s mostly about racial identity,” Nichelle-Peres says. “I’ve dealt with these issues a long time ago, but it’s going to be hard being raw and open in front of an audience—not as a character, but as myself.”

The play’s title (The Anxious Seat) highlights this potential for discomfort.

Referencing a historic church custom in which someone in need of special guidance — a new convert, for example — sat in a reserved corner in the very first pew, Wallenfels said the title “speaks to someone on the brink of revelation, who [takes] a place where the force of their community will blow open their doors of perception.”

The Anxious Seat: Pacific Identity Project deals with issues that cause anxiety in many of us, problems and questions that are easier to deal with if we never allow ourselves to perceive their implications head-on.

While taking in these storylines, Carlson's hope is that the audience will better understand some of the social challenges previous generations have faced.  “Ideally, people will come see the show and leave feeling a little more connected to the foundations of Pacific,” she said.

Fellow students and other audience members will be “engaged and very emotionally connected to what we produce," expects Nichelle-Peres. "I think they’ll be really surprised about how edgy and compelling it’s going to be.”

General admission is $7, with discounts available for Pacific students, faculty/staff and senior citizens 65 and greater. Tickets may be purchased in advance by calling 503-352-2918.