Career Counselor Follows Her Own Advice 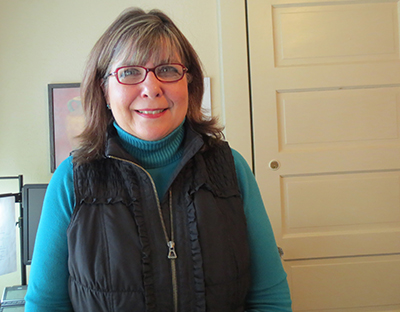 Now associate director of the Career Development Center, Dressler came to the university in 1992 as a temporary program assistant with University Relations and then with the President’s Office.

In the meantime, Dressler has worked full time for the Career Development Center, serving as the program coordinator from 1993 to 2000, then working as assistant director beginning in 2002. She has been an associate director since 2005. Her job involves a variety of activities, including managing major career events, teaching career courses, advising students and alumni, and supervising the university’s work study program.

From the beginning of her first job at Pacific, “I realized I really wanted to work with the students,” Dressler said.

Among those who influenced her decision to get into career counseling was Ellen Hastay, former head of the Center for Civic Engagement.

“I blame her for my addiction to higher education,” Dressler said with a laugh.

She said Hastay “was a real influence on me, as a role model for counseling and as an encourager … . She said, ‘You are capable, you’re already doing career counseling. Just go back and get your master’s.’”

In earning her master’s degree, Dressler completed a practicum internship at the Washington County Jail for a year while still working full time at Pacific.

“Because time was so precious, I needed to find a site where I wouldn’t get cancellations … and inmates don’t cancel on you,” she said. “And, they’re actually anxious to get out of their cells.

“I learned a great deal from a lot of these young women and young men,” she added.

Dressler taught a class on parenting skills to the inmates, as well as parenting classes for parents on probation.

“It’s such a reminder of the importance of education,” she said. “Those people who have more education, more career skills, the less likely they are to offend. That connection is a big one.”

Now in her final two years of earning a PhD, Dressler is researching “career resiliency and how to foster learning and skills that assist young adults to enter, excel at, and exit the world of work with dignity.”

Career resiliency, she said, is a relatively new area of study. Her interest in it “grew out of my experience working with alumni who either were fired or quit or were miserable in their job because of conflict in the workplace,” she said. “Sometimes it’s a pattern where they just don’t have that skill set to manage conflict in a positive way.”

Among those who influenced Dressler’s studies were the late Eva Krebs, former dean of students at Pacific University, as well as university attorney Monica Marvin and CDC Director Brian O’Driscoll.

Students, though, motivate her most.

“My favorite part is really when students are able to say, ‘Oh, I had no idea there was so much information out there.’”