Each year, alumni celebrate milestones by gathering with their classmates at Homecoming. Among the top milestones is induction into the Golden Guard. This honored society recognizes alumni who have reached the 50th anniversary of their time at Pacific. At their 50th reunion, alumni receive medallions and sign their name in the sidewalk outside Old College Hall, leaving an indelible mark on Pacific University.

The History of the Old Guard

In 1965, a proposal was made to create a special group in honor of those alumni who had graduated more than 50 years ago.

Though many names were suggested — Mid-Century Club, Boxer Brigade, Golden Circle, even Fiftieth-Year Club — the one that stuck was Old Guard.

The purpose of the Old Guard was to provide “special recognition of the senior alumni of pacific University; to insure that all alumni classes, no matter how large or small, have a ‘home’ when they return for reunions; to provide a vehicle for communication and contact among the senior alumni.”

On April 18, 1966, a letter was sent to alumni announcing the establishment of the Old Guard. Membership in this group was granted to all graduates and former students of Pacific University whose classes graduated 50 or more years ago, including alumni of Tualatin Academy.

The first gathering of the Old Guard took place during Commencement on May 15, 1966. The Class of 1916 was inducted into the Old Guard by alumnus Arthur Prideaux, Class of 1906, who was the oldest alumnus present.

Fifty-year alumni have been inducted into the Old Guard every year since 1966. 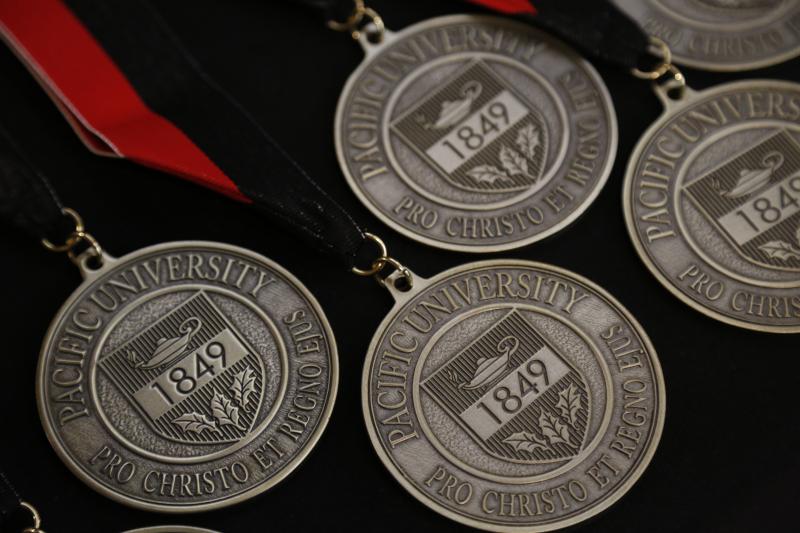 During Homecoming Weekend 1993, the Class of 1943 and other members of the Old Guard were invited to sign their names in wet concrete outside Old College Hall to signify a place the alumni could call home.

Once the cement dried, the alumni would become a lasting piece of Pacific University’s Forest Grove Campus and History.

The long-standing tradition has continued, even after Old College Hall was moved in 2003. The building, the original home of Pacific University, was set on wheels and rolled around the block to a new location on College Way. The signed sidewalk squares were moved, too.

Each year, a square of sidewalk is removed, re-poured, and signed by the newest inductees into the Guard.

From Old to Golden

In Spring 1987, alumnus Ted Stook ’37 — his class on the verge of their induction into the Guard — wrote a letter to the university magazine, then called Pacific Today. On behalf of his class, he argued that the term “Old Guard” was no longer applicable as his generation continued to live active and vital lives. “We do not believe we are ‘old,’” he said. “Therefore, so that this honored group may have a more practical and realistic title, we respectfully suggest a change in name to ‘Golden Guard.’”

It was another 10 years before the suggestion took root.

During Homecoming Weekend 1997, the Class of 1947 was officially inducted into the Golden Guard — as each class has been ever since.