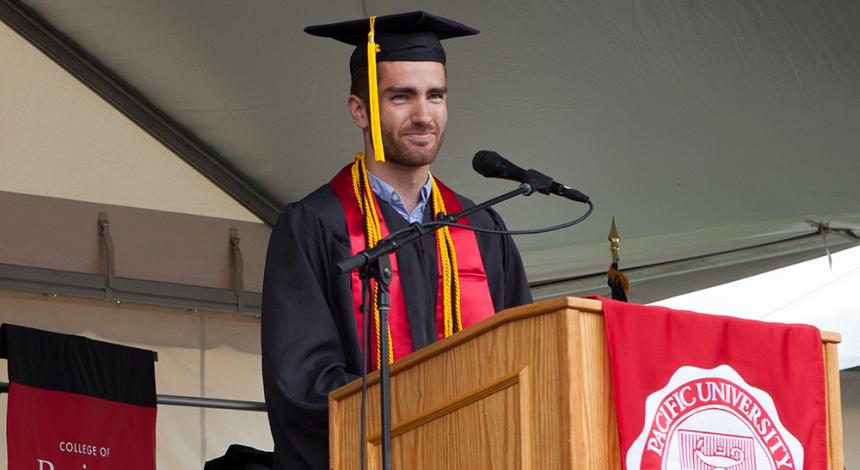 Earlier this year, he received a Fulbright Award to work with the Neurobiology of Alcoholism team at the University of Erlangen in Germany.

Gegenhuber's 10-month Fulbright trip to Germany later this year will be a return to the University of Erlangen, where he completed an internship in medical science as an undergraduate student at Pacific.

While at Pacific, Gegenhuber also ​served as a teaching assistant for general biology lab courses, volunteered in the pathology and emergency departments at Tuality Community Hospital, completed a cancer biology internship within Pacific's School of Pharmacy, and a space biology internship at the NASA Ames Research Center in California.

Gegenhuber is a two-time recipient a NASA Oregon Space Grant Consortium 4-year Institution Scholarship, and a two-time honorable mention recipient of the Barry M. Goldwater Scholarship award for demonstrating an interest in pursuing a research career in molecular biology.

He received the university's General Chemistry Achievement Award in 2013, the Amy M. Young Award in Creative Writing in 2014, and the Eva C. Krebs Boxer Spirit Award for academic merit and community involvement in 2015.

An eight-time Dean's List honoree, Gegenhuber has also been a member of the university's Phi Eta Sigma Honorary Society since 2013. Following his Fulbright trip, Gegenhuber plans to pursue a doctorate in immunology and a career in research and teaching.