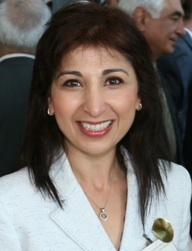 Pacific University's College of Optometry has received a bequest from the estate of late alumna Kamelia Massih (OD '85) to create a permanent endowment that will fund the Kamelia Massih Prize for a Distinguished Optometrist.

The annual prize will be the principal honor recognizing an alumnus who has made a significant impact on the profession.

The first award will be announced at the University's commencement ceremony on Saturday, May 21.

"Pacific University will benefit immensely from the generosity of Kamelia Massih and her extended family," President Lesley Hallick said.

"Through this gift, Dr. Massih's family carries forth her legacy of excellence in serving patients and others in need. Kamelia made a positive difference in the lives of so many, and will continue to do so indefinitely through this endowment. On behalf of the entire University community, we are most grateful."

Beloved by her family, friends and patients, Dr. Massih passed away in March 2010 following a three-year battle with cancer. Her journey as a foreign-born immigrant is one of inspiration.

Born and raised in Iran, she came to the United States in 1978 to pursue a degree in biology. After graduating from Oregon State University in 1981, Massih completed her doctorate of optometry from Pacific in 1985. She opened her own practice, Beaverton Vision World, in 1989, and later opened a second location in Portland.

Massih cared deeply about others, giving countless hours of time and financial resources to a wide range of local and national charities. She was a loving wife and mother who enjoyed the fine arts, including music and dance, as well as traveling and the outdoors.

"Kamelia had a keen affinity for Pacific University," her brother Fariborz Maseeh said. "Our family hopes this gift will recognize excellence of Optometry graduates of Pacific University and will inspire other alumni to carry on Kamelia's passion for serving our community and those in need.  She loved Pacific and its commitment to civic engagement, something she believed wholeheartedly in."