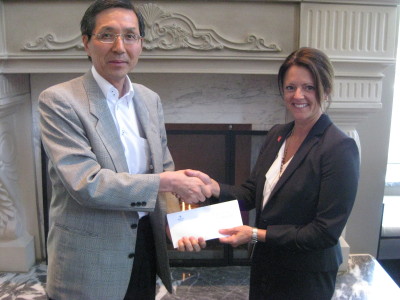 Pacific University alumnus Dr. Shinji Seki OD ’79 will receive the eighth annual Kamelia Massih Prize for a Distinguished Optometrist on May 19 at the university’s graduate and professional Commencement ceremony.

Seki attended the Pacific University College of Optometry, graduating in 1979, before completing a residency in contact lenses and binocular vision at ICO. Today, he is a visiting professor of optometry at Tianjin Vocational Institute in Tianjin, China, following his retirement as president of Kikuchi College of Optometry in Nagoya, Japan. He also is the head of Seki Optometry Consulting, which provides optometry education services in the Asia-Pacific region.

He continues to serve as a board member of the All Japan Optician and Optometry Association, a key organization working for optometric legislation in Japan.

The Kamelia Massih Prize for a Distinguished Optometrist honors a Pacific University College of Optometry alumnus who has made a significant impact on the profession. It was established by the family of Kamelia Massih, who was born and raised in Iran before coming to the United States to pursue her education. She completed her doctor of optometry degree at Pacific in 1985 and opened her own practice, Beaverton Vision World, in 1989, followed by a second location in Portland. She died in March 2010 following a three-year battle with cancer.

Massih cared deeply about others, giving countless hours of time and financial resources to a wide range of local and national charities.

“Kamelia had a keen affinity for Pacific University,” said her brother, Fariborz Maseeh. “Our family hopes this gift will recognize excellence of optometry graduates of Pacific University and will inspire other alumni to carry on Kamelia’s passion for serving our community and those in need.”

Dr. Seki becomes the eighth recipient of the prize on May 19. Previous recipients include:

Dr. Seki will receive the award at Pacific’s graduate and professional Commencement ceremony, which begins at 1:30 p.m. Saturday, May 19, at Hanson Stadium in Forest Grove. He also will deliver the keynote address for that ceremony, where the university will confer master’s and doctoral degrees on about 400 students.

Earlier in the day, during Pacific’s undergraduate Commencement ceremony, Pacific will recognize about 350 bachelor’s degree candidates form the colleges of Arts & Sciences, Business and Education. The university also will award an honorary doctor of humane letters degree to trustee and longtime Pacific supporter Tommy Thayer, best known as the guitarist for the legendary rock band KISS. Thayer will deliver the morning ceremony keynote address.

Pacific University is a comprehensive university serving almost 4,000 students a year with undergraduate, graduate and professional programs in the arts and sciences, business, education, health professions and optometry.