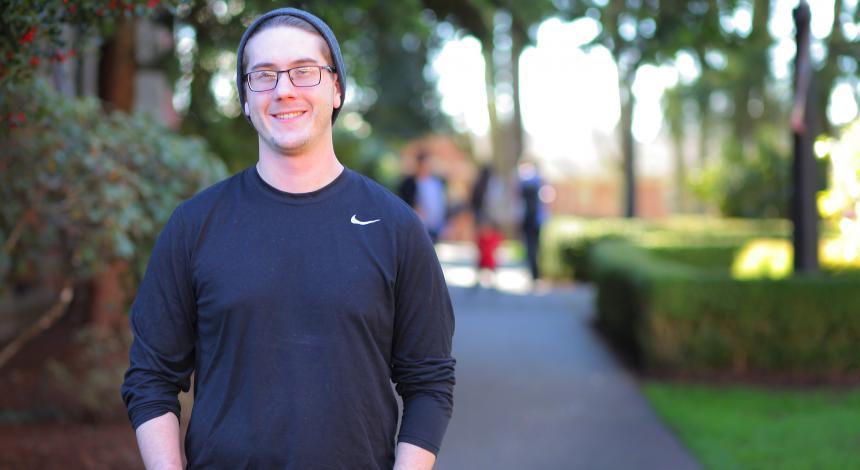 Cameron Davis ’13 had the grades and he had the test scores.

But he wasn’t accepted to medical school on his first try.

It’s what happened next, he said, that proves how well Pacific University prepares its students for the next stages of their lives.

Now a medical student at Oregon Health & Sciences University in Portland, Davis said Pacific gave him not only the academic rigor, but also the experience and long-term support, to find success.

It was soccer that first brought Davis to Pacific, but he already had some interest in a pre-med route when he started classes.

“I knew I wanted to do something science-y,” he said. “I thought it would be cool to be a doctor.”

A girlfriend introduced him to the opportunity to volunteer at Doernbecher Children’s Hospital, and he was sold.

“I volunteered in pediatric oncology for two years. I enjoyed it so much,” he said. “These kids, they woke up one day with cancer. It’s a lot to deal with, for the kids and the families. The doctors were there to cure it, but also to support them.

“Helping people and science — it all sort of clicked.”

Davis was an International Baccalaureate student in high school and started his freshman year with almost a year worth of college credits. He was able to declare a biology major and Spanish minor quickly and began working quickly down a pre-med route.

In the meantime, he volunteered, played soccer, participated in summer research, and took advantage of Winter Term travel opportunities to Ecuador, Kenya, Spain, France and Italy.

The Career Development Center helped him prepare his first round of medical school applications.

“I worked with Katie (Lardy) for 18 months. She was my organizer. She helped me just not to be so stressed out by being human,” Davis said. “A lot of people applied to a lot of places, but not a lot to med school, and none of my friends did anything like that. She helped me.”

He was advised to focus on private schools, but he had his heart set on attending medical school in California, where he has family. As it turned out, he wasn’t accepted.

But that wasn’t the end of his efforts.

“OHSU will tell you why you didn’t get in. When I followed up, they said I didn’t have enough clinic time. My scores and grades were fine,” he said.

Lardy, in the CDC, was able to pair Davis with a clinician at Virginia Garcia Memorial Health Clinics, where he spent the next nine months logging hundreds of hours shadowing a doctor, using his Spanish skills and gaining that needed clinical experience.

She also set up a mock interview setting to help Davis prepare for the intense series of eight-minute interview prompts that is part of the application process.

“We didn’t know what the questions would be, but she had people sit in different rooms and set up the entire interview as practice with random people,” Davis said. “It wasn’t the same, but it definitely helped me.”

In the meantime, his academic advisor, Biology Professor Lisa Sardinia, gave him a list of schools to consider on his second round of applications.

His soccer coach even helped him find a job coaching club soccer while he took his first-ever year off of school.

“The second time, I listened more carefully and applied at the only in-state school and at a lot of private schools out of state,” Davis said.

He was accepted at OHSU and is now finishing his first year, planning to become a surgeon.

“Every week when a new person comes in, I change the type I want to be,” he said. “I think right now, an orthopedic trauma surgeon, putting bones back together. Maybe a reconstructive plastic surgeon … and I think I want to work with kids.”

Whichever route, he says he believes he has the foundation to make it.

“The constant academic rigor at Pacific … med school is different, but it’s still the time and the rigor,” he said. “Being here prepares you for that.”