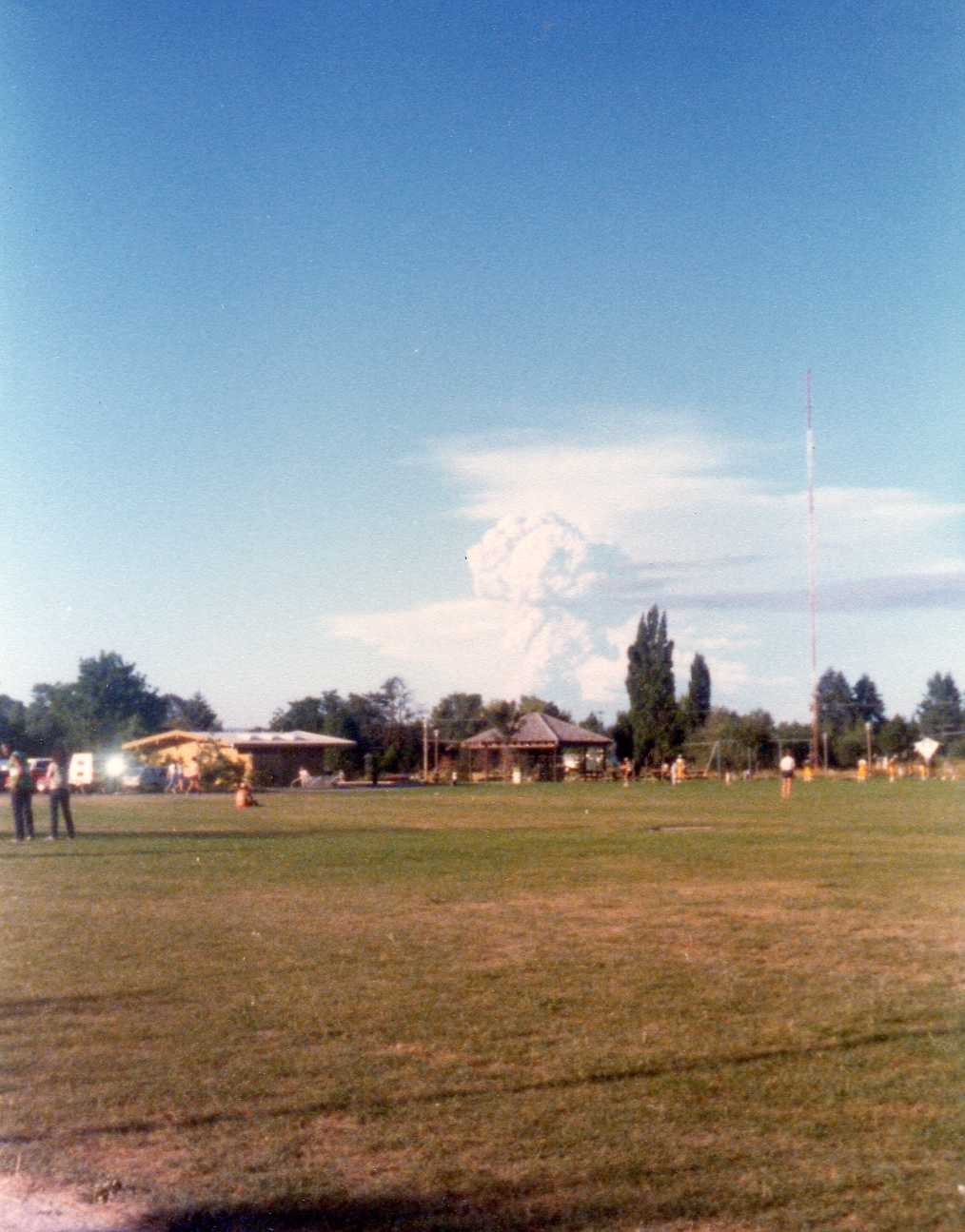 It was a Commencement Day like few others: Skies darkened, creating a contrast to the glowing sense of accomplishment felt by students and their families. People who wanted to attend couldn’t, and travel plans changed at the last minute. For those who were there, it was unforgettable.

Pacific University’s Class of 1980 graduated under the shadow of an active volcano on May 25, the date of a second major eruption of Mount St. Helens in southwest Washington. The first major eruption on May 18 blew the flank from the mountain, blasted debris down the Toutle River, buried forest campgrounds and buildings under mud and ash, and sent an ash cloud into the westerly air currents, which carried it around the world.

“I looked out the window of my apartment and I thought it was snowing,” remembered Willie Brosseau ’80. “My car was covered with inches of ash.”

Brosseau, who went on to a career in media production, said the volcano kept his family from attending the ceremony. They lived in Battle Ground, Wash., practically in the shadow of St. Helens.

Brosseau’s friend Jake von Scherrer ’80, also from Battle Ground, said his family members attended the ceremony, but not in the way they planned.

“My parents had a very nice 1979 Chrysler Cordoba, with Corinthian leather,” von Scherrer said, invoking the commercial tagline spoken by actor Ricardo Montalban. “I had a 1969 Dodge Dart. It certainly wasn’t pristine.”

Early the morning of Commencement, von Scherrer said, “Dad said, ‘We can’t go.’ And mom said ‘Of course, we’re going.’ And Dad said, ‘We’re not going in my car.’”

So 6-foot-2 Jake, his 6-foot father, his mother and sister crammed themselves into the Dart and trundled down the darkened landscape to Forest Grove.

The drive wasn’t luxurious, but, he said, “It was a lovely ceremony.”

According to a contemporary account in Pacific Today, the forerunner to Pacific magazine, the eruption didn’t interfere with Commencement, but it marked it indelibly in the memories of those who attended. 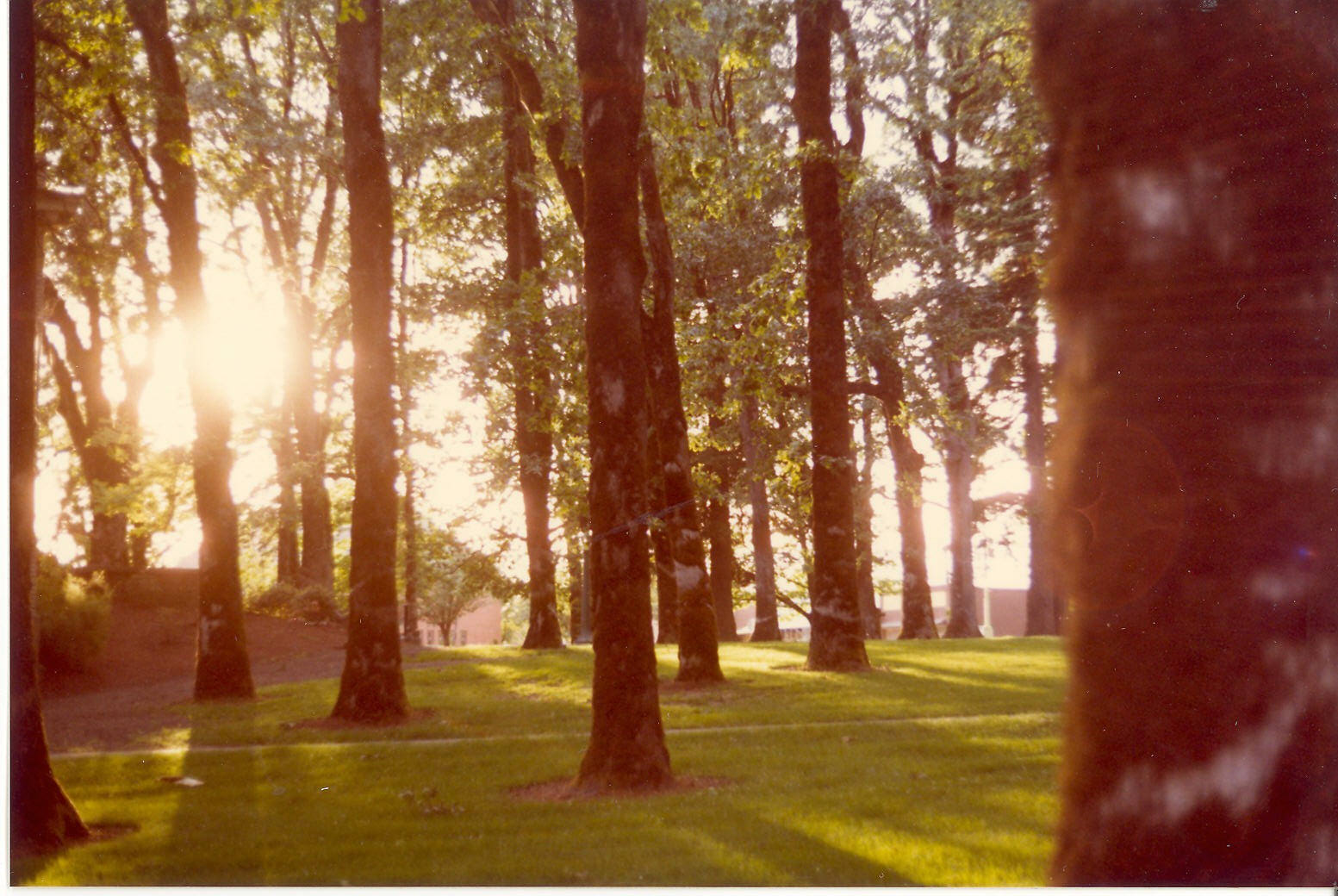 “… The white swirling dust didn’t smother any of the traditional ebullience and grandeur of the graduation day. Degrees were conferred on more than 325 students, the members of the Old Guard stood up to take a bow, and an exceptionally attentive audience responded warmly too the address by Norma Paulus, Oregon Secretary of State.”

It had to be a remarkable occasion for the Golden Guard, members of Pacific’s Class of 1930, the year Mohandas Gandhi was Time’s Man of the Year and Adolf Hitler won a crucial national election in Germany. They had lived through some of the most momentous events of history — the Great Depression, World War II, the Korean War, the Vietnam War, commercial air travel, the emergence of television, the moon landing — only to gather again in Forest Grove during the deadliest volcanic eruption in American history. All told, the St. Helens eruptions are believed to have killed 57 people directly and another four indirectly, from heart attacks and vehicle accidents.

Jeff Grundon ’80, now Pacific’s senior associate director of undergraduate admissions, said he was glued to his television set through the volcanic activity. He recalls watching videos of the unfolding cloud of ash and thinking it was a still photograph because it was so massive and appeared to be moving so slowly. He distinctly remembers watching replays of the televised interviews with local curmudgeon Harry Truman, a colorful character who lived at Spirit Lake and refused to leave the area despite the warnings. Truman and his house were buried in the May 18 eruption.

Grundon said the ceremony was held in the gymnasium and proceeded smoothly, but “there was still ash all around.” He and his mom and girlfriend went out for dinner in Beaverton afterward.  The day was, he said, “was kind of bittersweet.”

Another story in Pacific Today said Forest Grove “got more than its share of ash” from the eruptions of May 25 and June 12.

“For several days many people in Forest Grove wore face masks and turned on their car headlights during the day. With an accumulation of up to about 3/8ths of an inch of ash, the campus looked as if it had been hit with a giant bucket of white dust.”

The first task for maintenance workers and those pressed into service to help them was hosing off the driveways and sidewalks. It’s not as simple as it sounds.

Debra Carline ’80, who lived in Forest Grove with her husband Dennis Carline ’79, said the cleanup was messy.

“Washing the windows off was the wrong thing to do,” she said. “It’s like mud.”

Carline said it is striking that the graduating class of 2020 is following along with its own extraordinary Commencement season 40 years later. Due to restrictions around the COVID-19 pandemic, Pacific’s graduating students, families and friends are unable to gather in person for the traditional ceremonies, and the university is marking the occasion with virtual ceremonies now available on YouTube, until in-person gatherings are possible.

But, Carline said, things worked out for the Class of 1980.