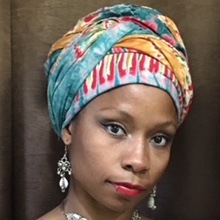 Jane’t Schab MA '18 has held to one mantra: Never give up.

Through a challenging childhood, family tragedy, balancing school and family, and an enduring long-term bout with breast cancer, Schab has come back to that phrase time and again.

And on Saturday, Aug. 11, it paid off, as she earned her master’s degree in applied psychological science from Pacific University.

“You can have it all if you keep trying,” she said. “I failed miserably multiple times with school. I was often exhausted and tired, but giving up was never an option. I continually refocused and pushed ahead, despite many people who told me I couldn’t do it. I used that as fuel for my fire.”

Schab grew up in the small Oregon town of Hermiston, part of just two extended African-American families in the community. She was one of just three African-American students in her 800-student high school in the 1990s, where she struggled, she said, in part because of implicit and explicit bias.

“I did not excel in high school,” she said. “I remember not having a lot of support from staff, counselors or teachers.”

She did graduate, though — only to face family tragedy shortly thereafter, when one of her sisters contracted West Nile Virus, causing permanent brain injury.

“The virus ate 13 holes in her brain and took significant portions of her personality and memory away,” she said. “It was a stressful and painful ordeal for the entire family.”

Schab eventually enrolled in programs for fashion design and paralegal work, as well as pre-law, before earning an associate’s degree in psychology, meanwhile marrying her high school sweetheart and having four children.

At age 29, though, Schab discovered a golf ball size lump on her chest that was later diagnosed as breast cancer. Numerous surgeries and rounds of chemotherapy ensued.

“I was young and had young children, and the toughest thing was feeling robbed of being a mother,” Schab said. “I became extremely sick and my bone marrow would expand continuously. I couldn’t take care of myself or my kids.”

Doctors removed seven of Schab’s lymph nodes, and she lost full range of motion in her left arm, made worse by extreme radiation to fight the cancer’s aggression.

In time, she recovered enough to move forward.

“I realized I got a second chance at life,” she said. “For those who have passed away from cancer, I wanted to take full advantage of this second chance for them as much for me.”

She promised God, herself and others that she would dedicate both her career and personal pursuits to endeavors that help others. Today, she volunteers at churches, where she does everything from leading prayer groups to ministering youth, and even cleaning toilets.

And, she has pursued a master’s degree in applied psychological science from Pacific University’s School of Graduate Psychology, where she has been student president and ambassador for the master’s program. In August, she was among 100 students to earn master’s or doctoral degrees from the school, which was among six College of Health Professions schools to confer degrees at Pacific’s August Commencement.

Her willingness to do whatever is needed has been a source of inspiration to her program cohorts and faculty alike. Schab received the school’s Community Service Award for master’s degree candidates.

“Pacific University has given me the opportunity to make anything possible,” Schab said. “In addition to build on my competencies, I also became much more aware of the importance of multicultural awareness and social justice for people of all ethnic and socioeconomic backgrounds, not just my own. I learned to be okay with opening myself up to being uncomfortable, being wrong and embracing humility. At Pacific, I was able to embrace my true authentic self, which was critical for my personal growth.”

Schab added that to truly benefit from all that higher education offers, students must be willing to step out of their comfort zones. While completing her clinical practicum at the William Temple House in Portland, Schab worked with a wide range of individuals who experienced behavioral problems, emotional distress, interpersonal difficulties, addictions, unhealthy home lives and lift transitions.

“That really helped me grow and understand my purpose within the science of psychology,” she said. “Pain and suffering is a significant part of the human experience, but there is beauty to be found through suffering because pain creates chances to grow.”