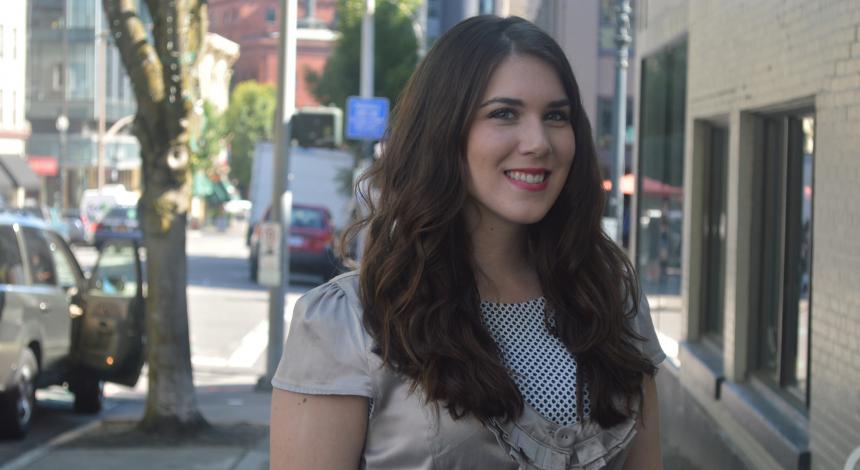 Priscilla Rader ’12 has never grown out of her “child-like appreciation” for animals.

She remembers visiting her grandfather’s farm in Galt, Calif., at age 13. She stole horse feed to give the chickens an expensive treat and convince them to like her. When her grandpa told her to stop, she didn’t listen. She spent hours feeding the chickens and trying to convince them she was not harmful.

“A week or two later my grandpa would see me walking the dogs, and a whole bunch of chickens would follow me, so I think he knew I didn’t stop,” Rader said. “I never really saw a difference between me and them or my dog and them. If I look into the eyes of an [animal], I see the similarities, not the differences.”

Rader has become a staunch advocate for animal rights. At Pacific University, she majored in ethics, society and law, specializing in animal ethics. Today, she works for the Animal Legal Defense Fund and is a law student at Lewis & Clark College.

Born in Carmichael, Calif., Rader was home-schooled through high school. As a teenager, she began speaking out for animal rights, because she owned a pit bull terrier, Lexi, and experienced breed discrimination.

“I would go to the council meetings and speak up against breed specific legislation and that was my first taste of it,” Rader said. “But it really just snowballed into something huge that has taken over my life.”

Rader started her college career at Mt. Hood Community College, where she was originally interested in literature, but was inspired by a Philosophy of Literature course. After she came to Pacific in 2010, she took Animal Ethics with Professor Ramona Ilea and Philosophy of Law with Professor Dave Boersema and discovered an interest in animal law.

“She took two of the most difficult classes we offer: Philosophy of Mathematics and a 400-level special topics in moral philosophy seminar,” Ilea said. “Priscilla is willing to challenge herself and learn as much as she can.”

During her two years at Pacific, Rader was a club historian for the World Awareness Club, dealing with poverty and women’s rights. She also was president of the Pacific for the Dignity of Animals organization, with which she volunteered at Lighthouse Farm Sanctuary, screened films such as Peaceable Kingdom, and hosted events like the annual meat-out celebration.

“We just tried to get the word out about animal ethics and what it means to be good to animals and for animals,” Rader said.

She also said she had excellent academic experiences. She was a research assistant for the university’s Sustainability Committee, as well as for Ilea in the Philosophy Department. She also was one of five students nationwide invited to attend an animal law conference in Raleigh, N.C., where she participated in small seminar discussions and listened to Ilea present a paper on the philosopher Dr. Tom Regan, who specializes in animal rights theory.

“Dr. Tom Regan is someone I admire greatly,” Rader said. “And I was able to see Ramona in action.”

After graduating from Pacific , Rader continued to work with animals. In 2013, she started law school at Lewis & Clark and also attended another animal law conference, the largest in the world. She was the student conference coordinator for the Animal Law Conference in 2014, and then became a litigation program law clerk, researching and writing memoranda for the staff.

“They work on creating a better world for animals through the legal system,” Rader said. “It’s been my dream organization.”

She also interned with Mercy For Animals in West Hollywood, Calif., for a summer, researching and documenting findings on state laws regarding undercover investigations.

And, she works for the Center of Animal Law Studies at Lewis & Clark and is helping edit a book on animal law.

Most recently, she’s also been working at the Wildwood Farm Sanctuary in Newberg, Ore., providing student outreach and working with college students to inspire and reshape how people treat and view farm animals.

“Regardless where I am, I will be dedicated to animals,” she said. “I came to law school for animal law, and that’s what I will be doing.”