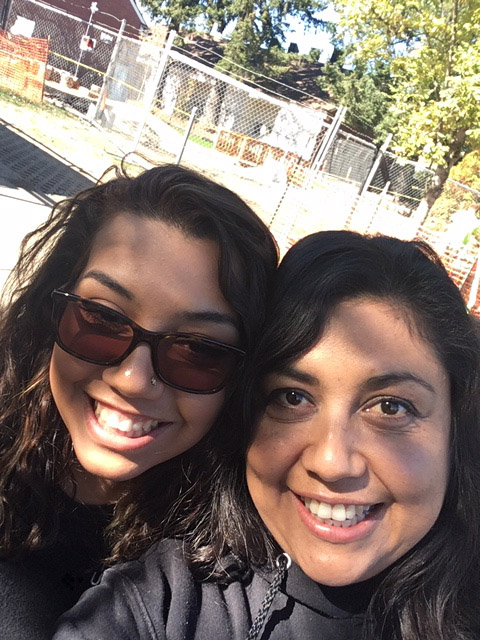 Pacific University’s May Commencement ceremony was doubly meaningful for Aurea Lomeli, 42, and her daughter, Leslie Lomeli.

Each received their bachelor of education degrees in the morning ceremony May 18 after studying together at Pacific’s Woodburn Campus for the past two years.

“I cannot believe it,” Aurea Lomeli said in a happy three-person phone call before the ceremony. “I still think it’s not real. To walk across the stage and wait for my daughter — I have so many emotions.”

The pair, who live together with Leslie Lomeli’s brother, sister and father, are the first in the family to earn college degrees, though a brother at Western Oregon University is close behind. Another sister is studying at Portland State University. Leslie’s father and Aurea’s husband, Ramiro Lomeli, has supported them all, she said.

The Lomelis completed Pacific’s bachelor of education in teaching and English language learning through the university’s Woodburn Campus. The program is designed for students transferring from community colleges who want to become teachers in their home communities.

That’s perfect for the mother-daughter duo, who both want to be elementary teachers in the Woodburn area.

Though they didn’t set out to be college classmates, it was never a far-fetched idea, said Leslie Lomeli.

Aurea Lomeli had been taking classes at Chemeketa Community College, where Leslie Lomeli started after graduating from Woodburn High School in 2015. They transferred to Pacific to complete their bachelor’s degrees simultaneously.

“My mom has been going to school for as long as I can remember,” she said. “And we both decided to be teachers.”

Aurea Lomeli took over: “I told her, ‘I think you could be a good teacher. You should think about that.’”

As they worked toward their degrees, mother and daughter did homework together and engaged in “healthy competition,” Leslie Lomeli said.

“I’ve known forever that my mom is incredibly bright,” she said.

Commencement on May 18 in Forest Grove was a celebration years in the making.

“It feels something like it’s a dream,” said Aurea Lomeli. “You’re working for so long. I don’t even have words.

“It feels like I can see the light now.”