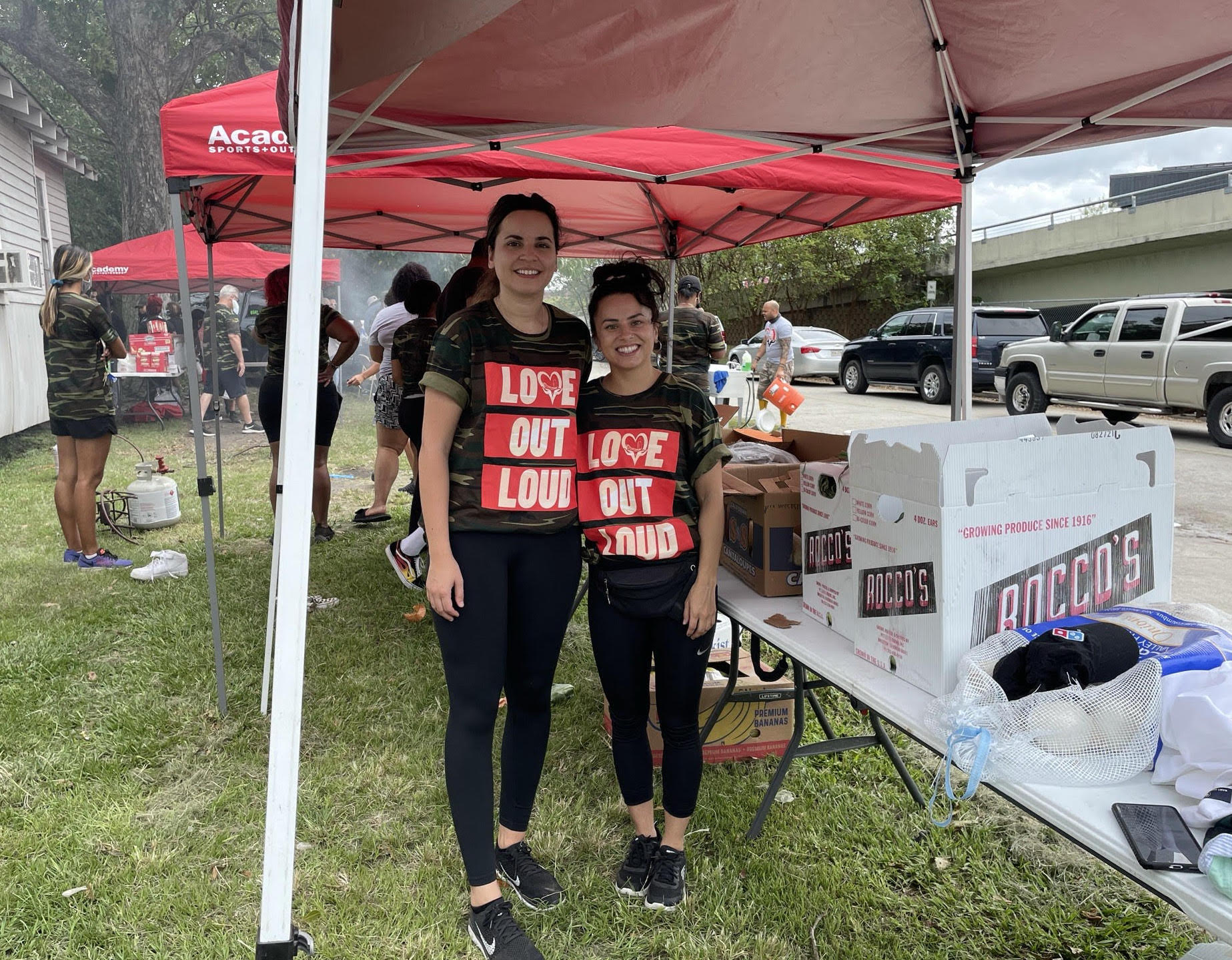 Hurricane Ida played havoc with the routines of two Pacific University College of Optometry externs, Bianca Mendoza OD ’22 and Melissa Constantinescu OD ’22. But they responded to the chaos by joining the effort to assist stricken areas of Louisiana.

It made their externship this summer one they’ll never forget.

The pair were on a three-month clinical rotation as part of work toward their optometry degrees. They were assigned to Ochsner Medical Center in Jefferson, La., just outside New Orleans, where they worked under their preceptor Breanne McGhee MED ‘16, OD ‘16.

Things were progressing smoothly — they were seeing patients, discussing courses of action for eye problems, and working daily with McGhee, a preceptor whom they loved.

But increasingly in late August, the talk in New Orleans turned to the approaching hurricane.

The two students, who grew up in the Pacific Northwest, didn’t know the rhythms of hurricane-jinxed regions like the Mississippi Delta. And the locals they talked to — their eye patients — gave them mixed signals. “Oh, you’ll be fine. Just stay away from windows,” one would say. “What are you two still doing here? You should leave now,” another would say. Their stress levels rose.

As it turned out, they got out just ahead of chaotic mass evacuations, as Louisianans who could flee the city did so.

When Ida struck, it packed a massive wallop. It became the second most-damaging hurricane ever to make landfall in Louisiana, after 2005’s Hurricane Katrina. Unlike Katrina, Ida didn’t cause the levees around the city to fail, so Americans didn’t see the images of houses surrounded by water and people standing on their rooftops.

But 115 deaths and $65.3 billion in damages are attributed to Hurricane Ida. It knocked out electricity in many places in Louisiana, leading to food shortages and dangerously oppressive heat, with no air conditioning to offset it.

Mendoza and Constantinescu watched from afar in sadness and horror, as the area they’d called a temporary home reeled from the hurricane’s aftereffects. They remained in touch with McGhee, who was, Constantinescu said, “very supportive.”

“It was such a hard thing to make the decision to leave,” Mendoza said. She said they recognized they were among the lucky ones who had the means to flee the city in a working vehicle and find a cost-free place to ride out the storm. “We felt really bad for the people who had to stay behind.”

So when they ventured back to New Orleans after 10 days in San Antonio, McGhee asked what they wanted to do. The hospital was restoring services a department at a time, and optometry wasn’t highest on the list. They could go to some satellite clinics, but they chose instead to seek ways to help the region heal. 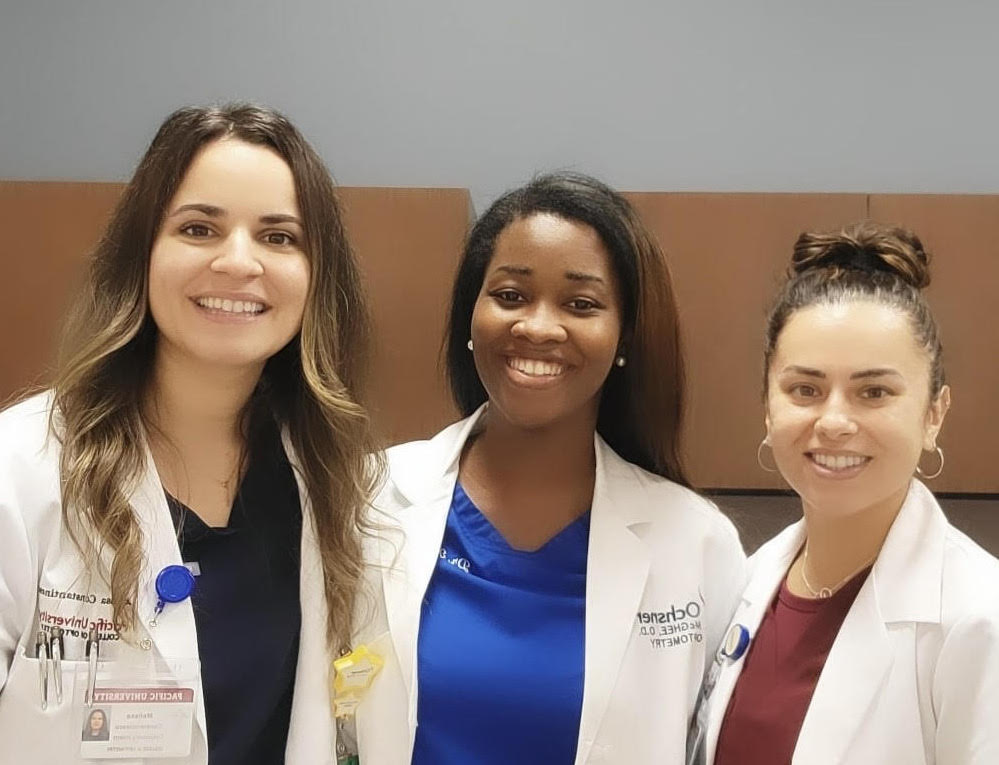 When McGhee asked the interns what they wanted to do, Mendoza said, “we 100 percent didn’t even think about it. We wanted to help.”

They volunteered at food distribution and cooling centers. They distributed clothing and food packages to those who needed them. They talked to people whose food had spoiled and whose roofs were damaged.

In a social media post, McGhee raved about their efforts:

“In August, my two students, Bianca Mendoza and Melissa Constantinescu began their clinical training at Ochsner Medical Center. Following the impact of Hurricane Ida, many parishes were devastated and some areas were completely destroyed. In addition, many cities in southeast Louisiana have been without power for almost two weeks. While Bianca’s and Melissa’s clinical externship was interrupted by the storm, their first response to Dr. McGhee was ‘What can we do to help?’

They have been putting in WORK!! They’ve volunteered at a local recreation center that was designated as a “cooling and charging center” for Hurricane Ida victims. They helped with hot food distribution, passed out resources and non-perishable items, and directed hurricane victims to FEMA services and COVID-19 testing and vaccination stations.

We at Ochsner and Pacific are beyond proud of these two ladies for stepping up! This is what it’s all about! #BoxerProud

“It was a different world,” Mendoza said. “It didn’t feel like it was part of the United States.”

For all its impact, Ida didn’t make a huge impression in faraway Oregon. Mendoza and Constantinescu said some people asked if they were all right, but others seemed to have no idea that they had survived a hurricane.

The entire, wrenching experience gave both students a heart for southern Louisiana. Constantinescu, who’s currently working at an externship in Santa Fe, N.M., and Mendoza, who’s working at hers in Lynnwood, Wash., both say they want to go back.

“The people were so amazing,” said Constantinescu, citing McGhee, the patients they saw and the people they met while volunteering. “I don’t know if I’d live there, but I would go back.”

Agreed Mendoza: “I absolutely fell in love with New Orleans.”