In 2011, Pacific alumni Clark ’65, MSEd ’70 and Aurora “Rae” Peters ’65 established a scholarship for the speech-language pathology master’s program, part of the School of Communication Sciences & Disorders in the College of Education at Pacific University.

The Aurora Peters Speech Pathology Endowed Scholarship provides financial support to students in the program who demonstrate a passion for serving the need of people with speech difficulties. 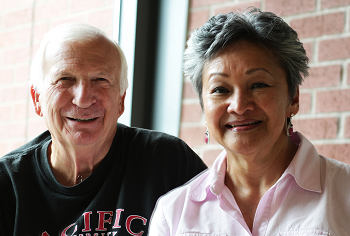 Since first being awarded in 2016, the scholarship has supported four speech-language pathology students with financial aid.

Now, Clark and Rae have ensured the success and longevity of their scholarship with another generous gift, pledged in December 2019.

They wanted to do something now that will impact the future, Clark said.

“We created the scholarship because I had such a great experience,” Rae said. “I wanted other students to have the same experience. I wanted to help students who have a desire to work with kids with special disorders, and I wanted to support our alma mater.”

Clark and Rae Peters made their way to Pacific by very different paths.

Clark, an Oregon native, was encouraged to attend Pacific by several high school football coaches who had connections to the university. Rae, who grew up on Oahu in Hawai‘i, transferred to Pacific after two years at a large state school.

Once at Pacific, they both found their life’s passion, and each other, in a speech class.

“I remember the class when I first saw her,” Clark said. “It was a speech phonetics class. I can still tell you what she was wearing.”

“I can tell you what he was wearing too, and let me tell you, I didn’t like it,” Rae joked.

Clark earned a bachelor’s in speech and master’s degree in education, both from Pacific, and competed on the speech and debate team, in addition to serving as vice president of the student senate and rushing the Phi Beta Tau fraternity.

Rae started out as a Spanish major but switched majors at the urging of her speech professor, Hap Hingston. She wound up doubling majoring in speech and speech pathology instead. She was a member of Nā Haumāna O Hawai‘i, the Students of Hawai‘i Club, and also participated on the debate team once she and Clark began dating.

Both Clark and Rae loved their time at Pacific and realize that it was a special and unique school to attend.

“At Pacific,” Rae said, “classes were smaller and you were friends with the professor. There was just a feeling of friendship and that you were an individual.”

As for Clark, it was the campus life that made Pacific unique.

“There was an atmosphere at Pacific that’s very welcoming,” he said. “They want students to succeed and be a part of life at the university.”

Clark and Rae married in 1965, right after graduation, and both embarked on careers in education. Rae worked as a speech therapist for several years and then taught kindergarten for 33 years. Clark taught speech at the high school level for a few years after graduation before joining the Oregon Education Association as a labor rep, where he spent three decades representing schoolteachers and employees in bargaining relationships with school districts.

With speech being such an important part of both their lives, it only seemed right that when Clark and Rae decided to support Pacific with a major gift, their gift would help speech-language pathology students.

“There’s a warmth and feeling that you get that comes from knowing you’re sharing in the future of the university, and the lives of these students,” Clark said.

As they look to the future of their scholarship, and Pacific University, Clark and Rae hope their gifts will help and support speech-language pathology students for years to come.

“If it will help other kids,” Rae said, “it’s worth all that we can give to share from our finances.”