The day before The Queen’s Medical Center in Honolulu planned to announce its 2019 Employee of the Year, the event was canceled because of the COVID-19 pandemic.

Instead, Ryan Moore ’07, PT ’10 was taken into a conference room and informed that he had earned the recognition for his work as a physical therapist.

“It was pretty humbling to be recognized for such a big award,” Moore wrote in an email. “I didn't feel deserving of it, but I was happy to accept it on behalf of my rehabilitation department who come to work and do amazing things every day for our hospital.”

Outside, Moore’s teammates were waiting to surprise him with signs and leis. 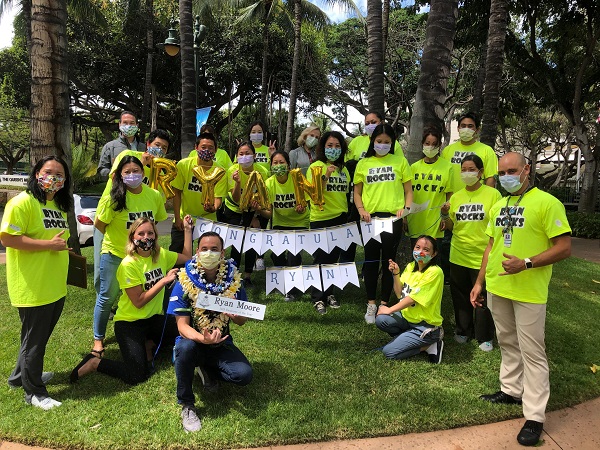 “It was perfect for me to get to celebrate quietly with just my team,” he wrote. “I'm not one for big fanfare, especially knowing that we still have many more great things to provide for our hospital and patients.”

Moore grew up on O’ahu and came to Pacific University sight unseen after a visit to his high school by recruiter Jeff Grundon. Though he had not visited the campus, Moore was already familiar with the university — both his parents, Allyson (Ogi) Moore, PT ’83 and Kevin Moore ’82, OD ’84, had attended; his younger brother Sean Moore ’11 and sister Kelly Moore ’13, would also end up attending. Moore also met his wife, Erin Tagami ’08, PT ’11, while they were both studying at Pacific.

“In total, including my wife, my family has spent 35 years at Pacific,” Moore wrote.

The school’s strong connection to Hawai‘i and a large contingency of students from the islands made Moore feel confident in his decision to attend Pacific. The scholarships he received influenced his decision, as did knowing that Pacific had a strong physical therapy program, the field Moore wanted to specialize in.

Moore’s mother had studied physical therapy at Pacific and would tell stories about her work at dinner every night while he was growing up, but it took a shoulder dislocation and subsequent surgery to pique Moore’s interest in physical therapy.

Once at Pacific, Moore used his undergraduate degree in exercise science as a platform to get into the School of Physical Therapy’s doctorate program. 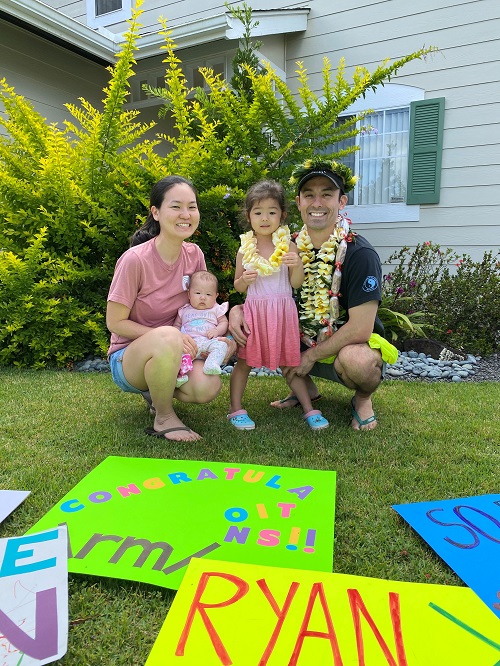 “I was pretty set from the first day as an undergraduate that I was committed to Pacific all the way if I was going to stick with physical therapy,” Moore wrote. He connected quickly with several professors, who he said laid the groundwork for his success in the physical therapy program.

From the start, Moore was a very active member of Nā Haumāna O Hawai‘i (NHOH), the Students of Hawai‘i Club.

“We joke that Uncle Jeff was the one who got you to Pacific, and Aunty Edna was the one who kept you there. Having highly influential, positive parent figures when you're 2,500 miles across the Pacific makes a huge difference,” he wrote. He was also the Pre-Physical Therapy Club president, co-started an indoor soccer club, and was on the school's Peer Review Board, in addition to playing on the handball team for three years, competing at the nationals all three of those years.

Moore had several job offers even before graduating and decided to return to Hawai‘i to work.

“With my grandparents getting older, I felt like it was the right move at the time,” Moore wrote. “It was an opportunity to both be closer to family again and get a jumpstart on my career right out of the gate.”

Moore has worked at The Queen’s Medical Center for seven years as a physical therapist for the sports medicine and orthopedics departments.

“I do work with a very broad range of patients, as our hospital mission is to especially service the underserved people of Hawai‘i, which I really enjoy a lot,” he wrote.

The best part of his job, he wrote, is having such a direct and personal impact on the patients he works with. Physical therapists get to spend significantly more time with patients than other healthcare providers do, according to Moore.

“Our job is predicated on improving quality of life, and we get to meet and talk with people from all walks of life,” he wrote.

Since the pandemic struck, work has been different, with social distancing, mask wearing, and endless cleaning. But he considers himself very lucky to have continued working. He has focused less on patient care and transitioned to the hospital’s “manpower pool,” working in receiving and supply to help organize and move all the personal protective equipment the hospital’s employees needed. He’s also had more time to spend with his wife and two children, ages 4 and 4 months old.

In reflecting on his time at Pacific, Moore wrote that the school was tremendously influential in getting him to where he is today.

“Pacific gave me the skills, confidence, and emotional support to be encouraged to do great things and work hard,” he wrote.

“It's really the people of Pacific to me that separates it from other schools. The culture of 'ohana is deeply ingrained and rooted in the success of Pacific.”