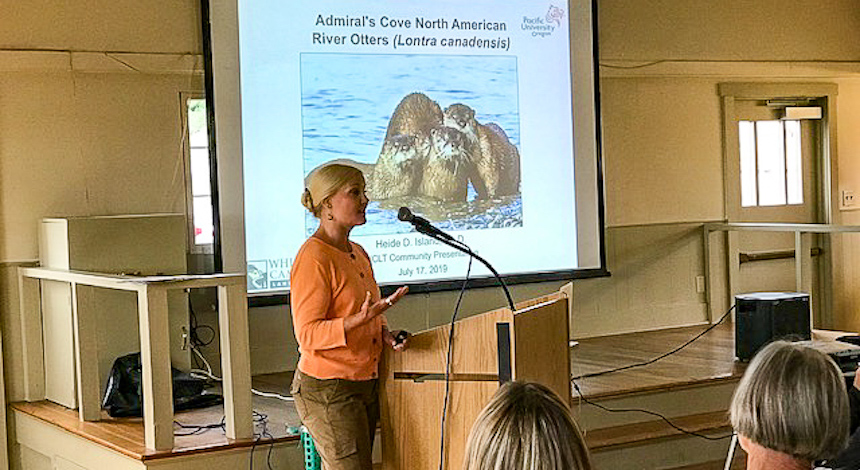 Pacific University undergraduate psychology professor Heide Island has spent the past 10 months on Whidbey Island north of Seattle to continue extensive research she is conducting on the behavior of river otters.

Dr. Island, who is also a senior research associate at the Oregon Zoo, presented her most recent findings to the local community through the Whidbey Camano Land Trust on July 17.

She told the Whidbey News-Times that Admirals Cove and its close proximity to Crockett Lake, two watersheds within her research area within the region, have created an ideal location for river otters, which live in a variety of habitats and hunt in both fresh and saltwater. Otters are an "indicator species," as they serve as an indicator of the ecological health in a given habitat, she explained.

Island’s sabbatical research is the foundation for a five-year longitudinal study on Whidbey Island that will include Pacific University students and local citizen scientists in the summer of 2020.

Island is researching river otter foraging behavior in fresh and marine habitats and how otters maximize prey resources as a consequence of seasons, time of day, tides, current speed, and sea state. She is also working to establish a genetic pedigree among the Admirals Cove otters as well as some otters across the island and the ascertain the health of the watershed through contaminant load via what she calls "leavings.”

Pacific’s undergraduate Psychology Department instills the key concepts, traditions and findings associated with modern psychology, from comparative psychology across species to the building blocks of personality, including the subfields of neuroscience, cognition, sociocultural, developmental and psychopathology.

Pacific University is the No. 1 private university for research endeavors in the Pacific Northwest, and ranks in the top 10 on the entire West Coast.