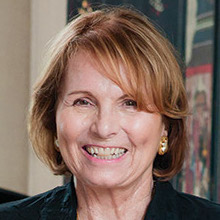 Pacific University will award an honorary doctorate of humane letters degree to Mary Fair Berglund '58, PhD on Saturday, May 18 during the university's spring undergraduate commencement ceremony.

Along with her husband and fellow alumnus Jim Berglund OD '60, Mary Fair Berglund is among the university's most distinguished alumni. Her commitment to the greater good throughout her career, as well as tireless efforts to support funding for scholarly research, is unsurpassed.

The Berglunds' philanthropic leadership has resulted in innovative learning environments and opportunities throughout Pacific, most notably the addition of Berglund Hall on the Forest Grove Campus in 2007, the founding of the College of Business in 2013, and the Berglund Center, an on-campus incubator for students to develop and launch new products and services ideas.

As an academic economist, Fair Berglund specialized in government regulatory policy involving public utilities, antitrust and freight transport, as well as the economics of transportation. She has served as a consultant for the U.S. Department of Agriculture and the Association of American Railroads, and as a board member for numerous entities, including the California Transportation Commission, San Diego Transit Corporation, the University of California, San Diego, UCSD Foundation and the City of San Diego Energy Advisory Board.

Since 1984, Fair Berglund has served as executive vice president of J. Berglund Company, a private asset and portolio management in La Jolla, Calif., where she specializes in finance and institutional investment portfolio management. She is currently a trustee and treasurer of both the Charles Lee Powell Foundation and the ResMed Foundation, as well as chair of the Powell Foundation's Investment Committee, which has funded more than $105 million in grants for engineering research at Stanford, Caltech, USC and UC San Diego.

In addition to overseeing the ResMed Foundation's endowment, Fair Berglund also serves on its Philanthropy Committee. She also serves as a trustee, past treasurer and president of the Museum of Contemporary Art San Diego, and is a member and supporter of a number of other civic, arts and non-profit organizations throughout the San Diego area.

Fair Berglund will be the second Pacific honorary degree recipient in as many years, following the university's 2018 conferral on Pacific trustee and KISS lead guitarist Tommy Thayer.

Pacific's undergraduate spring commencement ceremony begins at 9:30 a.m. and takes place at Hanson Stadium on the north side of the university's Forest Grove Campus. Admission is free and additional information is available at pacificu.edu/commencement.