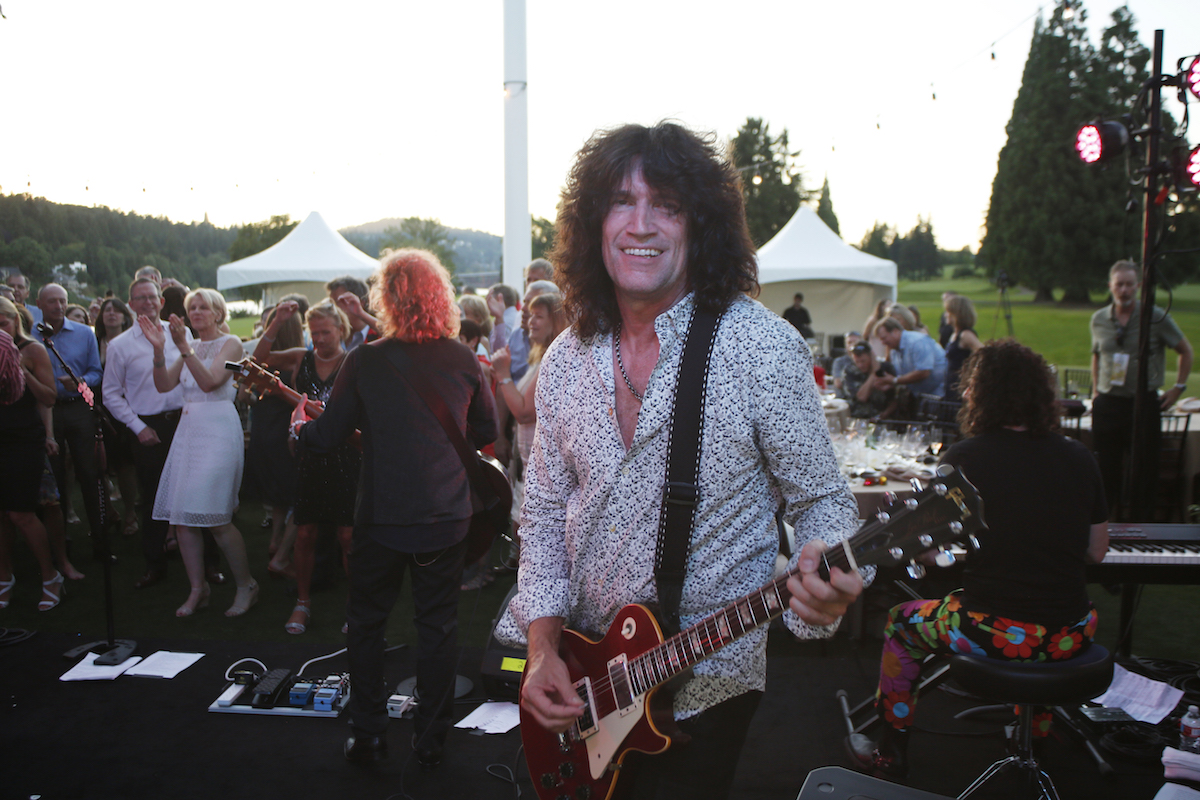 When iconic rock band KISS descends on Portland this week for the second stop of its End of the Road World Tour, it will mark a homecoming for lead guitarist Tommy Thayer, a Beaverton native and longtime Pacific University trustee and supporter.

In light of KISS' farewell concert in Portland, slated for Friday, Feb. 1, Pacific congratulates Tommy for this incredible milestone that is part of his tremendous musical career spanning more than 40 years. Additionally, the university expresses its sincere thanks for Tommy's long-standing support of Pacific and his many other philanthropic ventures.

Last spring, Pacific proudly bestowed an honorary doctorate of humane letters on Tommy for his leadership efforts that have helped thousands of Pacific student-athletes over the past 12 years, and for his continued support of the university's intercollegiate athletics and music programs.

A 1978 graduate of Sunset High School, Thayer has served on Pacific’s Board of Trustees since 2005 and helped the university generate more than $3.5 million for its NCAA Division III intercollegiate athletics program, primarily through a highly successful celebrity fundraiser Legends, which ran from 2007 to 2016.

In 2016, the 10th anniversary Legends event launched the creation of the Tommy Thayer Endowments for Music and Athletics, benefiting students in both programs at Pacific. In the Music Fund's first year, five new pianos have been purchased for the rapidly expanding Music Department, which has seen a record enrollment this past fall.

Thayer's career flourished not long after graduating from Sunset. He formed hard-rock band Black ‘N Blue and relocated to southern California in the early 1980s. He later joined KISS as a producer, songwriter and business manager before becoming the band’s lead guitarist in February 2003, during which time the band has performed more than 650 times.

With a desire to give back to the community where he grew up, Tommy Thayer accepted a nomination to join Pacific’s Board of Trustees from President Emeritus Phil Creighton, who had learned of Tommy’s interest from Tommy's father, fellow honorary degree recipient Brigadier Gen. James Thayer, Hon. ‘09 (dec.).

Over the course of 10 years, upwards of 300 attendees annually enjoyed an exquisite auction and dinner, intimate concert featuring some of the world’s greatest musicians, and played golf with the likes of KISS co-founder Gene Simmons, comedian/actor George Lopez, PGA pro John Daly, NFL Hall of Famer Eric Dickerson, Thayer himself and many more.

Funds raised at Legends directly led to the successful reinstatement of the university’s football program, creation of the Boxer Learning Center for student-athletes, facilities renovation and expansion, and ultimately, perpetual support of Pacific’s music and athletics programs through the Tommy Thayer Endowed Funds.

Thayer’s philanthropy is certainly not limited to Pacific. He has been a staunch supporter of the U.S. military and veterans, both through KISS concerts (for active duty servicemen/women) and individually. In 2012, he spearheaded the All-Star Salute to the Oregon Military to help raise funds in support of the new Oregon Military Museum.

Thayer’s interest in combining music and golf for a worthy philanthropic cause is also apparent in an annual benefit concert he performs in La Quinta, Calif., for the Tradition Golf Club Arnold Palmer Education Fund. To date, he and Pacific Trustee Emeritus Dan Dutton have raised more than $3 million in support of the fund.

KISS' concert in Portland's Moda Center is the second stop on the band's "End of the Road World Tour" that will span North America, Europe, Australia, New Zealand and Japan in 2019. KISS last played in Portland in November 2009 as part of its "Alive 35 World Tour."