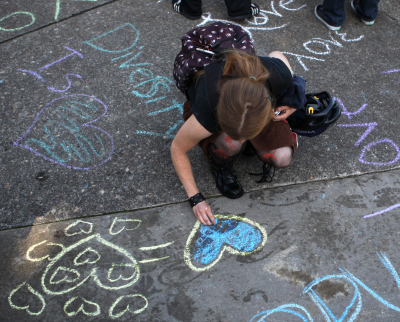 Pacific University has established a new Center for Peace and Spirituality. This center will provide students with a welcoming environment to explore their own beliefs and understand others, and to continue Pacific’s long tradition of connecting academics to service and community.

Directed by Dr. Dave Boersema, the Center for Peace and Spirituality will serve as a support for students as they discover and challenge their own belief systems, and as they explore peace and spirituality within a global society and within themselves.

It is an outgrowth both of previous programs at Pacific and modern student demand, said Boersema, chair of the philosophy department. It has its roots in Pacific’s peace and conflict studies program, which started in the early 1980s, and in the later peace and social justice program that evolved in the 1990s and early 2000s.

It also stems from conversations with students who want to put their learning and beliefs into more visible action, he said.

“We heard from students that they wanted a more public face and place on campus where they could live out their moral convictions,” he said. “We’re fostering this notion of spirituality as inner peace, as finding or creating peace in one’s self.

“It’s kind of the flip side of interpersonal peace with others. They feed on each other and both are necessary. You aren’t going to find inner peace in a society that is unjust, and vice versa.”

The Center for Peace and Spirituality will work to nurture a welcoming and safe environment for explorations and expression of spirituality, as well as peace and social justice, he said. In the long-term, that may include designating a space for groups to gather, but initially the center will partner with and support students and groups interested in peace and spirituality.

Academically, the Center for Peace and Spirituality also is connected to existing undergraduate minors in comparative religions and in peace and social justice. Boersema said future academic offerings might include additional minors, new majors, or a certificate program, such as in conflict resolution.

The Center for Peace and Spirituality also will work closely with other centers on campus, notably the Center for Civic Engagement, Center for Gender Equity, Center for a Sustainable Society and Tom McCall Center for Policy Innovation, all of which share a piece of supporting University values of discovery, diversity, civic engagement and global community, Beorsema said.

Work with these centers will lead to the University establishing a broader network of partners locally, nationally and around the world; to identifying more internship and service opportunities for students; and to bringing more speakers and events to Pacific University’s campuses.