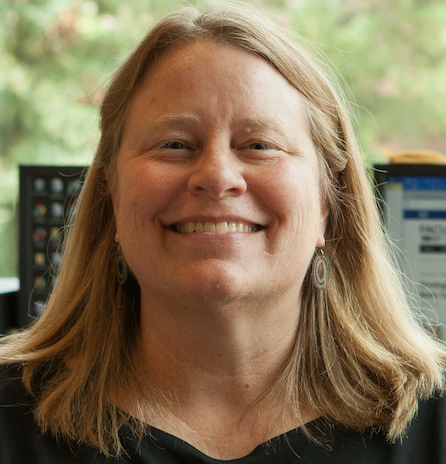 Dr. Sarah Phillips, who has served as interim dean of the Pacific University College of Arts & Sciences for the past 16 months, has been selected to continue the role on a permanent basis, Provost John Miller announced today.

“I am extremely pleased that Dr. Phillips has agreed to continue leading the College of Arts & Sciences for the foreseeable future,” Miller said. “She is a strong advocate for the liberal arts and sciences, a great communicator both within the university and externally, and is greatly valued and respected by her counterpart deans here at Pacific.”

Miller said Phillips has worked tirelessly with all members of the university’s executive administration to move the institution forward, despite the continuing challenge throughout higher education to keep it affordable and accessible to people of all backgrounds.

“As interim dean, Sarah has played a large role in stabilizing the College of Arts & Sciences enrollment while working with faculty and staff on initiatives to create new programs and enhance existing ones,” Miller said.

These include new core requirements, a revised academic calendar and proposals for innovative structural changes to position the college and university to maximize student recruitment and retention toward the ultimate graduation of a diverse student body, he said.

“Sarah’s accomplishments thus far as interim dean impart tremendous promise for the College of Arts & Sciences under her continued leadership,” Miller said. “I look forward to continuing to collaborate with her to chart the college’s future, as it is a critical component to the university’s standing as a leader in higher education.”

Phillips has been a member of Pacific’s faculty since 1995 as a professor of sociology, with additional research and teaching experience in related disciplines, including anthropology, gender and sexuality studies, public health and social work.

Prior to her appointment as interim dean, she served the university as associate dean for the university’s College of Business after a term as Arts & Sciences associate dean and School of Social Sciences director. In the latter role, Phillips successfully spearheaded the college’s efforts to add both bachelor’s and master’s degrees in social work. She has agreed to continue as Arts & Sciences dean for the next five years, effective Nov. 1.

Phillips spent her formative years in Southern California, largely on the Claremont College campus where her father served on the faculty.

She is a 1986 alumna of Whitman College (Wash.), as well as the University of Minnesota, Twin Cities, where she earned a doctorate of sociology in 1993. After completing her post-doctorate work at Yale University Medical School back in New Haven, Phillips realized that Pacific offered exactly what she wanted as a college educator: the chance to help young people identify their life's passion and purpose.

"I really believe in the chance for students to reinvent themselves when they come to college," she said, adding the opportunities are becoming more scarce and difficult with the rise of social media. "The chance to become somebody different is part of what is so magical about residential liberal arts schools. That opportunity to be different and reinvent yourself is so powerful. I wanted that as an undergraduate student, and I think a lot of students who come to places like Pacific want that. That's what drew me to Pacific."

Phillips also said her role as an administrator is something she never set out to do when she began her professional life in academia. But she embraces the opportunity to protect what she sees as a fundamental element of higher education: self-discovery.

After finishing at her post-doctorate work at Yale, she said wanted to teach at a school where faculty members are supposed to spend their time with undergraduate students, first and foremost.

"There are not many places like that anymore, where your job as a professor is to help young people figure out what they want to do and be in the world," she said. "That's a pretty fantastic job, and I believe that's why faculty come to the Pacific College of Arts & Sciences. They want to spend time with undergraduates, and I want to be part of making sure that stays possible in the future."

Phillips noted that the past 16 months have gone well. "Our faculty have done a great job in responding to highly variable circumstances," she said, adding that they understand the challenges we face at Pacific and have adapted well.

"There's a public perception that universities are immobile and don't change. That's not the case here in the College of Arts & Sciences. Our faculty and staff adapt and change quite quickly and thoughtfully, and I appreciate that."

As interim dean, Phillips said her increased collaboration with Pacific's non-faculty staff has been an unanticipated opportunity of her new position. "I've enjoyed getting to know more of the staff and have seen firsthand how hard our staff members work at helping our students progress through their college experiences."

Pacific’s College of Arts & Sciences is rooted in a tradition of teaching the liberal arts and sciences through an interdisciplinary approach in which students learn how seemingly unrelated topics share important characteristics that shape the world in which we live.