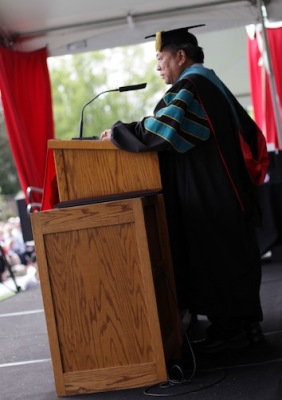 Yamane received the award from Massih's brother, Fariborz Maseeh, during the university's Professional Schools & Programs Commencement ceremony on May 19.

The honor is named after the late Kamelia Massih, a 1985 College of Optometry alumna who passed away in March 2010 following a three-year battle with cancer.

Massih cared deeply about others, giving countless hours of time and financial resources to a wide range of local and national charities. She was a loving wife and mother who enjoyed the fine arts, including music and dance, as well as the outdoors and traveling.

He founded Eye Care Associates of Hawai'i and grew it into one of the premier contact lens practices in the country during 24 years in clinical practice.

Yamane traveled throughout the world to teach fellow optometrists about corneal physiology and the benefits of frequent contact lens replacement.

He has authored many articles and book chapters and has held numerous leadership positions within the profession, including president of the American Optometric Foundation.

His tireless support of students and practitioners are well documented and have set the standard by which others follow, Pacific Provost and Vice President of Academic Affairs John Miller said during the ceremony.

"I am flattered to receive this tremendous honor that remembers a very special person, Dr. Kamelia Massih," Yamane said. "I will always cherish the fact that it is named after someone so dedicated to the type of life she lived," Yamane said.

The Kamelia Massih Prize consists of a plaque and monetary stipend from a trust established by the estate of Dr. Massih. In addition to expressing admiration for Massih, Yamane said he was honored to follow 2011 recipient and the initial prize winner, Dr. James Berglund O.D. '60.

Like Berglund, Yamane donated the stipend to Pacific that assists optometry students.

Yamane thanked Massih's family, the University and his own family, including wife Joyce Yamane (nee Tamura), his three children and deceased parents.

"In 1961, I was a shy, nervous kid from Hawai'i," Yamane said. "I followed my dream to Pacific to become an optometrist. There was some rough sledding along the way, but perseverance and the support of many here at Pacific opened up opportunities for me I never thought possible."

Yamane and his wife Joyce met on the plane to begin their studies at Pacific. Tears welled as he expressed his admiration and love for her unconditional support throughout his life.

"Joyce was and is the source of my strength," Yamane told her. "You are truly the wind beneath my wings."