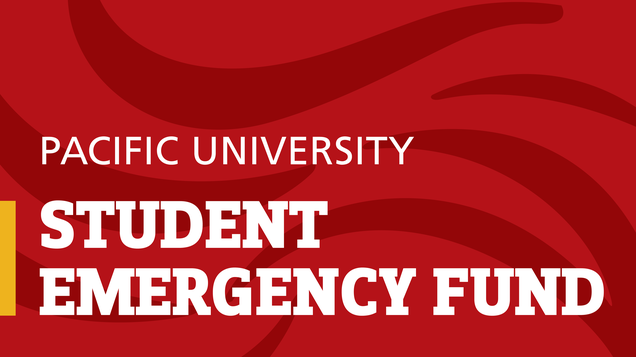 Earlier, members of the Undergraduate Student Senate voted unanimously to reallocate $20,000 to the Student Emergency Fund, with the possibility of more contributions to follow.

As of April 30, the Student Emergency Fund had collected $83,935 from 325 donors — an impressive response to the pandemic, but still short of the amount needed to respond to all the applications from students for emergency financial help.

“We are extremely grateful for the generous support we have received and continue to receive from the Pacific community for our students in need,” said Mandi Montplaisir, the university’s director of leadership annual giving.

Pacific has provided initial grants of roughly $60,000 to more than 100 students, but has so far received applications for about twice the amount. The money is going to compensate for the loss of income to students and families who still need to pay for utilities, groceries and other essential items.

The Undergraduate Student Senate wanted to “do something impactful that can help students now,” said Student Senate President Fernando Lira ‘21, who has returned to his family’s home in Brookings, Ore., on the southern Oregon coast. Lira presided over a Zoom meeting of the senate, in which 17 people participated. Lira and Student Life Director Steve Klein proposed the idea, and the students were immediately supportive. Lira said one told him the vote “gave me goosebumps.”

The Student Senate funds a variety of clubs and activities each year, but this year, in addition to its usual budget, it was carrying roughly $80,000 that was rolled over from the previous academic year. Since students have scattered and campus events have dried up as a result of measures taken to avoid infection by the novel coronavirus, money for the emergency fund was available.

In addition, the Undergraduate Student Senate intends to give money to the university’s Theatre & Dance Department to fund the production of surgical masks, an initiative the department embarked on earlier this month.

After hearing the proposal to redirect $20,000 to the emergency fund, Lira said student senators believed they could do even more. The senate regards the initial contribution “a good starting point,” he said. “There’s big support,” he said. “This is something they’re really passionate about.”

The Undergraduate Student Senate budget is funded by student fees paid as part of a student’s package of tuition and fees.

This story was updated on April 30.