'The Thrill of a Lifetime'

Hiking the Grand Canyon has long been on the “bucket list” for Bill and Cheron (Messmer) Mayhall ‘64.

But when the couple, 68 and 69, respectively, made reservations more than a year ago for their February 2012 trip, they had no idea that Cheron would make the hike while battling her second bout of breast cancer.

“Of course, we had to be realistic about our planning,” she said.

“But I never succumbed to the idea of not trying to prepare for, then attempt, the canyon fete.” 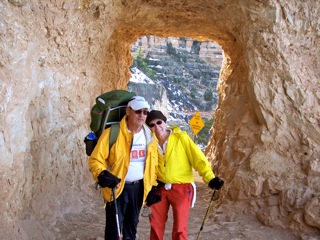