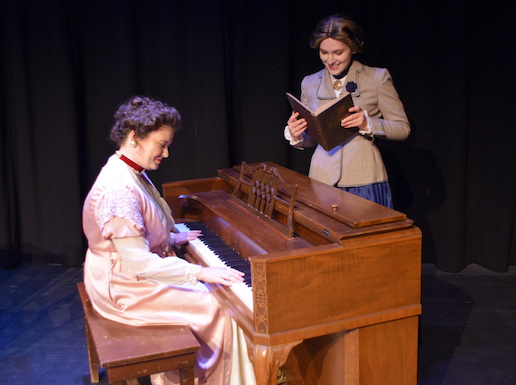 Silent Sky explores the life and career of Henrietta Leavitt, a human computer at the Harvard College Observatory in the early 1900s. Based on a true story, the play begins with Henrietta’s decision to join Edward Pickering’s team of women computers in studying the stars.

Joined in the office by feisty and fierce female compatriots Annie Cannon and Williamina Fleming, she takes a particular interest in Cepheid stars. We see her, over the course of fifteen years, continue to fight for her work amidst pulls from family and potential romance. It’s that fight that ensures her legacy and cements her name in the history books.

"We are very excited to share with our audiences, an experience of art and science coming together," director and Pacific Theatre and Dance Department Chair Ellen Margolis says. “Henrietta Leavitt was a woman with a disability, and sometimes the messages she received were, frankly, discouraging. Had she not persisted relentlessly, a major leap in our ability to measure the universe would not have been made when it was. This absolutely speaks to our time, when the voices of women are being heard more clearly than any time I’ve ever experienced.”

In real life, Leavitt suffered from hearing loss. As Gunderson translates that experience into the play with the use of a hearing aid, so too will sound designer Brennan Staffieri '20. He plans to represent, but not necessarily simulate, Leavitt's hearing loss through soundscape design. “As a person with significant hearing loss, it is important to me to get this right,” he says.

Margolis also reached out to professors of physics at Pacific University to help bring to life the scientific concepts Leavitt and her comrades were studying. Professor Todd Duncan spent time with the cast, and has graciously offered to have telescopes available outside the theatre during some of the performances, weather permitting.

“We’ve been thrilled to have Professor Duncan teach us the science we need to understand for the play, and to connect with other faculty, clubs, and classes on campus in a wide range of areas,” Margolis says.

Inside the theatre​​​, scenic and lighting designer Tal Sanders plans to employ specially designed drapes that will allow fluid movement between locations through projected imagery, while maintaining space for the characters to inhabit their world unimpeded.

“I was inspired by the need for creating a view of the heavens that so fascinates our central character, so that the audience too can share her passion for and delight in its mysteries.”

The show will have four performances in the Tom Miles Theatre (Warner Hall) on Pacific's Forest Grove Campus, with evening performances beginning at 7:30 p.m. Thursday, Oct. 18 through Saturday, Oct. 20, and a 2 p.m. matinee on Sunday, Oct. 21. Attendees of the Thursday and Sunday performances will have an opportunity hear from the cast and crew following the show.

General admission is $8, and $5 for Pacific University students, employees and alumni. More information is available at pacificu.edu/theatretickets.

For more information, please contact Dr. Margolis at 503-352-2752 or margolis@pacificu.edu