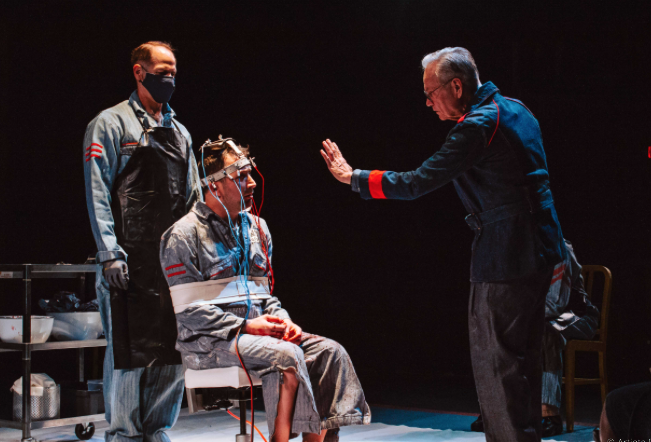 You’re sitting in the dark, in a crowd of people.

In front of you, on a stage, a man is being tortured.

Maybe you don’t even register what’s going on in your body.

Welcome to 1984, the George Orwell story that’s being performed in Portland this month by Artists Repertory Theater.

The story resonates; the tension is gripping; the performances are affecting.

How affecting? Well, a pair of Pacific University professors and their students are trying to find out.

Associate Professors Kathryn Dolphin and Brian Jackson of Pacific’s Exercise Science Department are taking part in the Artists Rep production at the same time they are conducting research into the galvanic skin responses and heart rates of audience members. Throughout the production, they have been wiring volunteer members of the audience in an effort to capture their physical responses to what they witness in the performance of 1984. It’s a meta-exercise they hope will yield some useful information about the effects of viewing a dramatic live performance.

The thing they’re seeking to learn, Dolphin said, is “how people react to stressful situations.” And then, to determine “ways to manipulate their reactions.”

Typically, exercise scientists elicit stress in a lab, or in controlled situations, such as when a subject is required to speak in front of an audience. But 1984 presents a new range of possibilities, as audience members react to loud sounds, to the presence of rats, to scenes of torture, and even to a direct appeal for their help by a cast member.

Recording galvanic skin response — changes in the skin’s electrical resistance caused by perspiration — has been more challenging, he said, because audience members have to avoid dislodging or shaking the recording devices. Few people sit through an entire live performance without fidgeting somewhat.

“This hasn’t really been done in theatre before.”
—Kathryn Dolphin

The Pacific professors were drawn to the project when two Artists Rep marketing officials reached out to propose working together. One, Leslie Crandall-Dawes, is an instructor in Pacific's Exercise Science Department, and her colleague, Kisha Jarrett, Artists Rep's audience development and marketing director, was enthusiastic.

The collaboration has been a novel effort, playing on the surveillance themes raised by Orwell at the same time researchers are collecting data that suggests the changing emotional states of audience members. “This hasn’t really been done in theatre before,” Dolphin said.

Because the researchers are collecting reams of raw data, they’re challenged to sift it in a way that can be useful. Do frequent theatre-goers have more subdued emotional reactions than occasional ones? Do people older than 40 have different responses from younger audience members? How about politically liberal people vs. those who are more conservative? Men vs. women? It’s a lot of information to parse with not much time to do it. This run of 1984 started at Portland’s Imago Theatre on Sept. 7 and concludes Oct. 6.

When it’s done, Jackson and Dolphin will report back to Artists Rep, presenting some “very simple findings,” Jackson said. They will use the data they collected to let the producers know what tended to make audience members respond the most, whether, for example, the audience reacted more to scenes of torture or of love.

“This has been a fun project,” said Jackson. “Even the ushers have been getting excited." ■

This study appears in the Winter 2019 issue of Pacific magazine. For more stories, visit pacificu.edu/magazine.