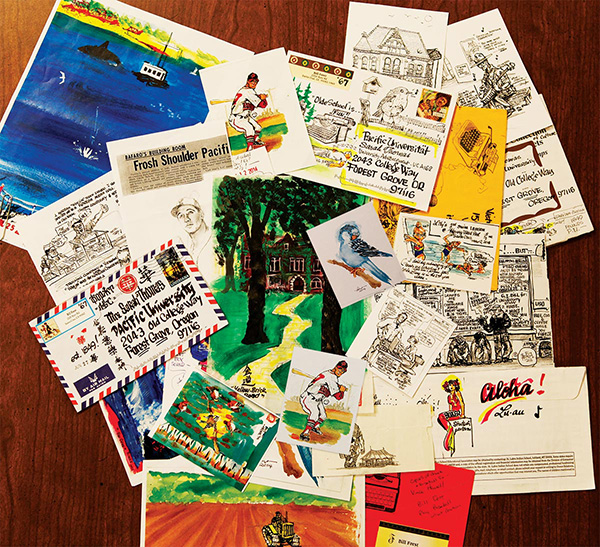 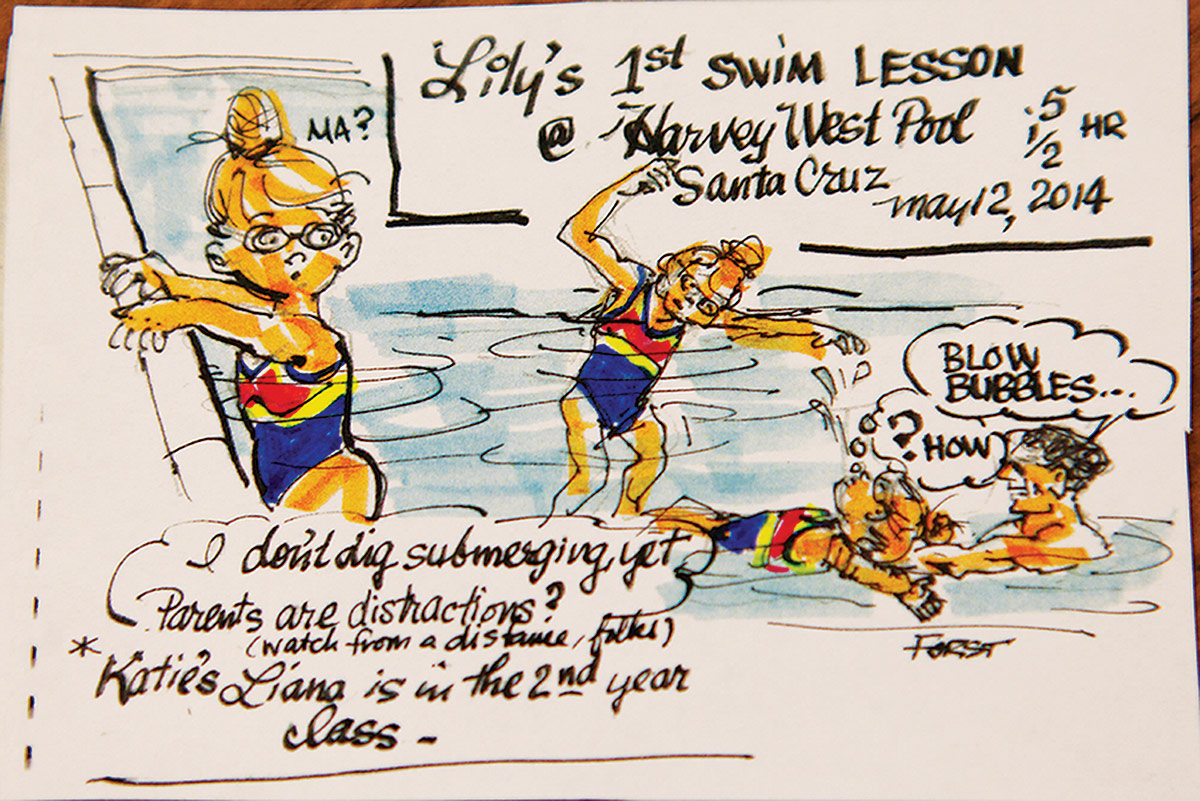 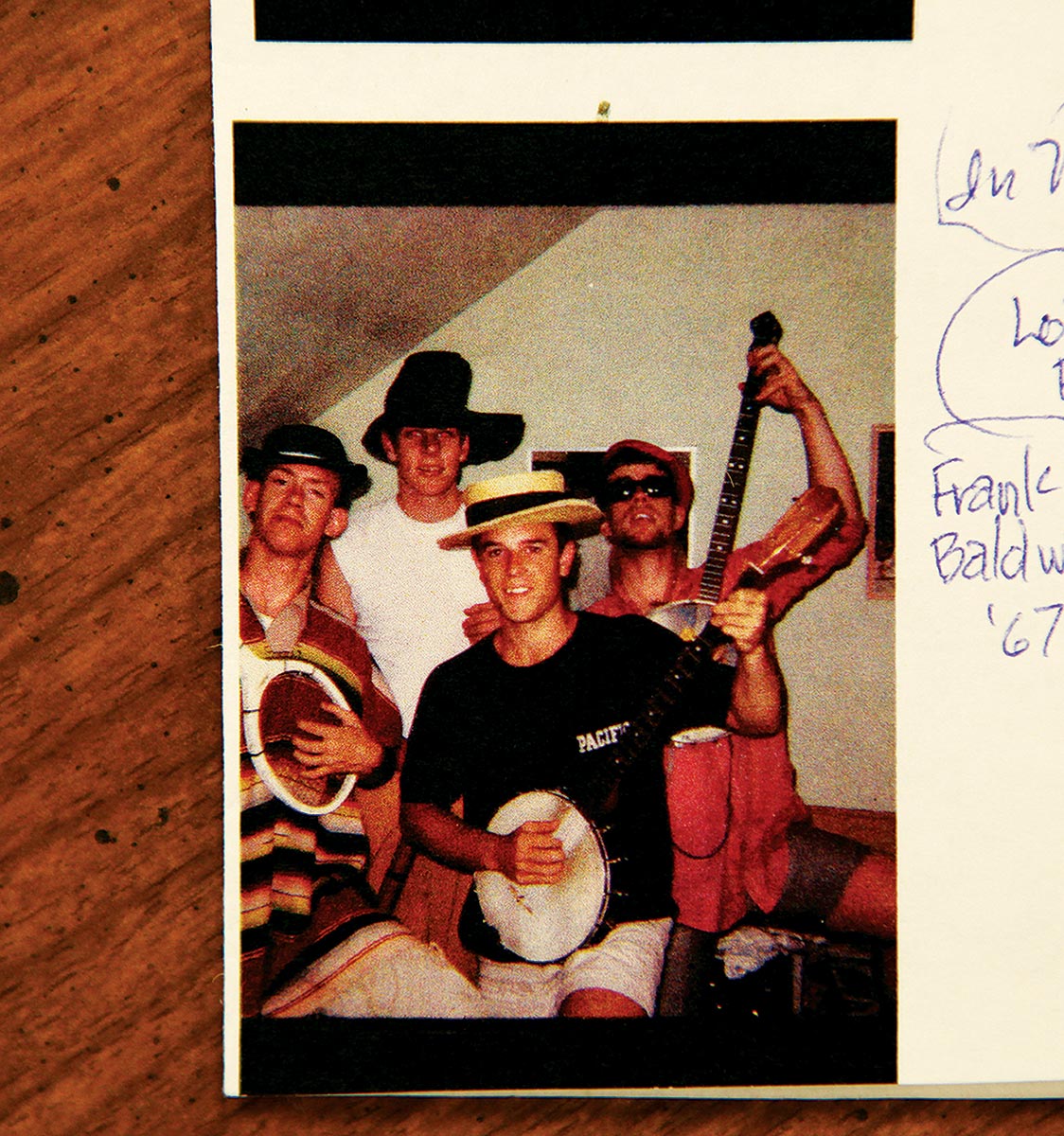 Every couple of months, an envelope appears in the Office of Advancement Services that demands notice.

Sarah Thomas, data coordinator for the office, started noticing these envelopes around 2011 and began corresponding with the sender, Bill Forst ’67.

A self-taught artist with a particular passion for cartooning, Forst bedecks his communications with cartoons, quotes, calligraphy and commemorative stamps. Inside these bright missives, he has sent reams of typewritten memories of his years at Pacific, along with his hand-drawn artwork.

“Some are humorous, some are of events,” Forst said. “Some are anecdotes of my granddaughters, my sons, or visions of what I see.”

Forst, a native of California, never studied art formally. At Pacific, he loaded up on classes in German, Russian and history. He spent a year overseas in Germany — such study abroad opportunities were rare at the time — and he enjoyed strumming his banjo in folk jam sessions in the dorms, serving the community with members of the Intercollegiate Knights, and playing baseball under Coach Chuck Bafaro.

“I can’t have any more praise than that experience,” Forst said of Pacific. “The teachers were like friends. They probably still are.”

His artwork emerged here and there: in silk-screen posters for the Pacific Singers or a MAD-style satire magazine called Prude that landed him in the dean’s office.

His goal, though, was to become a foreign language teacher. After graduating, he earned a master’s in German, then was drafted to serve in Vietnam. When he returned, wife and son eventually in tow, California no longer required students to study a foreign language, and he couldn’t find a teaching job. Instead, he took a job with the local post office, where he worked for more than a decade, and struggled to cope with the post-traumatic stress disorder left by the war.

Art has been a big part of that struggle.

“I went to the mental health clinic at Menlo Park, and they said to pursue the artwork. It’s more like therapy for me,” he said. “Instead of a journal, I do it visually … so I didn’t have to tell the nurses or psychiatrists or doctors what was bothering me. They could see it.”

He still draws the lighter stuff — baseball cartoons in the style of Willard Mullin are a particular favorite. And he does the occasional landscape or portrait on contract.

He also draws memories of Vietnam, “what used to be, what could be,” as well as reactions to current events.

“I try to stay away from some political things, other than what I do to help vets, because I’m experienced with that,” he said — though recently his drawings have been laced with themes of race, authority, and gun control.

His work hasn’t been published much: It’s appeared on a baseball website and in a collectors magazine. More importantly, it’s been an outlet.

He comes up with at least one new idea and sketch a day, and he collects books to learn new styles and techniques.

Bill Forst passed away shortly after this article was published. To read the Memoriam in his honor, go here.

This story first appeared in the Spring 2015 issue of Pacific magazine. For more stories, visit pacificu.edu/magazine.